It’s no secret that I fanboy hard for Andrew Neeme. I’m not alone, either. As of this writing, upwards of 80,000 people have subscribed to Andrew’s YouTube channel, plus he’s got over 11,000 followers on Twitter and another roughly 17,000 fans on Instagram. A pioneer in the poker vlogging space, Andrew has succeeded in attracting legions of people to the game of poker with over 100 fantastic episodes to date. End-to-end, that amounts to dozens upon dozens of hours of net footage that Andrew has captured, edited, curated, and brought to us for our viewing enjoyment. 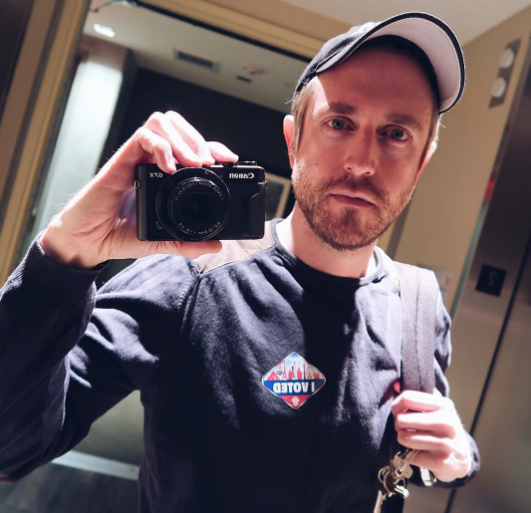 Of course, there’s a lot more to Andrew than just the vlog and vlog-related pursuits, much of which we explored in our in-depth feature interview conducted almost one year ago, which I encourage you to read.

Really enjoyed doing this interview with @cardplayerlife. Can tell some homework was done! Took me down memory lane. https://t.co/9GMo8cjwKi

That said, as per the title of this post, we’d like to wax poetic for a spell about the greatness of Andrew’s poker vlog in particular. So, without further ado, here at the top 10 things we love about Andrew Neeme’s poker vlog.

Subscribe to Andrew’s YouTube channel and you’ll see the world… well, at least a nice little slice of the world where you can play poker. While Andrew lives in the poker hub of Las Vegas and has plenty of action 24/7 year round, that hasn’t stopped him from jetting off to a variety of “poker locales” in the United States and further afield. The game of poker is the same wherever you play, but many of us will never get to see firsthand the inside of poker rooms – much less the cityscape outside the casinos – in Northern and Southern California, New Orleans, Biloxi, and Detroit, that are featured among others in Andrew’s “on location” vlog episodes. 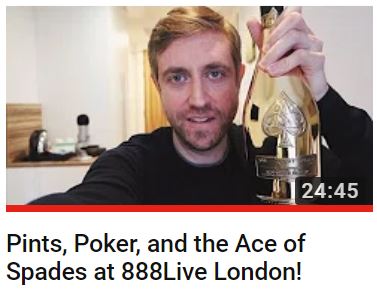 That goes double for Andrew’s international poker stops, which have thus far included London and Barcelona. To point, Andrew has made it a stated goal to play poker on five continents in 2018, with King’s Casino in Rozvadov, Czech Republic, now having been announced as his first stop on the year-long globetrot.

So, for many of us fans for whom poker travel isn’t really possible much of the time, it’s pretty cool to have Andrew be our tour guide and vicariously fulfill our collective wanderlust.

A recurring theme that has popped up in many of Andrew’s videos is charity, and we’re all about that here at Cardplayer Lifestyle. In addition to the ongoing $25 charitable contribution that Andrew makes each time he accidentally forgets to document a hand he wants to share with us on the vlog, Andrew has also helped fundraise for worthy causes a few times. Beyond getting his tablemates to donate towards the causes (sometimes even the dealers chip in with their tips!), he has also galvanized his audience on multiple occasions, with plenty of additional contributions pouring in from viewers via his live stream.

We’re going to have a tip jar near the live table to give to hurricane relief. And for those watching the stream: https://t.co/TaEKYdx3wJ

Closer to (his) home, when tragedy befell Las Vegas in last year’s mass shooting, Andrew stepped up, as it were, with a 6-minute video encouraging his audience to do whatever they could to help. Close to 50,000 people watched the video, which, based on the comments, clearly had a very positive effect.

As mentioned in the introduction, what we see in Andrew’s vlog episodes is the net footage; the final product after his lengthy multi-hour grind sessions in the editing room. To produce that final product, he splices together video captured at the poker table with an intuitive hand history overlay, along with his running commentary. There’s also a good deal of B-roll that Andrew integrates while walking around the casinos, plus some amazing time-lapses and drone footage.

This one might be studied some day in a cinematography classroom. The first 30 seconds alone… great effort, @andrewneeme. Thanks for the entertainment! https://t.co/RvnTF37u0k

Piecing it all together quite frankly just takes a lot of time and effort, but doing so in such an aesthetically pleasing and entertaining way requires the talent of a true artist. Case in point: the mind-blowing first four minutes of vlog #100.

You never know what the next episode will bring on Andrew Neeme’s vlog! Sure, we know there will likely be a lengthy hand history component and by now we’ve “gotten used to” enjoying Andrew’s videography and unique style of delivery, but there’s a titillating (dare I say Pavlovian?) sensation you get when YouTube notifies you that he has released a new video. On the one hand, much like a must-see TV program, you know that you can expect high-quality poker entertainment, but on the other hand, you never know what he’ll throw at you.

Once in a while we’ll be treated to a cameo appearance from poker superstars like Daniel Negreanu, Doug Polk, and Phil Hellmuth. Other times, we’ll get a sneak peek behind-the-scenes of popular poker streams like Live at the Bike! and Bellagio POTS. Sometimes Andrew will “go live” from some random Vegas location, and occasionally we’ll get special gems, like his footage of last summer’s solar eclipse (see below). Five stars, sir, for the continuous creativity!

Back when I was in high school, our student council had a saying: “What’s the only thing better than food? FREE FOOD!”

In an age of digital media paywalls and pay-per-view content, it ought not to be taken for granted that Andrew’s poker vlog is free for all to consume. As we eagerly await and then consume each episode, let’s not forget that Andrew doesn’t get paid (YouTube ad revenue notwithstanding) for doing what he does; he vlogs out of passion, pure and simple. 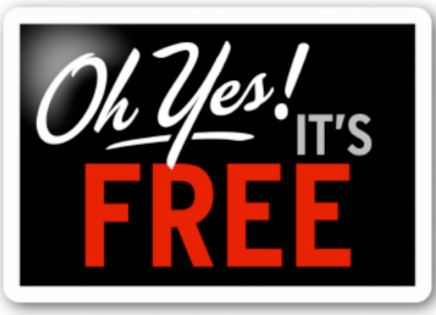 Well, the money has to come from somewhere, right? I kid, I kid. Obviously Andrew is a professional poker player and that’s how he earns his money.

That said, together with his lovely fiancee, Busi, he’s launched ShopAndrewNeeme.com, where you can purchase apparel branded with his favorite catchphrase. From hats to hoodies and much more, purchasing Favorable Apparel is a great way to show Andrew some love; I highly recommend checking it out.

Favorable Apparel makes this list because it was launched – where else – on the vlog. Check it out below.

4. We’re Along for the Ride

While Andrew might be the one doing the grinding at the tables, the traveling, the editing, and living the life captured in the vlog, we are all undeniably strapped in to the passenger’s seat. Part of the beauty of having a combined following of 100,000+ on social media is how easy one can engage with said followers. Andrew is a true champ at that, always responding to comments on all platforms, even integrating Q&A sessions into the vlog itself.

Beyond the virtual realm, however, recently Andrew (together with fellow vlogging buddy Brad Owen) has started to make the effort to bring the Vegas poker experience to life for the viewers in the form of MUGs. The reviews I see from those who’ve participated are always positive, often peppered with FOMO posts from those who’ve narrowly missed out on attending. Of course, MUGs experiences are often worked into Andrew’s vlogs post-facto (assuming that there hasn’t been a bit too much, um, “imbibing of the spirits”). 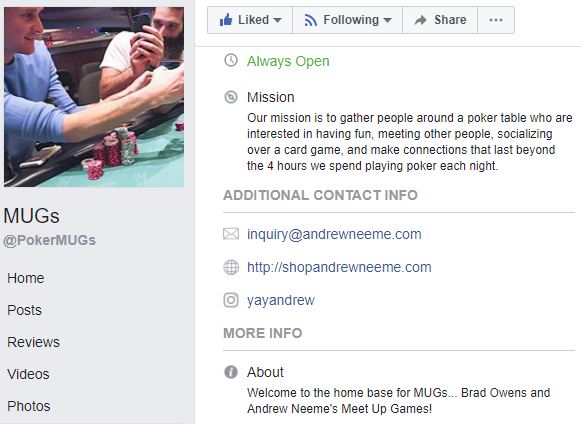 I don’t know what chemical gets activated in my brain when I watch Andrew’s mailbag videos, but there’s just something I find riveting about watching him open up the various cards and packages sent to him by fans all over the world. Sometimes the letter- and package-opening sessions figure as parts of an edited vlog episode while at other times they’re done live, on-the-fly.

During these sessions, Andrew is often accompanied by Busi, whose reactions to the contents of the mailbag usually fall somewhere within the range of “adorable” to “priceless.” 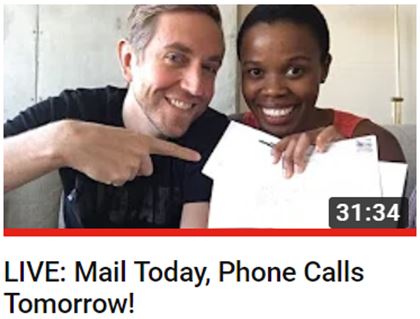 Sometimes fan gifts are as simple as a heartfelt letter of appreciation for Andrew’s work, and often they’ll be accompanied by a low-denomination poker chip from the sender’s local poker room. As a poker chip collector myself, that’s something that really resonates and brings a smile to my face. Other unique gifts have included interesting perishable items like chocolates and cookies from the sender’s home country or even a giant 5-pound bag of Skittles. Sometimes the mailbag gifts are truly incredible, ranging from stylish letter openers to bottles of champagne to a box full of high-end videography equipment and even generous cash “tips” of up to $200!

Las Vegas gets over 40 million visitors each year from all over the world. It’s America’s adult playground and a place that so many of us poker lovers hold near and dear to our hearts. Yet, even if you’ve visited Vegas numerous times, there’s likely much of the city that you haven’t been exposed to.

Enter Andrew Neeme’s poker vlog. Besides taking you to some of the more “off-the-beaten-path” poker rooms around the city, Andrew has become a de facto ambassador for the city itself, giving us tours of various eclectic bars, restaurants, and other hotspots we’re otherwise unfamiliar with.

Always camera-ready, whether the perspective is from the side of his car, Downtown, a suite overlooking the Strip, or his drone, thanks to Andrew Neeme, we all look at Vegas a bit differently now.

Much like one of his self-confessed inspirations, uber-popular YouTuber Casey Neistat, Andrew so effectively uses the medium of film to tell some fantastic stories. When you strip away production value and break a hand history down to its bare bones, for someone to find a 10- to 30-minute video interesting time and time again, you have to tell a story. A story is what makes it more than a video but rather an “episode” in an ongoing journey.

I’ve watched every minute of the 100+ poker vlog episodes Andrew has created and his storytelling continues to improve from one episode to the next. One of his most recent videos features some of his finest storytelling to date. I won’t go into further detail other than to say that if you spent the next 16 minutes watching the video below, I couldn’t blame you. The story very much speaks for itself.

There are plenty more reasons we all love Andrew’s poker vlog, beyond the “top 10” listed above, but underlying those feelings is an endearment to Andrew himself. In producing and sharing all those videos with us, Andrew has given us a window into his life and one thing is crystal clear: what you see is what you get.

the @WSOP is great and all, but for our money some of the best poker viewables these days are @andrewneeme‘s vlog https://t.co/wcmkzT8fuP

I’ve long held that “you can’t bluff awesome,” and by the same token it would be impossible to “bluff happy” in 100+ videos. That inimitable Neeme smile is ever-present and unceasing, whether he’s won or lost at poker, whether he’s on a downswing, upswing, or “just rounding.” Here’s a man who knows not only how to enjoy life, but to make the most of the hands he’s been dealt in every possible way.

Cheers to your success, Andrew. May you continue to inspire us through your passion.

One might say that dinner tonight was… favorable! ? Thank you @andrewneeme for being a good friend. Great to finally have met in person. pic.twitter.com/PWBqBYGuwW