PokerGO Original Series: Stories From the Felt | A Review

Before watching PokerGO’s “Stories From the Felt,” I had never thought that poker could make me cry. Or, at least, I never thought hearing about somebody else playing poker could make me cry. But that’s exactly what I found myself doing after watching what is without a doubt one of the most entertaining, fun, and revealing series you’ll ever watch about the game we all love.

An Examination of History, Culture, and Psychology

Each episode of Stories From the Felt takes a single person, place, or event from within the poker world and explores not just the story of what happens, but also explains its impact as a cultural and personal phenomenon.

There’s the episode on The Mayfair Club, which gives you an inside look into one of poker’s most iconic underground games. What I really enjoyed about this episode was its focus on the club as a tangible manifestation of poker’s transition from the shadowy periphery of the American gaming scene to the very beginnings of what would become the modern, global phenomenon we know today.

If you’re not one for history and nostalgia, but love to hear about the crazy ways in which poker unexpectedly brings out the best in us, you’ll love the episode on the now famous “Bike Bet” between Dan Bilzerian and Brian Rast. It gives Rast’s deeply personal account of just how deeply he had to dig within himself to accomplish an incredible feat of human will and endurance. On the one hand, it’s an excellent window into gambling culture and the type of person who is able to succeed at high-stakes poker. On the other hand, it’s just a fun story about one of the craziest prop bets to have ever occurred in the poker world.

In my opinion, however, the most impactful episode of the series is the one featuring Greg Merson entitled The Wake-Up Call. It chronicles his initial struggles with drug addiction, his getting clean, subsequent relapse, and final triumph over the demons of substance abuse. Putting a human face on an often faceless problem, it highlights the idea that poker as a game can be used to instill discipline, combat nihilism, and help a person find an empathetic and loyal community of friends. It had me tearing up by the end. You can watch the episode below, in its entirety.

Topics of the other episodes include:

The Stories Behind The Game

What makes Stories From the Felt so enjoyable to watch is that it’s a series that oozes passion.

As a poker player and fan what’s so enjoyable about the episodes as a whole is the way they capture all the different emotional aspects of the game that go on behind the scenes. The ethos of the series is not to talk about the game of poker per se as much as it is to talk about the real human beings who play it. 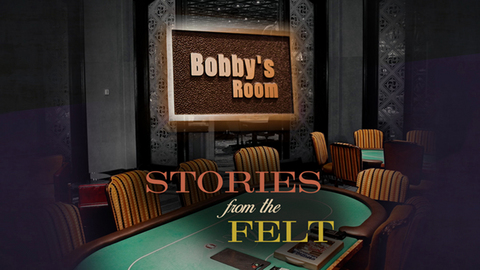 In that sense, the title of the series is actually a bit ironic. Stories From the Felt really has nothing at all to do with what goes on at felt. The felt is just the vehicle; a mirror that reflects our own hopes, fears, friendships, ambitions, failings, triumphs, and ambitions back to us both at the table and away from it.

It highlights the impact that poker can have on the lives and imaginations of those who transcend playing the game to actually living it.

The Big Picture of Poker

In an era of cheap and easy entertainment, it’s easy to see poker as a lot of very cynical things: A get rich quick scheme that can lead to gambling addiction, a forum for scammers, or even just another petty distraction in a nihilistic world.

What I ultimately loved about this series is that it is infused with optimism, hope, and humanity. By highlighting the positive and creative potential of the game, it puts poker back in what I believe is its rightful place; not as something that controls us, but as a vehicle through which we can express ourselves.

At face value, Stories From the Felt is just an informative, fun, and heartfelt look at some of the more interesting stories to come out of the poker community. At 5-10 minutes an episode, it will keep you interested and entertained while you have your morning Cheerios. But just beneath the surface of all that, there is an undercurrent of meaning that gives deeper insight into what makes this game so fascinating to so many of us.

Bottom line: This is a series that you don’t want to miss.