For poker fans, among the most entertaining and exciting things about the game is watching and learning about the people who play it professionally. No matter how many people are drawn to the game by its promises of competition, money, and world travel, the personalities of its most iconic players are what has kept the game relevant in popular culture.

PokerGO’s Pokerography series tells us the stories of those players in a way that is fun, entertaining, and will appeal to both casual and serious players alike. 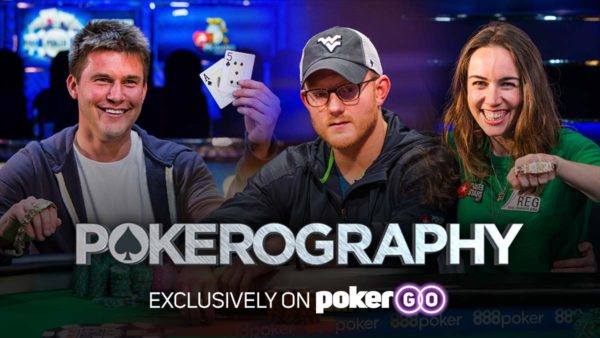 The series’ format is to present a biopic approximately 20 minutes long that outlines the life and poker career of a famous player. I was actually really impressed by the level of thought and detail that went into creating each individual episode. My expectation was that these episodes would basically serve as glorified YouTube videos with a little higher production value, but which ultimately wouldn’t really provide much substance other than a brief overview of famous poker players’ careers. Speaking of YouTube, however, some full episodes have been made available to watch for free, like Michael Mizrachi’s, below.

Ultimately, I really loved these 20-minute shorts. There were a great format choice because they allow the creators to tell a more fulfilling and robust history of the person, without having to skimp on the details that make a poker life and career really interesting.

A Story with Personality

It’s this melding of the personal lives of poker players with the game that we can relate to that gives us a special window into how the two interact. We’re able to see how our favorite poker personalities not only interject their personality to the game, but also how the game enhances their personality.

The episodes don’t just focus on the actual poker playing, but also inject a lot of human interest type content into the biopic. So, while there’s definitely a lot here for those looking to hear about the big scores and huge tournaments, there’s also a lot of very human information about the lives that these people have led. Any episode provides a representative example of this, but you can take in Jason Mercier’s right here, below.

By the time you finish each one, you really do feel as if you’ve learned a little bit more not just about the poker career of the player, but also about the challenges that they’ve faced in their lives and also what really makes them tick as human beings. At the end of the day, I was really pleasantly surprised by the quality and substance of the series as poker entertainment for poker fans.

Many of Your Favorite Players Are Here

Another thing that really exceeded my expectations was the sheer number of famous players who were willing to sit down and have a biopic made about them. It’s also impressive that PokerGO was able to create a series about players from such a wide swath of the poker community, with many different eras of the game, as well as many different types of poker players and personalities, represented.

So whether you’re looking to hear the story of an old school gambler turned modern-day poker businessman like Mike Sexton, or prefer the tale of a born math genius like Isaac Haxton, Pokerography gives you a glimpse into the lives and adventures of the multitude of personality types that make up the modern game of poker.

Interestingly, while the individual episodes of course stand alone, once you start binge-watching multiple episodes you begin to gain an appreciation for the very colorful tapestry of just how rich and diverse the professional poker community is. In this way, Pokerography is actually a really fun way to completely immerse yourself in poker culture.

A Fun Experience For Any Poker Fan

Overall, Pokerography is definitely more lighthearted than some of the other series that you’ll find on PokerGO, but that shouldn’t be confused with “lacking substance.” At about 20 minutes apiece, with 20+ episodes, that means close to eight hours of viewing to get through the entire series. With that said, I don’t feel I wasted a single moment, as I got a true sense of all the fun and thrills that come with being a modern professional poker player.

And again, beyond all of that, there’s also a lot of very interesting personal detail that any poker fan will really enjoy, learning what it is that makes their favorite players tick. Plus, it seems like this is a series that PokerGO will keep on adding new episodes to. I’m excited to see which players will be profiles next!

Overall, I highly recommend this series to anybody who has ever found themselves wanting to know more about the poker legends of our time.