When I found out that PokerGO had produced an original comedy series starring Saturday Night Live alum Chris Parnell, I had high hopes. I’m a sucker for a well-written ensemble comedy a la M*A*S*H, Disjointed, or The Big Bang Theory.

Unfortunately, what I ended up watching was the comedy equivalent to the poker movie Lucky You. 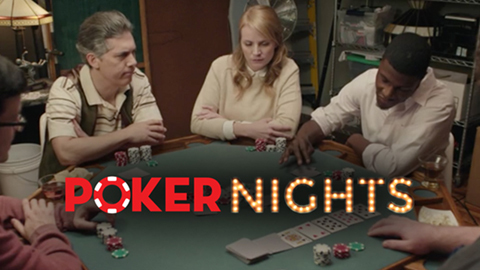 Poker Nights is an original comedy short-series that takes a look at home poker games. Chris Parnell headlines the cast and plays Orson, a player who is the resident fish and oddball of the group. Some of you may remember Parnell from his portrayal of Harold Melvin, “The Lonely Genius” in The Grand.

Joining him in the series are Dan Chamberlain, Emily Tarver, Neko White, Wes Haney, and Richie Moriarty. Tarver is perhaps the most well-known cast member outside Parnell, with parts in Orange is the New Black, The Residuals, Donny!, and VH1’s Best Week Ever to her credit.

Poker fans would also likely be interested in giving the show a watch as none other than Phil Hellmuth, the all-time WSOP bracelet leader, has a guest starring role in one of the episodes.

A weekly poker night with a very special guest. Watch #PokerNights tomorrow only on PokerGO. pic.twitter.com/PBbynfJ3E6

The series is a situational comedy surrounding a regular home game played in the basement of Liz’s home. The poker is secondary, and according to the show’s premise, hilarity is meant to ensue over the various situations that arise at each game.

Anyone who has played home game poker will identify with some of the situations in the series, but overall the series is unfortunately lacking in humor, due in part to the short-series format.

Poker Nights did a great job portraying a small home game atmosphere. I’ve played in home games where the poker room/basement setup was exactly like the one you see in the series. This, of course, makes sense for a show produced for a poker network. 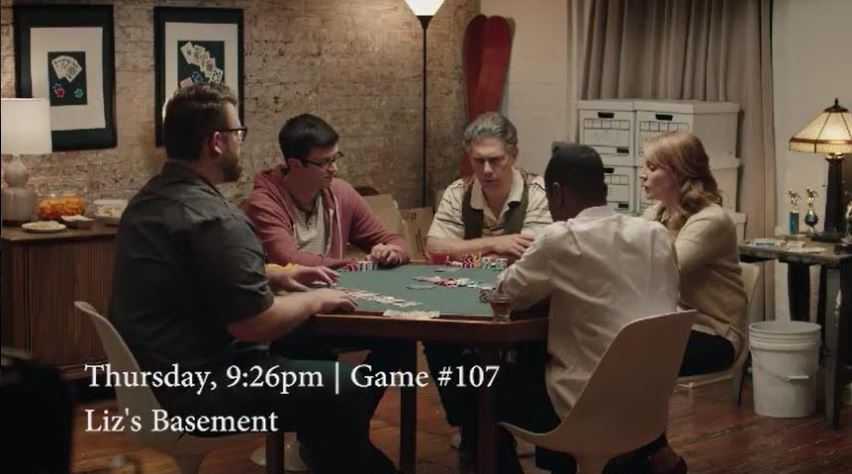 The setting for Poker Nights

Out of the cast, Chris Parnell and Neko White seemed the most natural out of the group. Parnell did a great job portraying the oddball and resident fish of the group. I felt White was the most believable of the regulars and seems like that “one guy” that anchors the average home game.

Next, while I was not a big fan of the series as a whole, a couple of episodes kept it from being a total washout (and no, I am not talking about the Phil Hellmuth episode). Episodes 3 and 5 were the bright spots in my opinion.

In episode 3, the group’s discussion focuses on the actual value of a baby. Ever heard someone say they would bet their first born child at the tables? Well, now you can figure out how big of a bet that would be. In Episode 5, home game poker meets multi-level marketing, so you’ll get a few smirks watching that one.

Both of the aforementioned episodes were more along the lines of what I felt this series could have accomplished, but sadly they only represented one-third of the total product.

Firstly, I think that the short series format for Poker Nights was a huge mistake. In all honesty, it is hard to call this an actual “series” because of the brevity of each episode. When I first heard of the series, I was expecting 22-minute episodes, like many situational comedies.

Instead, Drawing Dead is comprised of six five-minute bite-sized episodes that felt more like glorified webisodes or YouTube clips than a proper series for a streaming service. The main problem with brief episodes like this is that everything has to be crammed in and the quality of the overall product thus suffers. 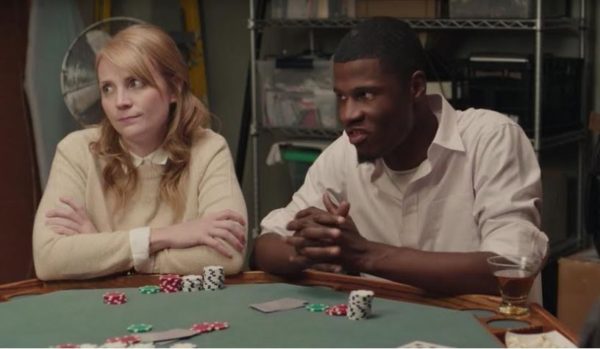 Liz and Zach, played by Emily Tarver and Neko White

For example, those watching the episode would have no clue whatsoever about the names of half the characters as they are never mentioned, nor are they listed in the credits. Lack of character development – again due to each episode’s brevity – means that it’s impossible to know anything interesting about Donny (Chamberlain) or why is Liz mad all the time.

If I had been asked for input during the show’s production, I would have suggested a few more minisodes where each character would be explored in a mockumentary interview style, a la Modern Family. Get a little backstory and interaction with them, so you know a bit more about what makes them tick, and that would help you buy in much more readily once the characters all sit down to play in the home game.

I must say that I found the ongoing gag with Bob (Liz’s husband) rather unfunny and pointless. By the end of the series I was ready to see him tell Liz to go “f**k herself.” 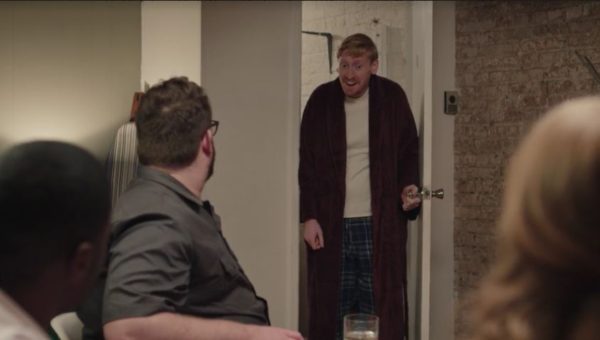 Liz’s husband, Bob, makes a regular appearance towards the end of each episode

Also, I’m a bit surprised at the way the ONLY female regular in the show is portrayed. She acts like she hates everyone, including her husband, and just seems generally annoyed all the time. This seems a poor portrayal of female poker players. The only other female to show up in the show is portrayed as crazy. Not a great way to make women feel respected and included in poker, folks.

In many episodes – once again, due to their brevity – a lot of the jokes felt forced to the point that it felt more like bad acting than it did comedy that was supposed to be “over the top.” While comedy is of course subjective, you can’t force it down people’s throats without it hurting the product.

I think that if the show had been given more breathing room, via longer episodes, the jokes would be far more likely to hit their marks.

Not a Game I’d Return To Unless Changes Are Made

As you can probably tell by now, I was disappointed with how this series turned out overall. I didn’t expect M*A*S*H or Modern Family-level comedy, but I was hoping that it would be at least average. I hate to say it, but the only saving grace is that it is a short-form series and I only had to spend about an hour watching it altogether.

I’d rate Poker Nights 2 stars out of a possible 5 only because of the third and fifth episodes. The Hellmuth episode (#6) is OK, but it failed to move the needle for me. In its current format, it is hard seeing this getting a second season, nor do I think it deserves one. If, however, the format were to change or even some characters replaced, it might be worth revisiting. Otherwise, PokerGO might want to stick to other forms of original programming.