Poker and the Evolution of the Slot Machine

Generally speaking, poker is one of the more advanced gambling games. Players have the ability to make whatever kind of bets they like as well as pulling rouses on their opponents in the form of bluffs. Slot machines are right at the other end of the spectrum – these are games that operate on dumb luck, which you need no skill whatsoever to play. However, both these games are more linked in casino history than you might realise. 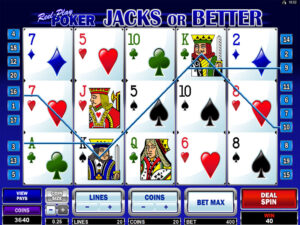 Origins of Poker and Slot Games

Believe it or not, the very first slot machines were in fact poker machines. Just as poker history is quite murky, with many countries claiming they first came up with the game that’s now popular the whole world over, the origin of slot machines is similarly murky. One thing is for sure, however, which is that according to gambling historian David G Schwartz, poker machines were a big deal in the 1880s. These games consisted of five drums onto which the whole deck of cards were spread minus the 10 of hearts and the jack of spades – to cut down on the number of jackpot paying royal flushes available from the games. Players would spin the reels and if they came up with a pair of jacks or better, then they’d win a prize that would have to be delivered via hand-pay to the player, such as a cigar or a round of drinks. Interestingly enough some historians even claim that the word “jackpot” is derived from these games as a portmanteau of the words “jacks” and “pot”.

It was San Francisco gaming engineer, Charles Fey, who took these games and came up with the idea of creating a completely mechanised machine. Obviously the technology to create a fully functioning poker game did not exist at the time, so the best he could come up with was a three-reel game with 10 symbols on each reel known as the Liberty Bell. However, the origins of the slot game have not been forgotten. You will notice the majority of today’s online casino machines have five reels to represent the five cards in a poker hand and a large number of these use the high cards from the poker deck as symbols on the reels. 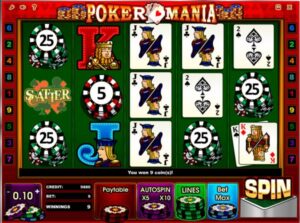 Poker and Slots in the Modern Era

This wasn’t the last time poker would flirt with slot machines either. In the 1980s, whilst games like Frogger, Pac-Man and Space Invaders were capturing the imagination of the public, many of the most innovative minds in casino gaming claimed that the gambling audiences simply wouldn’t trust a computer-based game with their money. One man proved them wrong – Si Redd, president of SIRCOMA (Si Redd’s Coin-Operated Machines), whose company developed the first ever computer-based gambling game, video poker. Within months of the first machines appearing on the Las Vegas Strip, they soon came to dominate, showing that Vegas was indeed a city unafraid to try their luck against a microprocessor.

These video poker games paved the way for the huge slew of computer-based slot machines, which were helped along by the introduction of the virtual reel. Although you can still play many different video poker variants at both online and land-based casinos, these are nowhere near as popular as the wide range of slots that are now available. Many of the double or nothing card games that feature on lots of online slot machines owe their heritage to the video poker games that were the first to offer players a 50/50 chance to double their winnings for correctly guessing the colour of the next card off a virtual pack. Without video poker, modern slot machines as we know them simply wouldn’t exist. Even though experts such as Michael Shackleford (Ed. Note: The famed “Wizard of Odds”) are constantly telling us that you can get better odds and returns from video poker, it still seems that slots are the undisputed rulers of both land-based and online casinos.

Ultimately, poker is all about making the best combination possible out of five cards; similarly, slot machines are all about making the right combinations too. It’s strange to think that even though these games are so different, one has practically given birth to the other. You can now even play slot machines at some online casinos that are completely themed around poker and scoring in poker hands, making the circle complete.

When it comes to gambling games, there’s nothing that David Newstead won’t try his hand at, although it’s slot machines that have a special place in his heart. To read more of his game reviews and opinions, why not check out his site www.slotsonline.co.uk.