One of poker’s all-time greats has done it again, in grand fashion. Phil Ivey just won his 9th World Series of Poker bracelet in Event #3 ($2,200 8-Game Mix) at the WSOP Asia Pacific. Ivey emerged victorious from a small, but elite, field of 81 players in the 3-day event and also added $51,840 to his all-time winnings. Along with Daniel Negreanu, Ivey co-headlined the event’s final table and was the chip leader heading into the final day of play. To seal the deal, Ivey overcame Brandon Wong in a lengthy heads-up battle (Negreanu finished in 4th place). 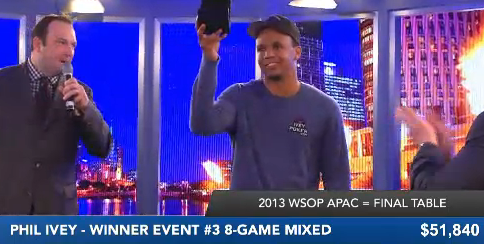 The win catapults Ivey into a tie for 3rd place on the all-time WSOP bracelet list (with the late Johnny Moss), ahead of Erik Seidel, who has 8 bracelet wins to his credit. Up ahead of him are Doyle Brunson and Johnny Chan, who’ve each won the WSOP Main Event twice and have won 10 bracelets apiece.

Though Brunson and Chan are clearly still playing plenty of poker, they’re thought to be past their tournament poker primes, with each of their last bracelet victories coming years ago. Seidel still has plenty of excellent poker in him, but his last bracelet win was back in 2007.

Which means Ivey’s main competition for “best tournament poker player ever” is Phil Hellmuth, who’s currently the all-time leader with 13. With both Phils clearly still at the top of their game and having plenty of prime poker playing years ahead of them, the bracelet race is going to continue being thrilling to watch for all poker fans worldwide.

A Master of All Poker Disciplines

There’s a reason why Ivey is widely considered to be the best all-around player in the game. He’s had millions of dollars of success worth of victories, both in cash games as well as in tournaments. More importantly, however, he’s demonstrated unparalleled excellence in literally all forms of the game of poker. This is nowhere more evident in the variety of bracelet events that he’s won, and of course the fact that his latest bracelet win is in an 8-game mix event.

By comparison, Hellmuth is surely a poker tournament “beast”, but 12 of his 13 WSOP bracelet wins have come in Texas Hold’em events. That said, the “Poker Brat” has also demonstrated his fair share of skill in non-hold’em events.

Notably, though this is Ivey’s first bracelet win outside of the United States, it’s not his first tournament poker success in Australia. Back in January 2012, he won the prestigious Super High Roller event at the Aussie Millions for a $2 million score. The win does, however, make him the first poker player in history to win bracelets on both U.S. and Australian soil.