Talk about a headline that writes itself! Much like professional wrestling fans, poker fans love to imagine dream matchups of their favorite players duking it out at the felt. And when it comes to a poker fan’s dream matchup, the names Daniel Negreanu and Phil Ivey almost always have a way of fitting into the picture. Well, those dreams have essentially come true in an incredible fashion: Ivey and Negreanu have both made the final table of WSOP APAC Event #3, the $2,200* buy-in 8-game mix. 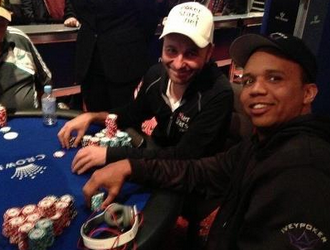 Picture of Negreanu and Ivey from @realkidpoker Twitter feed

Both poker pros will be gunning for a coveted bracelet in just a few short hours, when Day 3 of the event gets underway in the Crown Casino in Melbourne, Australia. On top of that, the two of them combined have more than half the chips remaining in play, with Ivey leading the way (144,300) and Negreanu close behind in second (129,000). They’re even seated next to each other!

Not only are Phil Ivey and Daniel Negreanu two of the most popular and well-known players in the game, they’ve also each got the poker accolades and WSOP hardware to back up their fame. For his part, Ivey’s gunning for his 9th bracelet (his first since 2010) while Negreanu is shooting for his 5th (his first since 2008).

Who Cares About the Money? Ship the Bracelet!

Indeed, it seems that first place prize money of over $50,000 is very much secondary to the prestige of a bracelet win for these two poker titans (especially as it’s likely that Ivey has probably made a good amount of 6-figure bracelet bets). To be sure, only 81 players entered the event, but the lineup represented poker’s most elite pros; the fact is that you don’t pony up a couple thousand bucks to play in an 8-game mix event unless you’re pretty darn good in all the poker disciplines being played: No limit Hold’em, Pot Limit Omaha, 7-Card Stud, 2–7 Triple Draw, 7-Card Stud Hi-Lo, Limit Hold’em, Razz, and Omaha Hi-Lo.

I for one can’t help but wonder what it’s like to be one of the other 4 players seated at the final table. Sure, you’ve managed to cash in a tough event, but to win you’ve got to overcome arguably the two best players in the game. It’s a wonder that none of them has stood up and waved the white flag. Anyhow, no disrespect to any of the other final table participants, but the fact is that what’s best for poker, and what poker fans want to see, is a heads-up match of epic proportions between Negreanu and Ivey.

That would sure make for one hell of a televised broadcast and WSOP organizers must be secretly hoping for that outcome. If you want to follow the event yourself, check out the live updates on Pokerlistings or the live stream on 888PokerTV.

Who are you rooting for to win the bracelet? Let us know in the comments section below or on our Facebook page.

*All dollar amounts are listed in Australian dollars. AUD$1 = USD$1.05 as of this publication.