This year’s LA Poker Classic marks the 20th year in succession the 50-event poker tournament series is being held. As always, the $10,000 buy-in main event has attracted some of the biggest names in poker, with 549 entrants creating a prize pool of almost $5.3 million. Standing out among the rest of the names is Phil Ivey, who is playing in his first poker tournament on U.S. soil in almost a year. Ivey, who has had one hell of a year, skipping the 2011 World Series of Poker, making headlines for his divorce proceedings, and finally getting back to his winning ways at the Aussie Millions Super High Roller last month, has made it to Day 3 along with 181 other players. 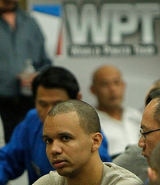 Should Ivey manage to repeat his success from 2008 and win this prestigious tournament again, he would walk away with almost $1.4 million as well as a seat in the $25K WPT Championship to be held at the Bellagio in May. Though he finished Day 1 in the top 5 in chip counts, Ivey currently sits in the middle of the pack with a slightly above-average stack of 106,000. About 10% of the field will cash, with the top 54 players earning a minimum of $21,080.

Vanessa Selbst Wins $5K Side Event after Chop with Duhamel

The other big story at the LA Poker Classic was the stacked 98-player field in the $5,100 No Limit Hold’em event. Only those who made the final table cashed and it featured a lineup of some of today’s hottest young poker players, including Josh Brikis, Matt Stout, Faraz Jaka, 2010 WSOP Main Event Champ Jonathan Duhamel, and Vanessa Selbst. Selbst and Duhamel had the 2 largest chip stacks entering the final table and were the last players remaining. They made a deal to chop the prize money (about $130K for Selbst and $121K for Duhamel) and play on for the remaining $10,000 and the title. Treating the extra $10,000 as though it were play money, Duhamel got his stack all in with a measly 3-7 offsuit, only to be called by Selbst’s superior 10-8 offsuit, which held to give her the win.

Duhamel’s performance gives him an incredible 6 final table appearances already this year, four of which were for six figures, and a total of almost $1.35 in live tournament winnings.

Just wish to say your article is as astounding. The clearness for your post is just excellent and i can assume you’re knowledgeable in this subject. Fine together with your permission let me to grasp your feed to stay up to date with forthcoming post. Thank you a million and please continue the enjoyable work.