New Contenders for the Throne: The Future of Poker Might Not Be in Hold’em

Texas Hold’em has become synonymous with poker. If you’re talking about poker these days, everybody’s just going to assume you’re talking about Hold’em, unless of course you’re playing a casino poker variant at a land-based or online gambling establishment like Grande Vegas online casino. Texas Hold’em has been dominating cash game and tournament tables for a decades now, earning itself the nickname “the Cadillac of Poker.“

It isn’t hard to understand why Hold’em has seen such sudden rise through the ranks. Of all poker variants, it offers the best balance between simplicity, strategy, and action. The rules of the game are easy to learn, the no-limit aspect of it provides for some great gambling opportunities, and it offers more than enough strategic considerations to provide plenty of edge for serious students of the game.

What initially made Hold’em so popular is the fact that it is the perfect tournament game for audience viewing, and most people who play and are fans of the game caught the poker bug watching large televised/live streamed tournaments such as the WSOP Main Event or big EPT final tables.

However, times may be changing with other poker variants gaining on Texas Hold’em in terms of popularity. Over the last couple of years, we’ve been seeing some contenders for poker’s throne and it isn’t completely inconceivable that the future of poker will showcase a different game altogether.

Has Hold’em Run Its Course?

Hold’em is the game often dubbed as requiring “a minute to learn and lifetime to master,” a statement that definitely rings true. Learning how to play versus learning how to actually play well are two entirely different things, and for years there’s been a huge discrepancy between the two. This created an atmosphere where those who knew how to play could put their skills to good use and earn money, while the “fun players” were there to gamble it up.

The problem Hold’em seems to be facing, however, is that the first group (highly skilled players) has grown big, while the second group is diminishing in size. More and more players taking up Hold’em have a pretty good idea of at least basic strategies. Many of those who used to enjoy gambling at the poker tables have lost a lot of motivation to sit at the felt and play Hold’em due to the fact it no longer feels like they’re gambling, but rather that they’re donating money to good players waiting for them to make mistakes.

5 Card Stud used to be THE GAME! It got mostly solved and 7 Stud came around.

The most popular game used to be limit Hold’em by a mile. It died mostly.

Game variants lose their luster. Happens all the time.

This isn’t to say that Hold’em is dead – far from it. But there’s definitely the feeling in the air (at least from what I’ve seen and heard from numerous poker player friends and colleagues of mine all over the world) that the game is just not as appealing as it used to be a decade ago. This definitely opens up possibilities for a new poker variant to take the lead and provide players, especially recreational ones, with new opportunities to gamble and chase their luck instead of being run over by experienced Hold’em players.

The recent trend in high stakes games, especially ones played in Europe (King’s Casino in particular) has seen more and more Pot Limit Omaha (PLO) games thrown in the mix. When it comes to cash games, PLO definitely brings back some of those elements Hold’em is now “missing” for several reasons:

PLO allows players to see many more flops (whether this is actually advisable with regards to the optimal strategy is another matter entirely). Omaha is a flop game and you’ll rarely see hands end before the flop (which is a frequent occurrence in Hold’em). So, simply put, recreational players are getting much more entertainment for their money. These days everyone knows that playing 7-2 won’t get you far in Hold’em. A hand like 7-2-6-4 in PLO, on the other hand, looks much more playable.

In a sense, PLO is much more forgiving if you play a wider range of starting hands because pre-flop equities are much closer, so it is much harder for your opponents to have you completely crushed. Although pocket Aces are still one of the best starting hands you can get in Hold’em, AAxx gets cracked much more often in PLO.

Finally, even good Hold’em players transitioning to PLO still don’t have all the strategic aspects figured out. This means that recreational players actually have a much better chance to win more frequently. This brings back the excitement that’s been somewhat missing from Hold’em games lately. In PLO, everyone seems more willing to gamble!

A game that’s been picking up some traction lately, Short Deck (or 6+) Hold’em definitely has a chance of being a contender for poker’s most popular variant in the future. Popularized by ultra-high stakes players in the fabled Macau games, Short Deck has been making its way into the mainstream. Thanks to the live streaming of Triton high stakes games, many poker fans are getting to witness this fairly new poker variant in action.

6+ Hold’em has a few things going for it:

Like PLO, Short Deck Hold’em is a game where less experienced players have a statistically better shot at winning than they do at Hold’em. Of course, good players will always have an edge, but the very fact that a hand like J10s is virtually flipping against a hand like AK clearly shows that 6+ Hold’em is a much more forgiving game.

It is also a game where players are much more likely to see flops and continue from there. Once again, this adds to the entertainment factor for players just looking to have a good time. One of the biggest reasons traditional Texas Hold’em has lost much of its appeal is that more often than not, solid players just don’t want to play marginal hands in big pots anymore. In Short Deck poker, most hands are marginal in a way, so there is much more opportunity to play without being completely crushed by your opponents’ holdings.

Lately, we’ve seen PokerStars experiment with some fresh takes on traditional Hold’em, trying to add some spice and variety to the game. It isn’t completely out of the realm of possibilities that one of these variants – or even a completely different one, created by some other entity – will eventually take hold with players.

For a new poker variant to become popular, it is usually necessary for well-known players to endorse it, promote it, and start playing it regularly. New players are likely to flock to games they see on TV (or online on YouTube and Twitch), so there could conceivably yet emerge a new poker variant that will come out swinging and change the poker world as we know it.

Granted, this isn’t very likely to happen. For example, Open Face Chinese Poker experienced a spike in popularity for a couple of years and it seemed like it could catch on and spread further, but it just didn’t have enough to offer to make it a real sensation. The Hold’em explosion back in the early 2000s was really unprecedented, so the bar is set very high for any potential contender.

Even if there is a new game that catches on with legions of players, Texas Hold’em will likely always remain the number one tournament poker game. As already mentioned, it’s just perfect for tournament play and it is hard to see any other game really taking its place.

Moreover, for as long as Texas Hold’em remains the game featured at the final table of the WSOP Main Event, it will remain popular. Large-scale tournaments of that nature still attract the highest number of poker fans by far, so Hold’em isn’t really going anywhere anytime soon. 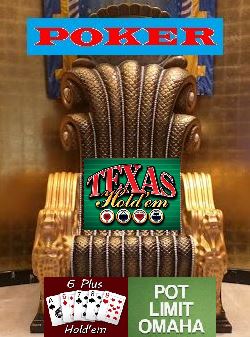 In terms of cash game action, however, games like PLO and Short Deck could become dominant forces. Offering more action, better chances of winning for recreational players, and just more action and entertainment in general, these contenders could definitely mount a challenge for poker’s the throne!