A fixture in Las Vegas for over 25 years, poolside gaming has finally made its way to the East Coast. Could the gaming expansion in the nation’s second-largest gambling hub mark the beginning of a new round of wars between Las Vegas and Atlantic City? 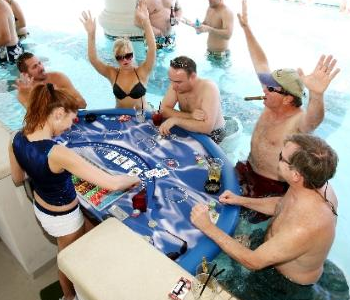 A novelty when the Tropicana introduced gaming tables by their swimming pool in Las Vegas almost 3 decades ago, the idea of spreading poolside table games has since taken hold at other Las Vegas properties over the years, including: the Palms, Hard Rock, Mandalay Bay, Red Rock, Golden Nugget, Caesars, Wynn, and the Flamingo. This past weekend, Harrah’s Atlantic City became the first casino on the East Coast to offer blackjack by the pool.

Poolside gaming’s popularity in Las Vegas is often attributed to the right weather conditions, namely dry heat. East Coast casino venues like Atlantic City have to contend with far more inclement weather like blizzards and hurricanes. Harrah’s Atlantic City has avoided the weather issue altogether with The Pool, its year-round domed swimming area, where the weather is always a balmy 82 degrees. 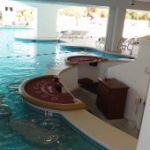 Already home to a thriving nightclub scene, The Pool at Harrah’s has installed a couple gaming tables with eventual plans to expand to a “full mini casino”. Harrah’s is owned by Caesars Entertainment, which has so far remained mum on whether it plans to introduce poolside gaming at its 3 other Atlantic City properties: Bally’s, Caesars, and Showboat.

Other Atlantic City casinos also seemed primed to begin offering gambling in heretofore non-gaming areas within their resort facilities. The Tropicana, for instance, intends to install slot machines and table games in its entertainment venue known as The Quarter.