At the beginning of 2018, Biles quit his job as a tennis coach in London to embark on what was intended to be a two-year journey across Asia. The original plan was for Biles, and his girlfriend Alice, to travel around Asia, play poker for a living, and hopefully return to London with as much (or more) money than he left with.

As the end of that original two-year stretch approaches, rather than have to go back to the drawing board and start learning from a guide to popular card games, Biles’ dream has evolved into something he could never have imagined. He started a poker and travel vlog, won the Vlogger in Paradise contest with said vlog, and won a Platinum Pass to the first ever $25k PokerStars Players Championship in the Bahamas as a result.

Since then, he’s also started working for PokerNews as an on-screen presenter, and also for high-stakes pro Charlie Carrel as the videographer of Carrel’s own traveling and poker vlog.

I got the chance to catch up with Biles, via Skype, just after he returned to his current “home base” of Bali, following a trip to the Philippines. 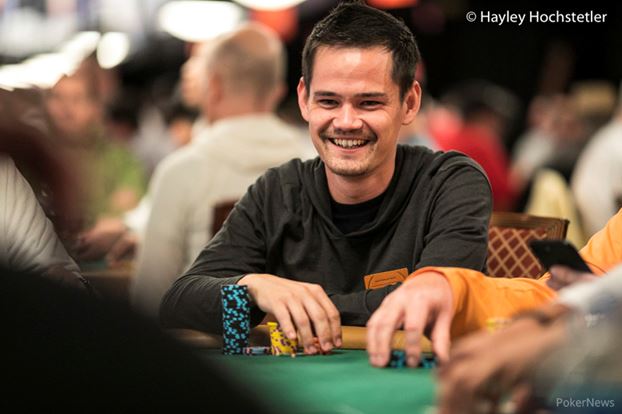 How is everything? How’s life?

Life is good. I’m back in Bali; did a month of traveling in the Philippines last month, which was awesome. I highly recommend going to see the Philippines whenever you get the chance. Now back in Bali, pretty much settling down here for the foreseeable future. We’re off to Vietnam for 10 days in a few weeks, then back to Bali for a month, then to Prague, doing EPT Prague, and then home for Christmas. So all is good, lots of things to do.

Did you play any poker on the Philippines trip?

I played a lot of poker in Manila, which was really good. It went well. I took second in a tournament with about 150 people, which is pretty cool. It’s the best I’ve run in a tournament in the last year and a half, but it was the lowest buy-in tournament I’ve ever played. So I didn’t win much, but it was nice to get a good run.

That’s usually how it goes, right? Those low buy-in tournaments are the ones you end up crushing.

How is poker going for you in general? I know you’re busy with all of these other things. Where is poker on the priority list right now?

That’s a good question. Charlie Carrel asked me the same thing when I was working for him, and that made me think of what I want to do going ahead with my life. When I first started traveling, the plan was to travel for two years, and pay for it from playing poker. The first year, last year, was the best poker year that I’ve had. I had a couple of deep runs at WSOP events, and made more than enough money for that year, and probably this year as well.

This year, didn’t go so well during the WSOP. I pretty much bricked everything; min cashed a couple of events. In terms of cash game trips, I went to Cambodia and it didn’t go so well. Manila went well, but that’s probably the only winning trip I’ve had this year. That said, it’s weird how my life has kind of changed, working for PokerNews and working in poker media, where I’m kind of combining two things that I really enjoy, being on camera and also working in the poker industry.

So I think going ahead, I want to focus my time on that. Getting better at being a presenter, getting better at editing and videography, and probably playing poker more recreationally.

How long have you been playing poker, and what got you into the game?

I started playing about 11 years ago, pretty much when I was 18. I went to drama school, training to be an actor, but I always wanted to go to university to study math. It was only my drama teachers at school that thought I should go to drama school. They actually offered to pay for all of my auditions and all of my transport to London, so they basically gave me a freeroll to go to drama school.

I didn’t know that being a professional actor was even an option to be honest. So I went to drama school, and basically left all of this mathematics behind. One of my friends at school asked me if I had ever played poker, and told me about the statistics and probability in it. I’ve always been a gamer. As a teenager I used to play Counterstrike and World of Warcraft a lot. So, I started playing poker, and I immediately felt that it was a game I could play where I could actually make money.

Let’s talk about starting the vlog; at that time you’re already traveling around, playing poker, living the dream. Then the Vlogger in Paradise contest happened; what made you decide to go ahead and enter the contest?

Me and Alice were going to start a vlog at the beginning of our travels. We bought a drone, and the plan was to get some cool drone shots and make a vlog. But it was only after the WSOP that I decided I’m really going to go for this. I’ll do this poker and travel vlog, give this kind of view of being a westerner trying to play poker in the east. The east is a very different place to play poker. The rules aren’t enforced the same way.

I remember being in Vietnam, and waking up one day and watching Andrew Neeme’s vlog. That was the vlog where he announced he was doing the Vlogger in Paradise contest, looking for the next poker vlogger. And I thought, this is the best way for me to start. Not even really knowing what I was doing; I didn’t even have a camera at this point.

Nearly a year ago I dared to dream and winning my #PlatinumPass through the #VloggerInParadise competition has really changed my life. Thank you @PokerStars for giving this opportunity to so many more! #DareToDream https://t.co/RjwW2jaeZG

I had made one video in my life, when I was 12 or 13 years old. I really had no experience. I downloaded some software and just started trying to put things together. I remember wanting to see what some of the competition was like, and I watched this guy Matt Kiefer, who ended up winning the other Platinum Pass. I remember thinking, “This guy is good. He’s a professional videographer, he’s really good on camera, and his first video was just super solid.”

And I remember thinking, “I’m going to have to do something different.” The first video I made was just a very traditional vlog. Then I got to thinking what kind of skills I could bring to the table that other people might not have? That’s where I kind of went off the rails a little bit, not doing the traditional thing.

Going into the inaugural PSPC, you had a lot of poker playing experience, but what were some of your emotions going into that event?

Funny story about that; when we arrived in the Bahamas our bags didn’t make it. We literally had no clothes, toiletries, or anything like that. It was coming to Day 1, and I actually met Garry Gates. He was the first PokerStars contact that we had.
He was the nicest guy; he ran around and got us a bunch of clothes and toiletries, to make sure we fit in comfortably. It was only Day 1! I got a text from Brandon, from PokerStars, and found out I was sitting at the feature table. This was obviously the biggest tournament I’ve ever played in my life.

I saw the lineup for my table, and it included Jason Somerville, Sam Greenwood, partypoker pro Joao Simao, and Eric Baldwin. There were just some insane crushers on this table.

Tell me about working with Charlie Carrel. I know you traveled with him to partypoker MILLIONS Europe in Rozvadov, as well as EPT Barcelona.

That started as a tweet from Charlie that he was looking for a video editor. I thought that I’d love to do that, but I also kind of doubted myself. I’d only been editing videos for nine months up to that point, but I just tweeted back with the emoji with the hand up.

Half an hour later, he direct messages me, saying “Hey man, I’ve seen your vlogs; would you like to come work with me?” So I started editing some videos for him.

Later we had a meeting, and he asked me if I any other cool ideas for videos that I could make. I suggested that he get a videographer and editor to follow him around to some of the high stakes tournaments? He liked the idea and asked me if I wanted the job.

It’s been great catching up with you, as always. Thanks Oliver!