Giving Some Love to the GPI/THM Podcast Network

In three out of the past four years, to maintain my fitness I’ve run 1,000km per year — an initiative that I also utilized to fundraise for charity. All of those hundreds of runs took place indoors, usually at night, on my treadmill at home. This year, after having done a little research, I’m trying a slightly different fitness regimen, namely outdoor walks during daylight hours. Specifically, sunlight is known to have a positive effect on a person’s mood. Moreover, runs tend to exhaust the body far more easily and require longer recovery time. So Instead of exercising 2-3 times per week for a total of three hours, I’m now exercising 5-6 days per week, for a total of 6-7 hours. All of that preamble is a lengthy way of saying that I have a LOT of time to “fill” each week… and what better way to fill it than by listening to poker podcasts?!

Specifically, I wanted to use this opportunity to give a massive shoutout to the GPI/THM (Global Poker Index/The Hendon Mob) Podcast Network. 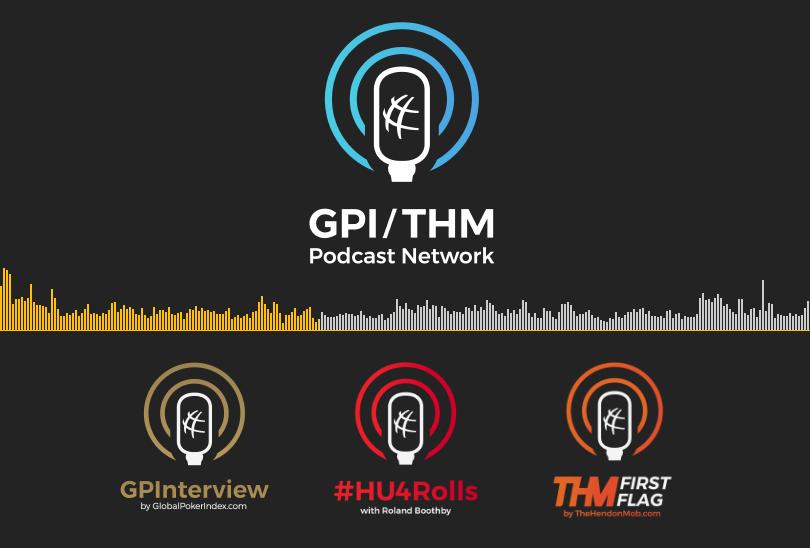 Their suite of four unique podcasts debuted back in November and thus far the GPI/THM crew — consisting of Eric Danis, Roland Boothby, and Anthony Charter, with the help of Wesley McKenzie and Hans Kleinsman — have produced close to 40 hours of new, very interesting poker podcast content. Particularly noteworthy is that within an already crowded poker podcast-sphere, the crew have come up with a variety of unique niches via which to create these new shows.

On “First Flag”, Eric takes his guests down memory lane as they reminisce back to the first time they ever cashed in poker tournaments. In 27 released episodes to date, we’ve gotten to hear from players like Jonathan Little, Greg Raymer, Phil Galfond, Phil Hellmuth, and so many more. With stories sometimes dating back decades, it’s fascinating to hear what it was like for all these now legends in poker to experience their first ever tournament cash.

On “Heads Up 4 Rolls”, Roland sits across some of poker’s perfect pairings for conversations that never fail to dig up interesting tidbits about the interviewees. Hearing from brothers like Jaime and Matt Staples, longtime broadcast partners Joe Stapleton and James Hartigan, and newly-engaged power couple Alex Foxen and Kristen Bicknell is nothing short of delightful, as we’re treated to special dynamics and rapport these dynamic duos have.

The GPI Interview is more of a “traditional” poker podcast, with Anthony taking an hour to better get to know some of the more well-regarded and respected personalities in the game who don’t always get the spotlight shone brightly on them. I’ve enjoyed listening to interviewees such as Brent Hanks, Matt Salsberg, David Tuchman, and Veronica Brill tell their stories of how they got into the game of poker, as well as learn more about their personal lives outside of the game.

Finally, “The Poker Show” has a little bit of everything, as the entire GPI/THM crew gets together to discuss the latest happenings in the live and online poker scenes, rankings shifts and surges among the most popular and successful poker players, share reflections on the latest episodes of the other three shows in the podcast family, and plenty of banter about all sorts of poker- and non-poker-related topics. For a true poker fan, it’s just awesome to feel included and like you “belong” while listening to this sort of casual discussion among self-described poker stats geeks who just love the game and the industry.

A Hugely Successful Pivot and Addition

Beyond keeping me company as I walk for miles and miles in the Samarian hills and producing dozens of hours of excellent poker audio content, the GPI/THM crew have accomplished something far more noteworthy with their slew of shows, namely a hugely successful pivot.

Live poker was all but decimated by the pandemic, as lockdowns, quarantines, and poker room closings sucked all the wind out of what had been a vibrant global scene. A direct casualty of that was that the GPI/THM crew essentially saw their workload and business evaporate into thin air. After all, with no live poker tournaments or events being held, there are no statistics to record, feats to document, or upcoming stops to spread the word about.

All of us in the poker world, the GPI/THM  team included, had to adjust to a new reality, and this proved more difficult for some than others, players, media, and industry personnel alike. It’s for that reason that what the GPI/THM crew brought to fruition is that much more remarkable and commendable. They managed to squeeze some excellent lemonade out of some very sour lemons.

Thankfully, live poker is coming back and it’s doing so in a massive way. Cash game tables are nearing capacity at open venues and the hunger for tournament poker is being catered to by long-dormant series that are mounting comebacks the world over. That means that, thankfully, the GPI/THM crew can now resume their “regularly scheduled programming”.

I can only hope that they continue producing their excellent suite of podcasts and somehow manage to balance both workloads, as — just like all the work they’ve always done — they’ve given so much to our poker community that we need to treasure and appreciate.