The Bellagio Hotel, Resort & Casino is synonymous with Las Vegas, the movie Oceans Eleven, and the Five Diamond World Poker Classic, one of the most iconic tournaments on the World Poker Tour. The 2022 edition of the festival will begin in less than 24 hours and will run through October 23 with a variety of events. The Main Event will kick off on October 19, and the final table will take place on Sunday October 23.

Twenty years ago the first World Poker Tour tournament was played at the Bellagio with 146 players. Among the finalists were Scotty Nguyen, John Juanda, Freddy Deeb, John Hennigan, and Gus Hansen, who ended up winning the event.

This year’s festival boasts the traditional $10K Main Event along with a number of other marquee side events — including a special cash game — which you can read about below.

You can see the complete schedule with all the events and satellites via this link. 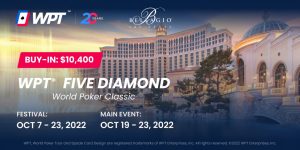 Following the success of the Meet Up Game (MUG) during WPT Australia, World Poker Tour ambassadors Andrew Neeme and Brad Owen will return to play $2/$5 cash games on Tuesday October 18 between 10 AM and 5 PM. WPT MUG players will be invited for complimentary drinks and food following the meet-up game, from 5 PM. 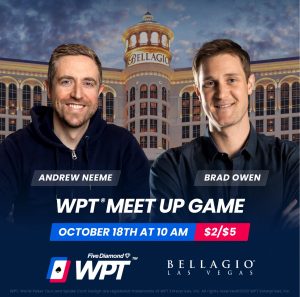 For the best available room rates at Bellagio, contact Bellagio’s Poker Host, Penny Cohen at [email protected] or by phone at 702-693-7290.

The last edition of the tournament was played in December 2021 and had 716 entries, distributing a total of $6,945,200 in prizes. The top 90 players made it into the money, and the champion crowned was Taylor Black, who took home $1,241,430 and got his name etched on the venerable Sexton Cup. 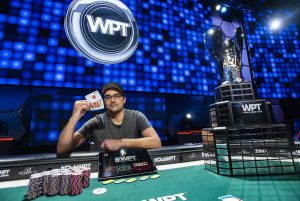 If you want to take a crack at adding your name to that illustrious list of WPT champions, then just head on over to the Bellagio!