Engineering Success at the Poker Tables

Life is funny sometimes. You never know which solitary encounter you have with someone can come back full circle, years later. Below is a poker story of precisely that happening. 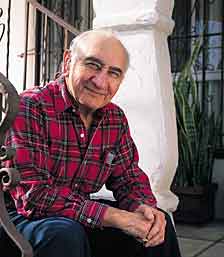 About three years ago, I briefly came into contact with a gentleman named George Epstein. I saw that he had written a column for Gaming Today about taking notes while playing poker, so I decided to ask if he would consider reviewing my (then-new) Poker Notes Live mobile app. He was kind enough to do so. I neglected to keep in touch with him after that.

Just about six months ago I started sending out a monthly newsletter. One of the responses I received to it was an encouraging email from George. I hadn’t even realized that I had kept his email address and that it was part of my mailing list; good thing it was! Since that time, we’ve developed quite the correspondence, during which I’ve learned a tremendous amount about him. Right off the bat I was blown away: George is almost 90 years old! He has led a rich and full life, boasting quite an accomplished career in the aerospace industry. That career earned him the nickname “the engineer” once he decided to get into poker upon retiring.

George didn’t just decide to play though. In fact, he’s made so many contributions to the game that it landed him in the Seniors Poker Hall of Fame. For over a decade he’s been teaching poker, introducing the game to several hundreds people at the Claude Pepper Senior Center in Los Angeles. Beyond writing for Gaming Today since 2011, George has also penned three poker books:

Out of the goodness of his heart, George decided to send me signed copies of the latter two books. That brings us back to the beginning of the story – now I finally get to repay the favor and write about George’s work.

Though it’s a short book, coming in at just 38 pages, Hold’em or Fold’em took me some time to get through. I’m more of a feel player when it comes to poker, so it’s just not the typical book I’d pick up in the first place. The math isn’t necessarily so complicated though; the book’s premise revolves around a relatively straightforward algorithm. Once you’ve mastered that concept, the rest of the book’s concepts, such as the Hold’em Caveat, starting hand criteria, game texture, etc. all fall into place rather easily.

Important to note, the focus of the book is on improving your play in limit hold’em only. That’s not to say NL Hold’em and PLO players won’t find it useful. Solid limit hold’em play is a fundamental building block for poker skill. Mastering the algorithm will help make your decision making easier and more automatic, which in turn will enable you to use your time at the table to work on other concepts, scouting tells, and making more advanced moves. 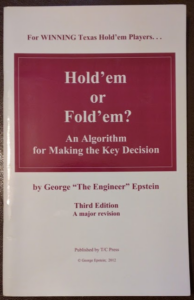 Also worth noting, George sent me the third version of the book (2012), with the original and revised versions having been published in 2004 and 2007, respectively. As per George’s own words, this third version “is substantially more extensive and introduces a number of new concepts, making it even more valuable to players who want to beat the rake. The Foreword lists the new concepts, and this edition also makes it even easier to use in the heat of battle.”

The Art of Bluffing

What I liked most about this 69-page book is that it takes on the concept of bluffing from what amounts to an academic perspective. Indeed, The Art of Bluffing basically amounts to a guide for the optimum times and situations in which to mount bluffs.

While absorbing the book’s content, I was transported back to my university days, as it felt like I was reading a published paper from an academic journal; and I mean that wholly as a compliment. Contributing to this were the book’s multiple appendices and addendums, and even a brief References section at the end.

Part of the beauty in this book is that it’s just as useful for beginners as it is for seasoned players. It tackles an exhaustive litany of situations you’re likely to find yourself in at the poker table, all the while accounting for position, hole cards, table image, opponents’ styles, and more. Hold’em is the only poker discipline discussed, but the concepts are easily applied to other forms of poker. 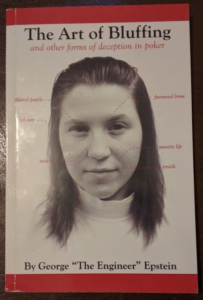 As a result of the above, perhaps ironically, The Art of Bluffing might more aptly be titled “The Science of Bluffing”, as it essentially provides you with a detailed instruction manual for how, when, and in which ways one can best pull off bluffs.

With the books costing $9.95 and $14.95 respectively, you’re all-but-guaranteed a ton of ROI should you choose to purchase them.

Indeed, the books themselves will help you engineer success at the poker table, but there was something else that struck me.

George dedicated both of these books to the nine “Lady Lucks” in his life, namely his grandmother, mother, mother-in-law, sister, and wife (all of whom have passed) as well as his ladyfriend, daughter, and two granddaughters.

In almost nine decades traversing the world, achieving all he has, George felt the need to dedicate his labors of love – these books – to the women who have made his life a happy one.

And THAT, by George, is how you engineer success away from the poker tables as well.