Would Daniel Negreanu Become Jewish for the Jokes?

Daniel Negreanu has long been the world’s most entertaining professional poker player. His dynamic and engaging personality, willingness to speak openly about any topic, and genuinely great sense of humor make him poker’s must-see attraction anywhere and everywhere he goes – including the virtual realm of online social networks. Recently, all three of these characteristics were on display over Twitter as Negreanu Tweeted his thoughts about a couple “Jewish topics”. What made the most impact on me though – in the form of fits of laughter – were his hilarious personal replies:

If I had a son I can’t imagine allowing a blade to chop off the skin on his penis. Seems so cruel and totally unnecessary!

@cardplayerlife for the Jews that walked 40 years in the desert without water I get it. Great recommendation. — Daniel Negreanu (@RealKidPoker) September 30, 2013

Just blew this girl away at the gym with a soul read- age 24, from Toronto, Jewish parents, grew up rich, theater actress. 5 for 5 #indazone — Daniel Negreanu (@RealKidPoker) October 3, 2013

@cardplayerlife can’t do it bro, Jesus was my favorite Jew 🙂

Fans of this poker blog may recall that I recently wrote a post about 9 Topics You Should Never Discuss at the Poker Table. Among these was the topic of religion, as in my opinion religion and poker “don’t mix”, but clearly Daniel Negreanu found a way to prove me wrong – with some great, witty humor and a smile.

Negreanu a Convert to Judaism? It Would Be Hilarious!

Definitely a poker player who can “bring the funny”, our recent Twitter convos made me wonder if Negreanu would ever consider becoming Jewish “for the jokes”. After all, hundreds of thousands have laughed along with Daniel as he’s done impressions of poker’s greatest players. Like many Jewish comedians, the man simply knows how to make people smile and laugh.

Daniel Negreanu actually shares something in common with legendary Seinfeld actor Jason Alexander – they’re both brand ambassadors for PokerStars. Perhaps, then, Jason might be willing to help Daniel along the path towards becoming an official “Member of the Tribe”. 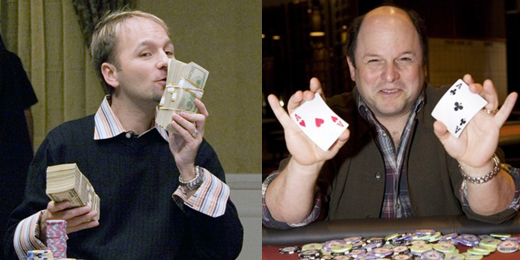 While Negreanu’s Tweets perhaps lessens the possibility of him joining the People of the Book anytime soon, one thing’s certain in that he’s got plenty of good Jewish buddies. Negreanu’s gone on the record many a time about his friendships with Israeli high school buddies Oren and Regev. Beyond that, most poker fans know that Negreanu has got a great longstanding relationship with Mike “the Mouth” Matusow as well as Barry Greenstein, Eli Elezra, and  – all 4 of whom are among the Top 10 Jews in Poker.Gabe Kaplan

Beyond these friendships, Negreanu has time and again displayed his passion for donating to good causes. This charity work is of course embodied in the Jewish value of “tzedakah“. In the past in these pages, we’ve chronicled Negreanu’s push to help the kids of St. Jude’s. Plus he’s done plenty of charity poker work with a number of great organizations like the Tiger Woods Foundation and Meir Panim.

But If It Ever Does Happen…

Betting on Daniel Negreanu to become Jewish for the jokes (or for any other reason) is a long shot, to be sure. Nonetheless, should it ever happen I could only hope that he joins my call to let my people go and play poker in Israel. And of course, I’d love to see him make a Lebowski-esque video rant of how he wouldn’t play poker on shabbos…

…plus he’s at least got a little rudimentary Hebrew going already: