A Comprehensive Guide to Chinese Poker

There are hundreds of sites all over the Internet that explain the rules of different types of Chinese Poker and give little tips and tricks that can turn you into a competent player of the game. In this post we’ll try to combine as many of these as possible into a comprehensive guide to playing Chinese Poker.

To play regular Chinese Poker, you’ll need a standard deck of 52 cards (without jokers). The maximum number of players is four. Each player receives 13 cards face down at the start of the hand. The cards are then split into three rows – the front/top, the middle, and the back/bottom. The front has three cards while the other two rows consist of five cards each. Hand strength in Chinese Poker is the same as in all other poker games. That said, the front only has three cards and trip Aces is the best possible hand for this row.

Open Face Chinese Poker is a more dynamic and skill-oriented variation of regular Chinese Poker. Open Face provides players with some information about their opponents’ holding (this feature is absent in the regular variation), giving more attentive players better chances at winning. 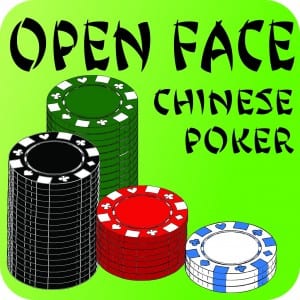 The main difference between Open Face Chinese Poker and regular Chinese Poker is that in the first round only 5 cards are dealt for each player, face down. The first player to the left of the dealer speaks first, turning his/her cards over and arranging them in the same three rows – the front, the middle and the back. Play goes on in a clockwise direction until all players have their cards arranged in three rows face up. In subsequent rounds each player receives one card at a time and adds it to one of the rows, as desired. Play then continues until all players have received 13 cards in total.


There is one critical thing to worry about when playing Open Face Chinese Poker and that’s fouling your hand. There is a simple rule that you have to observe when distributing cards into three rows: the bottom has to be stronger than the middle row, which, in turn, has to be stronger than the top. If this rule is broken, you have fouled your hand, which means that you will not get any points for your rows nor any extra points.

Open Face Chinese Poker (and all other variations of Chinese Poker) is played for units, unlike most other types of poker, which are normally played for chips. Units usually have monetary/chip value and the aim is, of course, to win as many units as possible. 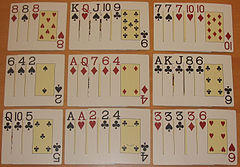 Basically, one row is worth one point. So if you beat all three of your opponents in the front row, you get one point from each player; that’s three units in total. If you manage to beat other players in all three rows, you get a scoop, and your units get doubled from three to six. But the game gets a little more complicated once royalties are factored into the picture.

On a very basic level, royalties are bonuses awarded for strong hands. The royalties differ depending on the row.

For the front row, royalties are awarded for all pairs from 66 to AA. Sixes give you one bonus unit, sevens equal two bonus units, eights mean you get three extra units, and so on. A pair of aces gets you nine extra units. Trips also give royalty units, while deuces give you 10 units, threes – 11 units; all the way up to aces awarding 22 points.

Player A receives one point for winning the front row with a pair of threes. There are no additional royalties for this player.

Player B wins the middle row with his flush against Player A’s straight.

Player A wins the back row, with full house against player B’s straight. One unit for winning the row plus 6 units for a full house minus 2 units player B gets for his royalty – 5 units for player A.

Fantasy Land is another rule unique to Open Face Chinese Poker. To enter Fantasy Land you need to have a hand that doesn’t foul, with the top row containing a pair of Queens or better. If you manage to finish your hand in Fantasy Land, you receive all 13 cards face down at once in the next deal, and you will be able to arrange your cards without revealing any information about them. To continue playing in Fantasy Land, you will need a stronger hand having the minimum of quads in the bottom row, full house in the middle row or trips in the front row. 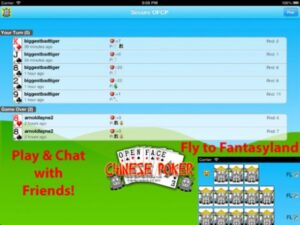 Other Variations of Chinese Poker

There are other variations of Open Face Chinese Poker. Pineapple Open Face Chinese Poker is one of the most popular types. The difference is that after the first round in which players get 5 cards each, they receive three cards at a time in every subsequent round. Out of these three cards, one has to be discarded without revealing the information about it to other players. Pineapple adds a new strategic element with the knowledge about discarded cards.

There are plenty of more detailed rule descriptions about the variations of Chinese poker, as well as instructional videos. If this blog post has piqued your curiosity, don’t hesitate to dive deeper into the game of Chinese Poker.

Hey, this is a great article thank you for explaining about Chinese poker; I really had no idea about it. Nice tips as well, I’m definitely going to try out open face chinese poker on cruelpoker.com and I’m going to keep your tips in mind while playing!