What Ever Happened to Open Face Chinese Poker?

Open Face Chinese Poker (OFC) dominated the high roller scene a few years ago. The early-mid 2010s featured countless stories of high rollers playing massive OFC games. The WSOP was a haven for these players, and in between bracelet events, there were often high-stakes OFC games running, usually in hotel rooms rather than casino poker rooms. With the game’s meteoric rise in popularity, it seemed as though this would become a staple in the high roller scene, and quite possibly the low-stakes crowd as well. Online card rooms began offering cheaper ways to play OFC and not have to worry about calculating all the points. Everything was in place to have this game cemented in the poker community. Then one day OFC just kind of disappeared. 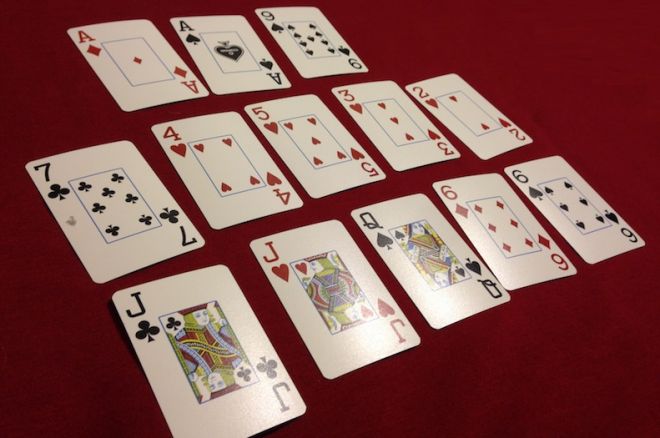 I’m not saying the game doesn’t still run. Of course it does. I’m sure you will still find high rollers willing to put up the big bucks to play some OFC, but the popularity and the stories just dried up. For a few years, at every WSOP there was buzz about the biggest OFC winners and losers. Media networks were making short videos about how to play the game, interviewing players, and sharing what was happening behind the scenes. For the past few years, however, it’s been almost impossible to find an interview or social media post about some degenerate OFC session.

So… what happened? Could it be that players just started looking for other thrills playing casino games at Vera & John and other sites? Possible, but that’s of course not the most likely reason. It appears to me two specific things happened that have caused the OFC light to fade away.

First, a new game came onto the scene in Short Deck Hold ‘Em. Short deck appears to have been born out of the Macau nosebleed games, with the likes of Tom Dwan and Paul Phua leading the charge. Short deck is simply NLH with the 2s through 5s removed. Also in Short Deck, a flush beats a full house. In this game, you are more likely to hit a full house, so a flopped set is great and straight draws come more often, so 10Js is a lot prettier in this game than in regular NLH. Much like OFC, the high roller scene grasped onto the new game. Massive short deck games started being streamed from the Triton High Roller scene, and the poker community latched on.

Short Deck was newer than Open Face Chinese Poker, so naturally, people gravitated towards the new game. Also, the barrier to entry is much lower. There are no new rules to learn, as it plays just like NLH, except that most of the time it is an ante game with 1 blind instead of the typical 2 blind structure. But other than the ante difference and the full house and flush ranking switch, nothing else needed to be learned. Anyone who had ever played NLH could jump right into a Short Deck game, which attracted more fish than did OFC. With nobody needed to calculate the points, the game was easy to get going. As we all know from Rounders, the fish attract the sharks. With the relative ease of Short Deck, it is no wonder that OFC enthusiasm died down.

The Rise of Mixed Games

Another factor is the rise in mixed game popularity. Mixed games tend to draw high-stakes players who are tired of the grind of NLH or PLO. Big bet flop games are much more accessible to the masses, but the higher stakes players are more likely to prefer other poker variants where the equities run closer. Also, some newer games are making it into the mix such as the Badugi variants, Drawmaha, and Super Stud. By mixing up the traditional H.O.R.S.E rotation, more players moved into the mixed game scene and away from OFC. These large mixed games are running constantly in Vegas and Los Angeles, creating some stiff competition for OFC.

The above made me come across another question: why do high-stakes players look for new games?

It’s no surprise you have to be a great card player to make it to the nosebleeds. Even the non-professional poker playing businessmen are incredibly smart, as it is not easy to have a bank account big enough to play with five figures (or more) for fun. So these players do not have a large edge against one another, and when a true whale does sit down, the other players at the table are just competing to go against them. This doesn’t make for a very lucrative environment, as the poker knowledge is vast when it comes to NLH.

New games and mixed games offer an escape from these largely solved games. New games don’t have solvers, and it takes the best minds to quickly pick up on winning strategies. The mixed games have so many different variants that it is near impossible to be an expert in each, so there is a wider range of strategy and knowledge across players. Also, the newer games like OFC and Short Deck all share a commonality of closer equity.

For example, AA vs TJs preflop is 80/20 in NLH, where it is 66/33 in Short Deck. This is a huge equity shift, so players are incentivized to play more hands. Having wider ranges preflop is ALWAYS beneficial to the pros, so they will continue to seek out games with closer equity. This, of course, leads to greater variance, but in the long run, the crushers of the game will adapt and find winning strategies that their opponents do not have. Essentially, the less study information and knowledge are available for a game, the more advantage a good card player is going to have. Of course, the high roller pros are pushing new games.

This is how @IamDonCheadle does me on the river in Open Face Chinese Poker. #Case6 #FoulYouVeryMuch pic.twitter.com/O2JOjyb0cS

While Open Face Chinese Poker is not a dead game, it is clear why its popularity has died down. As new games are invented, we will see more popularity swings, and the high rollers will be constantly finding new games to gain an edge in. This is great news to me as a mixed game player. I love seeing new poker variants come onto the scene. When OFC was at its height, I was playing anytime I found other low-stakes players to play. I have done the same with Short Deck, and I will do the same with the next great game that comes along.