How Does Open-Face Chinese Poker Differ from Hold’em?

Over the last decade or so there have been a number of poker variants to “hit the mainstream” in the hopes of capturing peoples’ hearts and becoming “the next big thing”, but (arguably) none of them, not even Omaha, have risen to prominence as speedily as Open-Face Chinese Poker (OFCP), which many players are labeling “the thinking man’s game”.

You can also play Open-Face Chinese Poker via a dedicated app. on your mobile device

If you haven’t yet encountered Open-Face Chinese Poker but are wondering what you’re missing, here’s a quick run through of the rules.

The basics of Open-Face Chinese Poker are actually very similar to those of traditional poker. The goal is to create three poker hands; one three-card hand on the top row and two five-card hands on the middle and bottom rows, respectively. Each player is dealt five cards to start with, which they can arrange on the top, middle or bottom row. To avoid fouling the hand, players must make sure their best hand is placed along the bottom row; the middle row must contain the next best hand; and the top three cards should represent their worst hand. All traditional poker ranking rules apply to each hand.

Now that you understand how to play OFCP, we’ll get into how it differs from Texas Hold’em.

Texas Hold’em: You need to create the best possible hand from the two cards you’re dealt, and the five community cards on the table.

Open-Face Chinese Poker: You need to create three separate hands that add up to the greatest possible points score from the 13 cards you’re dealt. As stated above, the best hand must be placed in the bottom row, the second-best hand in the middle row, and the worst (three-card) hand in the top row. The cards can be set in any combination across the three hands, and once they’re set they cannot be moved.

Open-Face Chinese Poker: The first five cards are dealt, which must be placed in any combination, face-up, in three rows. After that, players take turns drawing eight cards from the pack. They must set each card in place across one of their three hands after it is drawn. No bets are placed between rounds. Instead, the game is scored in points once the hand is complete.

Texas Hold’em: Hands are ranked in the traditional way, from a royal flush all the way down to a high card.

Open-Face Chinese Poker: The three hands are scored and ranked just like regular poker hands. The bottom and middle rows are regular five-card hands. The top row only contains three cards; as such, the best possible hand on top would be three-of-a-kind.

Open-Face Chinese Poker: Scoring is where OFCP differs from all other poker variants, as it’s done via a points system. Players score points for each hand that wins against the opponent’s corresponding hand. If a player wins all three hands they receive an extra bonus. Points can also receive royalties, which are awarded when certain hands are achieved in certain positions. These are then added to the score. A player who has fouled (i.e., the top or middle hand scores more than the hand underneath it) scores no points for any hand, but “pays” six points for the foul, plus points for any royalties the opponent may have. 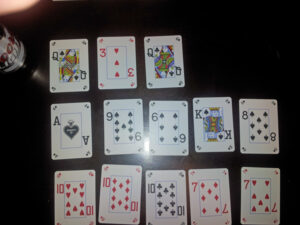 Open-Face Chinese Poker: Something else unique to OFCP is “Fantasy Land”, which is a special set of rules that applies if a player plays queens or better in their top hand without fouling. If they do, in the next hand they are dealt all 13 cards at once, and their cards will not be exposed until the other players have completed their hands.

Texas Hold’em: Bluffing adds some unpredictability to the game and allows players to win pots they statistically should not. Knowing when it’s appropriate to bluff and how to ensure that bluffs work is an integral skill for winning players.

Open-Face Chinese Poker: Unlike almost all other poker variants, there is no bluffing in OFCP. While some argue that this mitigates the skill factor in OFCP, other content that OFCP requires more skill because of the number of decisions players must make.

So, there you have it. Now that we’ve touched upon the main differences between Texas Hold’em and Open-Face Chinese Poker, the only question that remains is whether or not you’re ready to give OFCP a try for the first time.

Article very interesting and instructive try and see what happens. take the challenge