That’s more or less (probably closer to less – pretty sure I replied somewhat more professionally, but with equal excitement), how the conversation went when Robbie asked me if I could go in his stead to Seminole Hard Rock in Hollywood to cover the WPT Rock ‘N’ Roll Poker Open for Cardplayer Lifestyle.

So yeah, I’m Florida-bound and I’m pumped to be representing this site at the penultimate stop of what’s been an incredible 20th season of the World Poker Tour. I was recently fortunate enough to also be at Bellagio in Las Vegas for the Five Diamond World Poker Classic, where I had the chance to meet and work with some of their outstanding team at another of their premier events.

Those fine folks and a guaranteed to-be exciting main event are just a couple of reasons why it’ll be amazing to be in beautiful Hollywood, Florida in a few days, but I thought I’d share a handful more reasons why I’m stoked to be heading to the WPT Rock ‘N’ Roll Poker Open.

The WPT Player of the Year Race

The POY race is always an exciting element of a World Poker Tour Season, but this year has really been something. Darren Elias, Chance Kornuth, Robert Mizrachi, and Chad Eveslage are just a few of the names that have been in the POY mix this season, but at the top right now, is the eccentric, boisterous, cigar-chomping, old-school, East Coast legend that is Steven ‘Cuz’ Buckner. 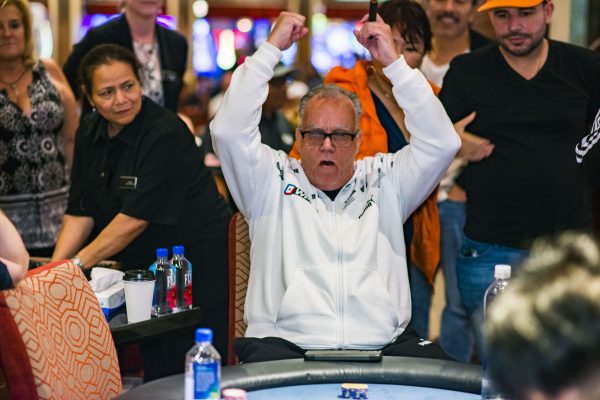 While you may not have heard of ‘Cuz’, if you’ve ever met or been in his near vicinity in a poker room, you’ll know why I call him a legend. He’s Cuz. You’re Cuz. Everybody is Cuz! I’m pretty sure he only knows the actual name of maybe 10% of the people he’s ever met because he lovingly addresses everyone as ‘Cuz’, and asks to be addressed himself as ‘Cuz’.

And he, and everyone else are just fine with it. Cuz’, well, ‘Cuz’!

Buckner, er, ‘Cuz’s road to the lead in the POY race is pretty remarkable. He earned his position on the backs of a pair of runner-up finishes (to Kornuth at WPT Choctaw, and to Eveslage at Five Diamond), only losing these events to soul-crushing river cards that delivered bad beats to Buckner both times when he had the tournament in his grasp with his opponent all in heads-up in potentially tournament-clinching pots.

Buckner is a retired business owner who only took up poker full-time following the passing of his mother, whom he cared for in her final months. Since going on tour after his mother’s passing, Buckner has earned well over $1 million in under 18 months. Plus, as mentioned, he has the WPT POY lead, which could have been even bigger than its current 450-point margin had those river cards fallen differently.

The Coral Springs, Florida resident will be on home turf as he tries to hold or extend his lead, with Ray Qartomy, whom he passed for the lead at Five Diamond, Eveslage, and several others hot on his heels.

I can’t wait to be there to see how this chapter of the race plays out, with whoever wins the Rock ‘N’ Roll Poker Open Main Event Title added to that race before the season concludes at the WPT World Championship at Wynn Las Vegas in December.

While I’ve been fortunate to play poker in many cool places in my travels as a live reporter, from tiny two-table setups on a sawdust-covered floor in the back of a bar in Deadwood, South Dakota, to an exclusive-feeling club in Prague, Czech Republic with chandeliers over every table; Florida is one place I have yet to hit the felt, and I can’t wait!

From the stories I’ve heard about the great action everywhere in the sunshine state and being told by many players how outstanding the Seminole Hard Rock Hollywood is for poker on every level, from the staff, to room quality, to action, this is a stop I’ve been relishing for a while.

And now I’m actually getting paid to go!

“Play a couple sessions, write about the room and your experience there,” Robbie told me as we were discussing ideas for what I’ll write about while there.

But yeah, he didn’t have to tell me twice to go play at this amazing property and see for myself what the hype about poker in Florida is about.

The Seminole Hard Rock Hollywood Property and the Guitar Hotel

I mean just look at this big, beautiful piece of epic architecture towering over this incredible-looking property!

Again, I repeat, I am being paid to go here! 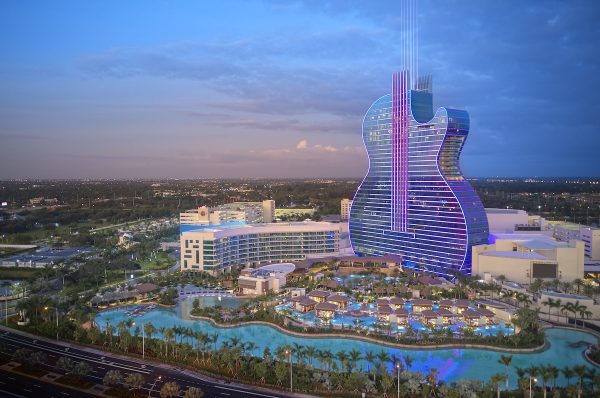 A recent reporting trip sent me to the Hard Rock Hotel and Casino in Tulsa, Oklahoma, and my experience there left me with even greater excitement to visit its sister property in Hollywood, Florida. The rock and roll-themed décor and memorabilia around every corner was very cool to see (and the bedside chocolate guitars that were so tasty that my good friend Hayley Hochstetler actually bought every damn one of them from the hotel gift shop), has me excited to check out what’s on tap at this property. 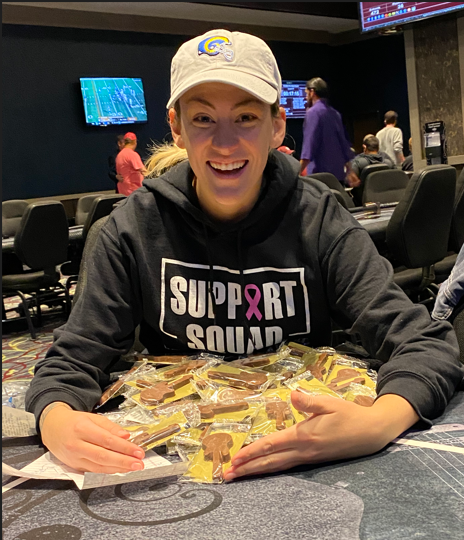 Now as for that giant-ass guitar…

Full disclosure, I don’t actually know if I’ll be staying in it, but I’m pretty hopeful. Fingers crossed!

Having been on the road and seeing hotel rooms of all shapes, sizes, and smells (yup, there was one of those), I’ve garnered a kind of dorky appreciation of the unique when it comes to a hotel room. Sure, there have been plenty of nice rooms I’ve stayed in, but those with a little something different make that stay just a bit more memorable, and I’ve never stayed in a giant friggin’ guitar!!!

Florida Weather (But Not Just the Sunshine)

I live in Toronto, Ontario, Canada, which is a pretty cool city, but it is Canada, so at this time of year, it’s literally becoming a pretty cool city. As in freezing cold. As in, it snowed for the first time this week, as you can see in the pic below.

Yup, time to get the hell out. Hmm, Florida seems nice. 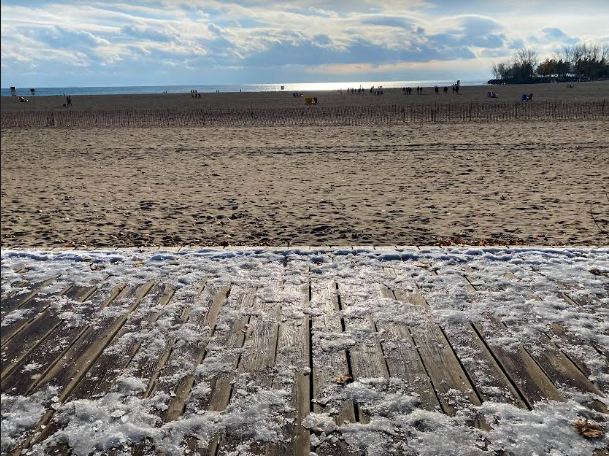 This will be my first time in Florida since I was there over 10 years ago for a vacation, and of all the great fun that was had and the sumptuous dinners that were eaten, one enduring memory stands out from that trip:

A run in the rain on a 90+ degree Fahrenheit day.

Sure, I’m obviously looking forward to enjoying sunshine, heat, and some time hanging out by that beautiful pool at the base of the guitar hotel (working of course on articles *wink*), but yeah, I kind of want to feel some Florida rain, too, while I’m there.

Who knew weather could feel nostalgic? It’s in the forecast, so I’m gonna find out.

Last but certainly not least, if there’s one thing I’ve enjoyed above all else globetrotting around the poker scene, it’s the great people I’ve met on my travels who I’m fortunate enough to call friends.

Players, fellow media, and even non-poker friends I’ve met along the way give me even more to look forward to on any given stop I’m sent to. 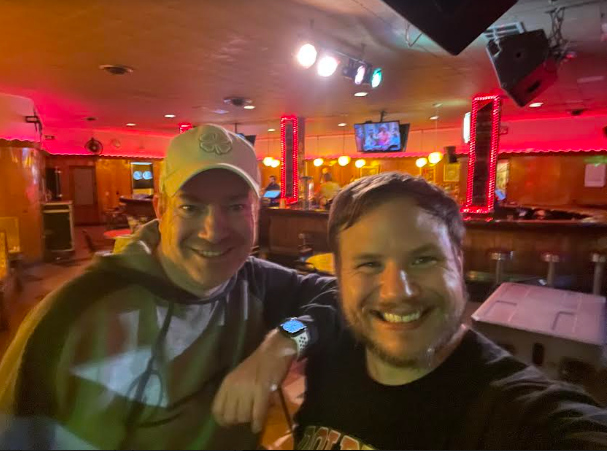 I’d always heard that life on the road can be kind of lonely, and for the first bit before I knew many people, I could see it. But while I still don’t consider myself a veteran in the world of poker media, each stop I meet more and more cool people, with some becoming friends that I can look forward to catching up with down the road.

Seeing where you’re going next and knowing that there will be friendly faces there with smiles, handshakes and hugs make each stop better than the next. I was reminded of this recently in Cleveland, as I got to discover a great couple of bars with Chad Holloway, pictured above.

I’ll be looking forward to discovering some Hollywood / Fort Lauderdale area restaurants and bars, maybe checking out a Panthers and/or Dolphins game, and enjoying those experiences with some very cool people.

Oh yeah, and I’m going to write a few articles while I’m there, too. 🙂