I had plenty of reasons to be excited heading into 2019, a big one being that I’d be kicking off the year with a bang and heading to the Bahamas to cover the inaugural Poker Players Championship. It represented what would become my second trip to Paradise Island, my first one having been back in 2016. In the run-up to the trip, I wrote about some of the things I was looking forward to, and even with all the hype and build up I must say that the event exceeded expectations.

Throughout my five-and-a-half days of coverage, I was sure to have my camera at the ready so as to try and capture some of the best moments. The result of that is the vlog that you can watch below and that will hopefully illustrate to you from my perspective what it was like to have so many amazing experiences while on-site. Special thanks and a shout out go to Mike Burgher, who worked tirelessly behind the scenes in Los Angeles to put the vlog together, as well as for his assistance with editing all the other video interviews I conducted over the course of the trip.

Just below the embedded vlog, you’ll also find some additional Tweets and descriptions that help tell the story of my time covering the 2019 PSPC.

Flight in 10 hours… One might say that I’m excited… Will be tough to sleep tonight 😀 https://t.co/wHIxtYTwHX

That feeling when you personally know about 30% of the players in a 800+-strong $25k field #PSPC pic.twitter.com/rHsoj8l6o8

The PSPC ended up boasting a field of 1,000+ players, a truly astounding turnout for a $25,000 buy-in event, making it the largest-ever such field by far, even after accounting for the 320 Platinum Pass winners. And speaking of Platinum Pass winners, I bumped into a couple of them at the same time. Pictured below are Kevin Mathers and Asif Warris.

A writer, an oracle and a tourist walked into a bar… pic.twitter.com/wGduBTOuvG

Beyond the PSPC-specific festivities, I also got my hands on the just-published Eli Elezra autobiography, which I translated from Hebrew into English, for the first time; it was a very cool and fulfilling moment. We also decided to stage a small book signing on-site.

A first sighting of the new Eli Elezra book, translated by this fine gentleman. A project of @elielezra1 @cardplayerlife and @twoplustwoforum pic.twitter.com/0oOK5FYQUA

I had mentioned in my PSPC preview post that one of the things I was looking forward to was walking into the ballroom full of Platinum Pass winners. The vibe of Day 1 was truly electric and it inspired me to write the post referenced in the Tweet below.

NEW: The vibe of Day 1 of the #PSPC is practically indescribable.

Well, I took a crack at it in this #oped and tried to capture what I believe is the universal sentiment here at the @atlantisbahamas among both rec and reg players alike.

Over the next couple days, I had the opportunity to conduct some of my most memorable interviews ever, with notable celebrities and sporting legends.

NEW VIDEO: I had the pleasure of interviewing legendary stand-up comedian @normmacdonald here at the #PSPC.

Admittedly, my inner fanboy made a bit of an appearance… what can I say? Norm’s even funnier in person! 😃

WATCH: During my conversation w/ skateboarding legend @tonyhawk at the #PSPC, he shared what he loved most about the game of poker, described the great work done by his @THF in low-income areas worldwide, and spoke about what he’d like his legacy to be. https://t.co/PIA6AR3Dxl

NEW: It’s not every day that you get the chance to interview @paulpierce34 not once, but twice.

If you’re interested in learning how Paul instantly became my new favorite NBA player – and why he’s a total class act and gentleman – please read/watch this.https://t.co/Z2TZgqBEIu

So cool to have had the opportunity to interview @UFC ring announcer extraordinaire @brucebuffer.

We spoke about what he loves most about poker, his favorite poker variants, what deep tournament runs mean to him, and more. 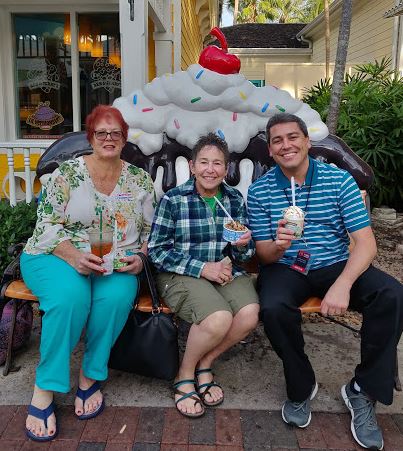 Based on all the pictures and the highlight video, one might think that being at the PSPC was “all fun and games.” To be sure, I certainly enjoyed my downtime, but there’s also a lot of work that went into producing my coverage, some of which is still yet to be released in podcast form as of this post’s publication. On one night (morning?) I was even the last one in the media room…

In case anyone was curious what 5 a.m. looks like at the #PSPC 😀#wholovesitmore pic.twitter.com/oDgM0mNdcY

…which is what happens when you suddenly find out that the following day you’ll be interviewing PokerStars’ new Marketing Director at 11pm and you’re scrambling to do research and put together questions. We ended up speaking for an entire hour!

ICYMI, at the tail end of my #PSPC trip I had the opportunity to interview @erichollreiser, Marketing Director at @PokerStars.

We went long on this, but IMHO it’s worth your time. Lots of openness and honesty in here.

Sitting here alone in my living room on a quiet hilltop reflecting on my “week in paradise,” it’s such contrast to the constantly buzzing ballroom and hallways packed with poker players. All in all, it’s a trip I’ll never forget and I’m glad to have had the opportunity to experience it.

Since arriving to the #PSPC at 10:15am on Sunday, I’ve slept for a total of approximately 14 hours.

Ride back to airport leaves in 5 hours. I’m finally “out of battery,” but feeling great that I squeezed every possible ounce of energy into this trip.