Lost in all of the hullabaloo of Michael Mizrachi making the final table of this year’s WSOP Main Event, with a chance to tie for Player of the Year honors, was the man who was already guaranteed to at least be the co-winner, Frank Kassela. 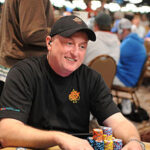 The winner of 2 championship bracelets at this year’s World Series, Kassela also finished 3rd in a $25,000 event AND also cashed in the Main Event. A virtual lock to win Player of the Year, Kassela has had to wait 4 long months to officially be crowned, as, mathematically, Michael “the Grinder” Mizrachi still had a shot at tying him at 290 Player of the Year points, were he to win the WSOP Main Event. As far-fetched as it had sounded, Grinder made a memorable run, but was eventually halted in 5th place, finishing with 240 points.

As indicated by his overwhelming lead in the Player of the Year race, the 42-year-old Kassela by far had the best summer of any poker player, with his performances earning him approximately $1.3 million.

For his efforts and successes throughout the World Series, Kassela will join the ranks of Daniel Negreanu, Jeffrey Lisandro, Erick Lindgren, Allen Cunningham, and other great poker luminaries, who also won Player of the Year honors in years past.

Kassela will also get his face permanently enshrined on one of the banners that hang above the Rio poker room during each year’s World Series of Poker, as well as receive a personalized $25,000 gift from Harrah’s, which runs the WSOP.

Perhaps this marks the beginning of an extended run of success for Kassela? Will his name eventually be uttered in the same sentence as poker legends like Phil Ivey, Doyle Brunson, Stu Ungar, and others? Only time will tell, but for now – congratulations, Mr. Kassela, on your phenomenal poker achievement.