Jake Ferro has just been crowned the World Poker Tour Season XIX Player of the Year. The 32-year-old from Syracuse, New York, truly had a banner year, with the overwhelming majority of his $1.244 million in career tournament earnings ($1.050 million to be exact) coming in 2021. While he could undoubtedly be said to have had a breakout year, Jake’s is a name that perhaps doesn’t yet ring a bell for poker fans unless you follow the Florida poker scene closely.

To better familiarize ourselves with the player behind those phenomenal results and achievements at the felt, we reached out to Jake with some questions.

Without a doubt, Jake remains primed for further success, and we’re positive that before long he stands a great chance of becoming a true household name in the poker world. 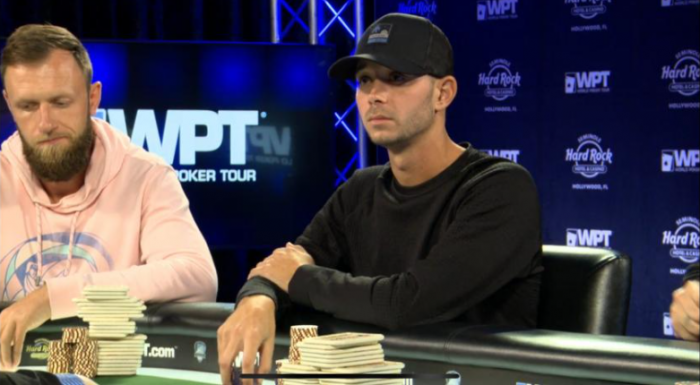 You’ve recorded a total of 72 tournament results dating all the way back to December 2008, but close to half of them came in 2021. Did you make some sort of New Year’s resolution to play in a LOT more tournaments at the end of 2020, or were you simply the beneficiary of a lot more rungood than usual?

I moved down to Florida in November 2020 after quitting my job in Syracuse to concentrate on poker. So I started playing nearly every day and really refined my tournament game. I’ve never been a regular at the higher buy-in events during different poker series, but I built my bankroll up enough to where I could start playing them. And it’s been going pretty well, lol!

Among your 35 cashes in 2021, you had three six-figure scores, for $120K, $184K, and $573K, respectively. Plus, you also notched an $80K score when you finished 14th at the recent WPT Five Diamond event at the Bellagio. Prior to that, your best score was for about $25,000 back in July 2019, when you finished in 555th place in the WSOP Main Event. How does it feel to have “made it to the next level” and be recording results that are so much larger than you’ve ever experienced before?

I’m still on cloud 9 honestly. I have always trusted my game and “trusted the process,” if you will, but to finally be seeing these results is pretty cool.

It seems like your bread and butter up until recently had been three-figure entry tournaments, and you’ve run deep in lots of them, enabling you to recently begin taking shots at the 4-figure buy-in level. What’s your bankroll management strategy, generally speaking? How did you know when it “felt right” to move up?

Playing all the lower buy-in tournaments is exactly what I needed to get my game to where it needed to be. Watching how people play and figuring out what kind of player is capable of making a move and vice versa. Studying players was key to this run of mine. As far as bankroll management, it’s never been my strong suit. I’m just your average guy who has moved up in stakes and has found success playing against the best players.

How did you first get into poker? What about the game first enchanted you that you still enjoy and appreciate to this day?

I first started playing poker with my neighbor and his Dad. I’ve always been super competitive in everything I do, and I loved that aspect of the game. To outthink and outplay someone at the table is a great feeling

To what degree did moving from Syracuse to Florida affect your play, besides the rooms you frequented? Do you see that move as somewhat of a turning point in your career?

Since I moved down in 2020, the games have been unreal in Florida. As most of the country sat idle during the pandemic, Florida was rocking. And if you wanted to play poker, Florida was the place to be. The move was definitely a turning point for me as you just can’t really find daily tournaments up in New York.

People don’t tend to luckbox their way to consistently excellent results in poker. How do you actively work on your game? What sort of study process and tools do you implement to improve away from the felt?

My studying of the game is basically just talking to a few close friends of mine (who are stud players) every day about the game. I’ve always said the best way to get better is constantly talking with great players and to just throw yourself into the fire and hit the felt. I also watch most poker tournaments that are streamed and of course keep track of what the best players in the world are doing.

What does the World Poker Tour Player of the Year accolade mean to you? In particular, does it hold any added significance to you to join the ranks of legends like Daniel Negreanu, Anthony Zinno, Jonathan Little, and others who’ve all previously been WPT Players of the Year?

In my opinion, the World Poker Tour is the best tournament series out there! From the dealers/staff to the schedule of events, they continue to put on an unbelievable poker stop wherever it may be. So for me to be the Player of the Year for 2021, it means a lot. My name amongst some of those legends… just, WOW!

Achieving this magnitude of success means fellow players tend to sit up and tend to take notice, especially as you mostly frequent rooms in the same region. Have you perceived that some players have perhaps begun to play slightly differently against you now? Do you find yourself having to make more adjustments to your game than you used to?

I am currently playing in the WPT Lucky Hearts Poker Open in Hollywood, FL and I haven’t noticed any difference in the play against me in the preliminary events. Florida players are relentless, haha. Maybe we will see a difference in the main event in a couple days…

The WPT has long excelled at lavishing extra attention and spoils on their champions. Hand in hand with your Player of the Year title, you get a WPT Passport worth $15,000 which you can use at any WPT Season XX event. Plus, you get the VIP treatment with complementary accommodations and ground transportations at all WPT Main Tour events you attend this season. To what degree did “all the extras” motivate you as the end of Season XIX approached?

As you probably know, the added expenses that come along with every stop present a big challenge for us poker players, even though we’re perfectly willing to fire multiple thousands of dollars at a single poker tournament. So, as funny as it might seem, the room accommodations have me more hyped than the $15,000 in buy-ins! I also did not even know I was in the running for player of the year until I won it. All the added spoils were a really nice cherry on top for sure.

In particular, you seem pretty excited to go to the planned WPT stop in Australia. Can you tell us some more about that and what that upcoming trip will mean to you?

Since watching Animal Planet at a young age, Australia has always intrigued me. Whether it be their wildlife or beautiful scenery, it has been on my bucket list for places to travel to in my life. Now, I finally have a concrete reason to go there and a few friends who will be joining me, so I’m beyond excited!

Steve Irwin made me want to go to Australia since a very young age, looks like that time has finally come for me. Soooo hyped!!!! https://t.co/IG92kLvc0x