The World Poker Tour’s historic 20th season kicks off in a huge way in just a few days, with the Lucky Hearts Poker Open (LHPO) at the Seminole Hard Rock Hotel & Casino in Hollywood, Florida.

The popular Seminole Hard Rock venue always attracts huge turnouts for the WPT, and this year’s LHPO will be no exception, with a $2M guaranteed Main Event headlining the 33-event schedule that begins on January 13th. 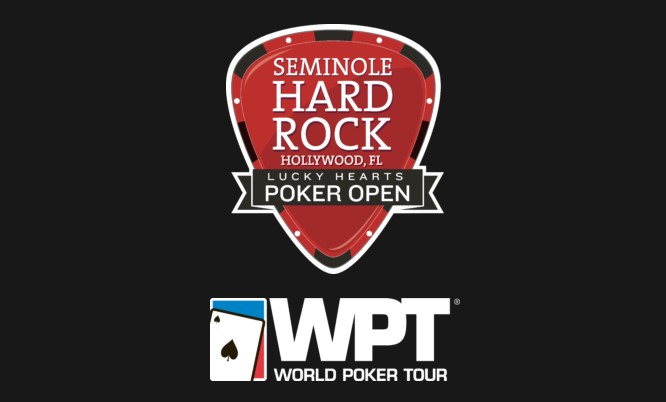 With the expected huge turnout, what else can be expected is that that $2M guarantee will be shattered, much like other recent WPT events here. Last year’s LHPO smashed its guarantee, building an over $5M prize pool before Ilyas Muradi of Fort Wayne, Indiana took down the top prize of $809,515 by besting the massive field of 1,573 entries.

This year’s $3,500 buy-in LHPO Main Event begins January 21st with two starting flights, and optional re-entries until level 9 on each day. The tournament will run for five days, with the final table streamed on a 30-minute delay Wednesday, January 26th on WPT.com.

More Than Just the Main!

Along with the Main Event, the two-week-long Lucky Hearts Poker Open schedule has something for players of all bankrolls, with events ranging from a $150 buy-in No-Limit event with a $20,000 guarantee to the $25,500 No-Limit High Roller with a $1M guarantee.

The series begins January 13th with the first of six opening flights of a $600 buy-in 2-day Deep Stack No-Limit event with a $1M guarantee.

There’s plenty on the schedule for Pot-Limit Omaha and mixed game players as well, with multiple events including PLO 8, Limit Omaha 8, Big O, HORSE, and Omaha 8 / Stud 8 on the schedule, with buy-ins ranging from $400 to $2,200.

The full event schedule can be found here.

We mentioned Ilyas Muradi’s victory in the 2021 LHPO Main Event to claim the $809,515 first prize and have his name immortalized on the Mike Sexton Cup, but what we didn’t yet mention is that Muradi won his seat in a $400 satellite!

Satellites will be running throughout the series not just for the Main Event, but for several other events as well, beginning Tuesday, January 11th.

Satellite details are also available on the event schedule link provided above.

More History to be Made at Seminole Hard Rock Hollywood

The Lucky Hearts Poker Open has a rich history with the WPT, with main tour and WPT Deepstacks series events dating back to the inaugural event in 2012, and we’re pretty certain that its 11th year here in 2022 will be the biggest one yet!

Will another satellite winner pull off the improbable? Will two-time LHPO champion Brian Altman win the event for an unprecedented third time? Will WPT end boss Darren Elias add to his record four WPT titles? Or will it be someone new making history?

For more details about this tournament series, visit WPT.com and seminolehardrockpokeropen.com.