Thanks so much for taking the time to chat with us, Joe. Let’s dive right into it…

On the ESPN WSOP Main Event broadcast, you were asked what it would mean to win the bracelet and almost $7.7 million. You responded that “the money is so important; that’s why we play the game; I’m doing this to support myself…The prestige of being a world champion would be so much greater than I could imagine.” It’s been about a month since you’ve won. Now that you’re living it, can you better describe the prestige of being the World Champion?

While holding the title of “Poker World Champion” is a prestigious honor, I’m finding that in my regular life not a great deal has changed other than doing way more interviews and signing autographs. At the end of the day, I’m just a young guy that loves the game of poker and won a huge tournament. 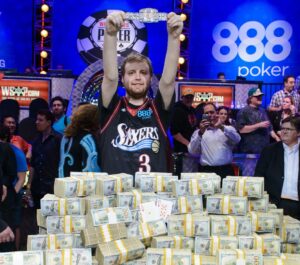 Now that you’ve got a few million in the bank, I’m wondering how your answer to ESPN’s question would change, since you no longer HAVE to play poker to support yourself. In other words, besides winning money, what is it that you enjoy most about playing poker?

In all honesty, I truly enjoy playing the game of poker. I like the challenge it presents each time and I know that I will definitely continue to play poker.

You’ve accomplished the one thing in poker that every player dreams of. What else are you hoping to accomplish during your poker career?

A poker player would be lying if they didn’t say winning as much as possible was key. My goal every day is to play my best and to make the right decisions. Staying humble is also important to me, I don’t want my head to get too large while I’m playing. I find that it causes me to make suboptimal decisions.

Do you envision yourself doing more travel to play in High Roller poker events around the world?

I played in the Alpha 8 at Bellagio and a couple of $25Ks at Aria and one in Seminole back in August. I enjoyed it immensely and would love to play a few more of them throughout next year. I have interest in playing the ones at PCA.

What are your poker plans for the near future?

Outside of the PCA, I don’t have too many plans. I don’t have an interest in leaving the US (outside of PCA) so I likely won’t be going to Europe or Macau.

You and I chatted briefly on Twitter after we recently published an op-ed from Jennifer Newell indicating that you were one of the top people worth considering for an online poker sponsorship in Pennsylvania (once it’s licensed and regulated there). Your response was:

With that said, would you nonetheless be interested in pursuing sponsorship deals with online poker operators (or other companies)? Why or why not?

888 poker sponsors me and I enjoy working with them a lot. I wouldn’t drop 888 for a Pennsylvania poker sponsorship. Having said that, 888 has a platform in place if online poker ever gets legalized, so I would happily represent them there if they had interest in that.

In some of the interviews you’ve given since winning the Main Event, you’ve spoken about winning the Risk World Championship back in 2010. In what ways would you say poker and Risk are similar/different?

Both are strategy games that involve a lot of patience and luck.

Besides Risk and poker, what other strategy games do you enjoy playing and why?

I like Hearthstone. It’s another puzzle to solve that’s different in every game. 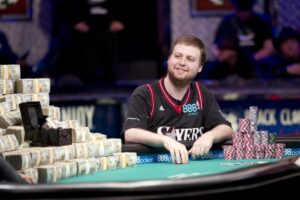 Do you have any charitable (or other) causes that you support which you’d like to lend your newfound fame to so as to help advance them and/or increase awareness?

Not at this time, but possibly in the future.

After your big win, you went from relative unknown to “the newest face of poker”, which obviously changed your life. So many poker players and fans out there aspire to achieve that type of success. For those fortunate enough to get that one big score, what are the best pieces of advice you would give them, now that you’ve gone through it yourself?

Keep practicing and working hard and good things will happen.

Thanks so much again for your time, Joe. Wishing you much success in the future, both at and away from the poker tables.