When The Wife is Away, The Husband Will Play (Poker)

Since I took the leap to become self-employed in poker media almost two years ago, I’ve been fortunate to do quite a bit of traveling. Visitors to this website have seen the articles, interviews, and videos I have produced from places like Barcelona, Las Vegas, Malta, Los Angeles, Bucharest, and the Bahamas. What you don’t see is that, behind the scenes, there’s a very special woman enabling all of it to happen, namely my wife, Miriam. Each time I jet off to another poker event, Miriam holds down the proverbial fort, single-handedly caring for our three kids and juggling the full weight of those parental responsibilities along with her professional work. When I’m not abroad I work from home, which enables me to spend plenty of time with the kids and fulfill my fair share of the household responsibilities, so things balance out quite well.

Anyhow, what’s far rarer – in fact, it’s only happened once since we got married 16.5 years ago – is Miriam taking a solo trip. Earlier this month during one of our conversations (yup, we still talk to each other after all these years together 🙂 ), the idea of her flying to New York popped up. Her aunt and uncle live there as does a very good childhood friend of hers, and Miriam just sort of wondered out loud: “Should I go visit? I kind of want to.” My “YES!” couldn’t have been more enthusiastic.

No, I wasn’t secretly nursing a burning desire to boot her out of the house. Rather, we’re thankfully now in a situation where one of us being away from home for a short time doesn’t make things too logistically difficult on the other. Neither of us have to commute to an office, and our kids (aged 11, 9, and 6) are incredibly well-behaved and pretty self-sufficient. It all makes temporarily single-parenting – dare I say? – relatively easy. Miriam has expressed similar sentiments over these past couple of years when I’m abroad.

In any event, within hours of the idea escaping Miriam’s lips, her ticket was booked, and she was all set to fly out a few days later for a much-deserved week-long vacation. 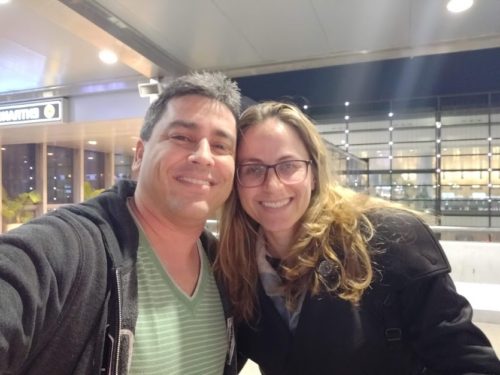 Dropping Miriam off at the airport. I’m sure she knew I’d be playing a lot of poker while she was away, but there’s no way she could’ve guessed just how much!

Naturally, my load got heavier while Miriam was away, so it was of course more challenging than usual to get my work done while also ensuring things ran smoothly in the house. Prepping breakfasts, lunches, and dinners each day, food shopping, kitchen cleanup, and doing laundry all take time. So does ferrying all the kids around to their various extracurricular activities, appointments, and helping them with homework, as well as coaxing them through the morning wake-up and evening shower/bedtime routines.

To be sure, I’m not complaining about any of the above. In fact, I genuinely enjoyed the de facto promotion from Vice President to President during the week 🙂 and was happy to dedicate extra time to my kids. They’re only young once, after all. With all that said, it obviously just takes more effort and commitment each day when you’re not splitting the load with a partner.

As far as my workload was concerned, I took my foot off the gas just a bit, and just forced myself to use “non-Daddy hours” more efficiently, handing off much of the writing workload to Cardplayer Lifestyle’s contributors, and getting podcasting, editing, replying to emails, and my other responsibilities taken care of as best I could.

And so were all my home game buddies!

My wife is away in New York until Wednesday. This was the scene in my house last night.

Hopefully the first of MANY home games while she’s out of town! 😀#alsowonmoney #Goodtimes #singledadlife pic.twitter.com/8XjvqFwY31

We don’t have casinos or poker rooms here in Israel, which leaves home games to pick up the slack and give me my fix at the felt. I usually get to play about once a week on average, with the session lasting anywhere from 3.5-6 hours. I imagine that’s something a typical recreational home game player can identify with, right? Of course I’d love to be able to play more, but balance, responsibilities, blah blah, etc.

But the wife was away… so it was time for the husband to play!

Thanks to blessed nighttime routines (I LOVE their energy but, Lord be praised, their batteries run out like clockwork at the stroke of 8pm each evening 🙂 ), my kids got safely tucked into bed and then “Daddy time” began in earnest.

I had put all my local buddies on notice that casa del Robbie would open for business any night we’d be able to get enough players together. I also wanted to be sure to play in my Dad’s home game (about 30 minutes away from where I live) whenever it would run.

How long is my wife abroad for again? 😂#dadsgame pic.twitter.com/CWl0OLlNvg

It’s rare that I get to prioritize my poker play, so I certainly tried to make the most of my “week off.” My (natural Jewish) guilt about “staying up too late” took a hike and I was more than happy to “play until whenever” during each friendly gathering around a poker table. When it was all said and done, I managed to squeeze in 17 hours of home game poker in over three sessions. That’s about the equivalent of what I normally get to play in a month.

To be sure, I often worked for an hour or two after each of the three home games I played in, which meant my friends and colleagues in the U.S. were often surprised to get emails from me during their evening hours 🙂 .

Rather than a proper sleep, I ended up taking something more akin to a short nap before getting up to start the mornings with the kids. Once they were out the door – yeah, you guessed it – back to bed for another short nap… Ah, the joys of self-employment! Might as well take advantage once in a while, right?

All good things come to an end, and of course the aforementioned schedule isn’t something sustainable in the long term. I’m grateful for my regular routine and work-life balance… but damn that week that Miriam was away was invigorating, challenging, and – thanks to great friends at the felt – a hell of a lot of fun. It certainly doesn’t hurt either than I managed to come out a winner in all three sessions. 🙂

I think we might need to make Miriam’s New York trips an annual thing, eh?