What Lies Beyond the Poker Room?

The moment my ticket to attend PokerStars’ EPT Barcelona was booked, I began preparing in earnest. I was heading there to work, of course, so I started devising my content plan. I drafted questions for a couple of Team PokerStars pros I interviewed as well as outlines of a couple other planned articles. I also made sure to be prepared on the food front, as sticking to a strictly kosher diet always requires advanced preparation. While there were plenty of things I was looking forward to, especially as I had never been to Barcelona before, the one thing I didn’t actually make a plan for was the city itself; i.e., being a tourist.

Landing at the El Prat airport on Thursday morning, it took a good day and a half before I finally took a moment to “catch my breath,” as it were. Grateful for the forced break my Sabbath provides, I sat in my hotel room Friday night having finished evening prayers and ready to enjoy my dinner, but I still struggled to mentally “disconnect” from my media work. After a few minutes of processing the previous couple days’ activities (and enjoying some delicious potato kugel 🙂 ), it dawned on me that I hadn’t really seen or experienced anything outside of the hotel or Casino Barcelona complex, nor had I even made plans to. Not wanting to report back to my friends and family at home that the most interesting things I saw in Barcelona were poker tables and slot machines, I made up my mind right then and there to set out the following morning to explore the city.

I woke up Saturday morning quite excited. It’s rare for me to be spontaneous and go into a day without some sort of a plan, much less a day as a tourist in a foreign country. The hotel concierge was kind enough to give me a schematic map of the city and point me in the right direction towards its main sites and attractions. It being the Sabbath, I couldn’t take my smartphone with me and couldn’t avail myself of motorized transport. While some may consider that to be restrictive, I actually felt very liberated. Hoofing it and not feeling any sort of pressure to capture scenes in perfect frame for others meant I could fully experience the city in the best, most enjoyable possible way. 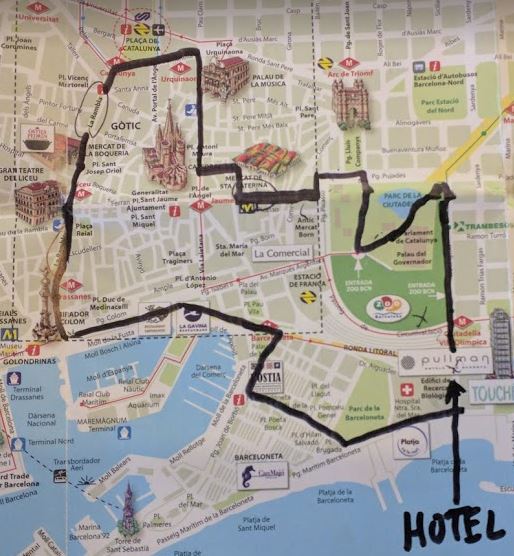 The route I traversed across Barcelona’s city center

The Sights and Sounds of Barcelona

In our age of social media, the mantra of “pix or it didn’t happen” has almost become sacrosanct. As mentioned, however, I was without my smartphone, so you’ll just have to trust my descriptions on this one. I had done absolutely no research on Barcelona whatsoever, so I got to enjoy the thrill of just being surprised by whatever unexpected vistas greeted me around each and every turn.

My walk began across the street from the hotel at the Parc de la Ciutadela. Surrounded by lush greenery, it was wonderful to see so many fellow tourists as well as locals out and about enjoying a bit of nature. Many of them were camped out in small groups around the man-made lake, while others were standing in awe looking at the giant white water fountain capped by a golden statue of four horses.

Exiting the park, I saw Barcelona’s version of the Arc de Triomf in the distance, but decided to turn left and head further west. The bold black line I traced on the schematic map above might make it appear as though it was a straightforward circuit route, but I assure you that navigation wasn’t that simple. Numerous narrow side streets and passageways (and a startling lack of good signage) made it a bit tough to stick to the path I wanted to follow, but each little detour was charming in its own unique way.

The beautiful multicolored roof of Mercat de Santa Caterina beckoned, so I entered the premises to find all manner of trinkets, treasures, fruits, fowl, and fish being mongered. Smells galore complemented the raucous atmosphere, which stood in stark contrast to the air conditioned, spotless aesthetic beauty of the marketplace itself.

From there, I was about to continue walking towards Catedral de Barcelona, but something else grabbed my attention. Three street performers had decided to “set up shop” just outside a cafe. I ambled over to watch their acrobatic feats, all being executed to a great Latin beat to onlookers’ clapping delight. After the show, I continued past the stunning cathedral towards Plaça de Catalunya, where an elderly man enchanted me (and numerous others) as he sang beautifully along to a popular Spanish folk song being performed by a couple of musicians on guitar and keyboard.

From there is was on to Las Ramblas, the city’s famed main pedestrian thoroughfare.

The full tourist presence was on display as thousands of people thronged the boulevard, patronizing all manner of stores, kiosks, restaurants, and the like. Clearly, the locals absolutely worship their La Liga soccer squad (ya, I know, “fútbol” – whatever) and its superstar, Lionel Messi, as his “official” uniform was being hawked by nearly every single vendor.

Walking down towards the sea, I detoured to Mercat da la Boqueria, which was essentially like Mercat de Santa Caterina but about twice as large and being patronized with about five times as many people. It, too, was beautiful, but it certainly wasn’t spotless and very much did not feature air conditioning. Let’s just say that on a hot, humid summer day, the fragrances emanating from the meats, cheeses, and spices were highly magnified.

At the bottom of Las Ramblas, the deep blue Mediterranean Sea signaled that it was time to complete my circuit route and head back towards my hotel. The gorgeous boardwalk was littered with holiday-goers, many of whom were on bikes and roller blades, as well as with vendors of the less-than-legal variety trying to sell their merchandise.

Rather than continue along the most direct route back to my hotel, I decided on the spur of the moment to pass through the Barceloneta neighborhood so as to get a bit more of an authentic feel for what life is like for those who live in the city. At the edge of a small park I saw a big, encircled basketball court, where three guys were shooting hoops. It had been ages since I had played basketball…

Over the next half hour, I teamed with Fareed (French-Lebanese) against Kevin (Chinese-American) and Jerry (Filipino). Fareed and Kevin were a couple of 30-year-olds studying towards their MBAs, while Jerry was a 22-year-old who had been living in Barcelona for the previous eight years. I certainly felt all of my 36 years of age, having to call it quits after just one intense, but friendly game until 11. The four of us sat around for another 15 minutes thereafter just talking about life and enjoying each other’s company, until I excused myself to head back to my hotel for a much-needed shower. It’s those types of spontaneous, fun experiences that no tour guide or motorized vehicle could ever expose you to. Those couple minutes walking back to the hotel all tired and sweaty thinking about how I had spent my morning and afternoon were some of the most enjoyable I’ve had in a really long time.

Altogether, my sojourn took me a little over four hours to complete. Google is your friend, and I’m sure you can find pictures of each and every place and site I described above with a little searching. Pictures may be worth 1,000 words each, but no matter how good they are, they just can’t capture what’s so special about experiencing things in person and allowing those experiences to just sink in and affect you.

As per this article’s title, this is the rare piece of content that doesn’t really have anything to do with poker. Sitting in my hotel room that Friday night, I realized that I spend so much time and energy focusing on the “Cardplayer” that I sometimes forget about the “Lifestyle” part. The same can perhaps be said for poker players. Part of the beauty that living a Cardplayer Lifestyle is that it affords poker players unbridled freedom. While it’s of course still very challenging to make a living playing poker professionally, not being shackled with the typical 9-to-5 office grind is an incredible blessing that should not be taken for granted.

So much poker content out there focuses on strategy and improving one’s poker game. So many players are out there grinding so hard, trying to win as much as they can and to get and maintain an edge over their opponents. Let’s just all remember to come up for air and take little breaks from poker once in a while. The game can afford someone the opportunity to travel all over the world, but it would be quite unfortunate to only know all those different locales by the way things appear from inside the casino walls.

Get out there and see what lies beyond the poker room.