It’s good to know that low-stakes cash game grinders can still score big once in a while. Since debuting their “Total Bad Beat Jackpot” in late August of 2010, the combined monies given away by Harrah’s Atlantic City, Caesars Atlantic City, Bally’s Atlantic City, and the Showboat has reached almost $5 million. This past Thursday, the Total Bad Beat Jackpot hit for a 20th time, awarding $93,313 to the loser of a Texas Hold’em hand holding quad 4s and $62,565 to the winner of the hand, who was holding quad 8s. While the hand itself was played at Caesars, every poker player sitting in the 4 aforementioned Atlantic City poker rooms received $1,068. 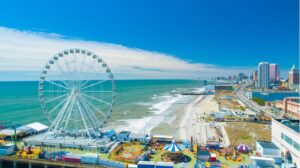 The progressive jackpot meter read $307,482 when the Total Bad Beat Jackpot was finally hit. On average, it has been hit just over once a month since it debuted about 1.5 years ago. In accordance with the rules of the special pooled bad beat jackpot, after the winner and loser of the hand got paid, the remaining 50% of the prize pool was split among the other 140+ players lucky enough to be seated at an eligible Atlantic City poker table at 3:45 am. The Total Bad Beat Jackpot was immediately reset to $100,000 with 4 queens as the qualifying hand to be beaten. From my own unlucky experience of just missing a bad beat payout, in all likelihood the 4 poker rooms all but emptied out after everyone was paid their winnings.