Tilt is one of every poker player’s worst enemies. No matter how good you are, no matter how much you know about the game, it all goes out the window when tilt kicks in. The moment emotions take over, you’ll stop making rational decisions and playing in this state can be devastating for your bankroll.

No one is immune to tilt. Things will happen while you play poker that will throw you off. However, good players are fully aware of this and they have mechanisms in place to either prevent tilt from happening or quickly control it to minimize its harmful effects. If you have problems controlling tilt yourself, these 10 tips could come in really handy. 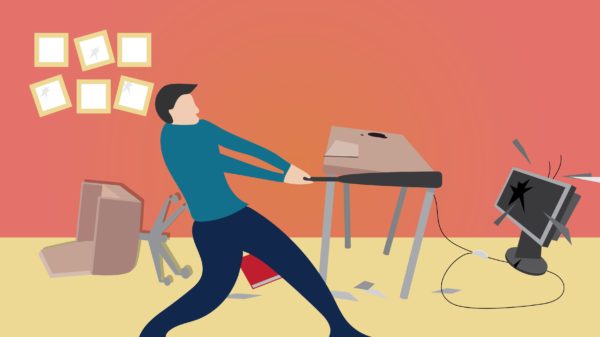 Not everyone tilts for same reasons. Some people are triggered by bad beats, while others will become annoyed by a prolonged run of bad, unplayable hands. Still others will tilt when they feel they’re being targeted by an aggressive player.

The first step towards making sure you don’t tilt at the poker table is figuring out what your personal triggers are. Be honest with yourself and admit there are some things that get under your skin. When you know what triggers you, you’ll be prepared for whatever emotions might come your way ahead of time and will be able to handle them much better.

2. Don’t Start a Session When Tired or Irritated

If you play poker professionally, you might feel like you need to put in the hours no matter what. After all, your profit at the end of a week, a month, and a year is directly connected to the number of hands you play during that period of time.

However, sometimes you’re better off sitting one out. If you’re in a bad state of mind due to not having enough rest the previous night or because you’re dealing with a big non-poker related issue, you probably shouldn’t be playing. When you feel this way, you’ll be much more susceptible to tilt. Things that trigger you in general will become annoying much more quickly and you might even discover some brand new sources of tilt.

Cash game players have the luxury of being able to take short breaks without it mattering too much. You’ll miss a few hands but, unlike in tournaments, you won’t lose any of your chips. Taking breaks every couple of hours to get some fresh air and sort out your thoughts is another great way to stop tilt from taking over. Tournament players have breaks built in to the schedule, of course, so be sure to make proper use of those times.

It is sometimes hard to be fully focused while you’re sitting at the table, watching cards and chips flying around and the opponent who put a bad beat on you stacking the chips. A brief change of scenery, even if only for a few minutes, will give you a different perspective of things. If you’re playing online on a site like dewapoker, you can simply sit out for a couple of orbits and come back when ready.

The number one reason why poker exists is the variance. It’s because of it that even casual players win on occasion and these wins keep them coming back to the tables. If best players won all the time, amateurs would quickly get tired of the game.

All players need to accept and embrace variance. Don’t get tilted because someone is running hot during a session. Whenever you start to feel these negative emotions, make it a point to tell yourself that these bad beats are actually a good thing in the long run. They are what makes game going.

5. Avoid Complaining Too Much

Bad beat stories and constant complaining aren’t just annoying for other players to listen to; they’re also very bad for your mental state. Poker tilt can sometimes last long after a session end and you’re only prolonging this tilted state by insisting on recounting your bad luck.

It’s fine to share some really brutal beats with your friends, but if that’s all you do you’re setting yourself up to start the next session already tilted by those previous experiences. That’s really not a starting position you want to be in.

6. Don’t Get Goaded by Table Banter

Some players are really good at table talk. Even if they don’t play poker that well, they have a way of getting under your skin and getting you to make mistakes you’d never make if you were playing with a clear head.

You don’t have any way to silence these players – they’re allowed to talk and do their thing as long as they aren’t being abusive or insulting. So, the best thing you can do if you know this to be one of your triggers is to avoid getting into conversation with them. Just ignore them and don’t give their remarks any significance.

7. Don’t Play Above Your Limits

Getting into a higher-stakes game or a tournament with a buy-in that’s bigger than what you usually play can be quite tempting. If things go right, you could easily increase your bankroll by a substantial amount. However, this is usually not a very good idea for a number of reasons. One of them is that you’ll struggle to play your best game.

All your tilt triggers will be much more pronounced when you’re playing in a setting where you don’t feel as comfortable. Every bad beat will hurt more, and every bad decision you make will have a more profound effect on your mental state. If you want to avoid tilt, you definitely don’t want to be playing over your head.

8. Try to Not Overstay Your Welcome

Not all forms of tilt happen all at once. Sometimes, when you play long sessions, there will be dozens of small things along the way that slowly get under your skin. Eventually, it might start to affect your game.

This type of tilt is quite dangerous, as you might not even notice it. There isn’t a particular point in time that you can recognize as the trigger. That’s why it’s important to constantly be aware of how you’re playing, your mental state, and be honest with yourself. If you notice you’re starting to make decisions that you can’t really explain, it’s time to call it a day.

Going on a hot run of cards is one of the best feelings in poker. You get to rake in pot after pot and it seems like you just can’t lose a hand. Your big hands hold up, your bluffs go through, and it seems like the entire universe has aligned just perfectly.

The problem is, this can give you the false feeling of invincibility. Eventually, your hot run will end and if you aren’t careful, you might continue to play recklessly, thinking it’s your day and you just can’t lose. This is known as winner’s tilt and can be just as dangerous as any other form.

10. Have a Personal Checklist in Place

It’s not always easy to recognize tilt. That’s why you should have some sort of checklist in place so that you can go through the items on the list to see if you’re still playing with your head, not your heart. You can memorize this list or even have it on your phone as a written reminder that you need to keep a cool head.

Some of the things to monitor every now and again are:

The important thing here is to stay honest with yourself. If you notice there are few items on your list that aren’t the way they should be, it’s a pretty good sign you might be tilting. Take a breather and see if you can get back in the zone. Alternatively, consider ending the session right then and there. Anything is better than just continuing as is when you know tilt is creeping up.