Anyone who has ever played live poker in a casino has probably seen players requesting seat changes. Have you ever wondered why? The Cardplayer Lifestyle poker blog has a few ideas. 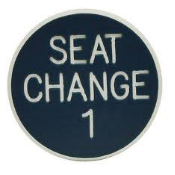 1. A seat opens up at a different, really juicy table

The name of the game in poker is making money. If you see a seat open at a table where you know you can have an edge and make more money, then you belong in that seat! The longer you stay put, the more you’re losing out in potential winnings.

2. Your current table features a really tough lineup of players

This is the opposite of reason 1. If you feel like you’re constantly being outplayed, aren’t winning much money with your big hands and essentially nothing’s really working for you, find a better seat at a better table and start over.

3. To get better position on certain players at your current table

You always want to have aggressive players on your right and passive players on your left. Even the playing styles of top name pros like Daniel Negreanu and Antonio Esfandiari are hampered somewhat when they have unpredictable, aggressive players acting after them. The concept of position is so important that just sitting in the “correct” seat at your exact same table may make all the difference between a winning and losing session of cash game poker.

4. To refresh your image

The game you’re currently seated at might not necessarily be tough, but a bad run of cards or a cold deck may have, for example, inadvertently cast you as a tight player when you’d rather play while having a looser image. A seat change to a fresh table of new faces can change all that in the blink of an eye.

Picture this: You just sucked out on two other players to win a huge pot. Now, as the biggest stack at the table, you’re labeled as a donk. Guess what? You now have a major target on your back from players with ramped up aggression! Don’t give your opponents a “chance to get even with you”. Take the money and run … to the nearest open seat at a new table. 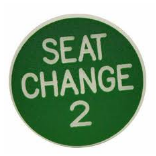 6. You’re simply not having a good time

As much as we all play poker to make money, there’s also the enjoyment factor. If you’ve been grinding away for a couple hours with a bunch of silent, hoodie and sunglasses-wearing college dropouts, while the table next to yours has been yucking it up telling jokes, shouting over big pots, and rooting on sports teams on the plasma screens, see if there’s a seat open for you. Also, chances are that you’ll play better poker when you’re enjoying yourself more.

Texas Hold’em is a game that requires lots of patience, so if you’re not participating in many hands, you might find yourself staring at the walls. If you’ve been sitting in the same seat all afternoon and are simply bored to death, why not try a different poker discipline like Omaha or 7-Card Stud Hi/Low?  Variety is the spice of life! Once in a while it can be refreshing to shake things up a little.

8. The Sherriff’s back in town

A new player sits down at the table that you recognize you’ve played with before. Very quickly, you recall that he ruled the table and took plenty of your money last time you were seated together. You might be coasting along just fine, but if someone comes along who you’ve got marked as a pro or who knows your game inside out, warning bells should go off in your head. Head for the hills (or in this case, the nearest open seat at a new cash game poker table)!

9. Improve your field of vision

As much as possible, it’s important to be able to see all of your opponents at the poker table. A new seat with a better view might give you a better picture of what’s happening at the felt. This reason for requesting a seat change is particularly relevant if you’re in seat 1 or seat 10, right next to the dealer.

To play your best poker, you need to be in the right frame of mind. If your table is full of obnoxious, smelly, intoxicated, or otherwise unpleasant players to be around, you’re all but guaranteed to at the very least be off you’re A-game. There’s no shame in asking to be moved to a more “sterile” seat or table.

Just remember, whatever your reason for changing seats, don’t make it obvious to the players around you, especially if you’re just switching to a different seat at the same table. The last thing you want your opponents to do is get personally offended or catch on immediately and adjust. If you happen to be asked by another player why you’re moving, just say something like “to get a better view of the cocktail waitresses” :-). It works every time…

Trivia”””Who came up with the numbered seat change buttons?

I imagine it was someone well-known… Gimme two guesses – Linda Johnson or Mike Sexton maybe?

No, do Google it. I’d be floored if they really had my name in there.

looks like you’ve stumped Google and Wikipedia… lots of stuff “circling the runway” but no names given 🙂 Pleasure to meet you (insert name)! 🙂

In any event, feel free to email me [email protected] with “the story behind the invention”, etc. Maybe we’ll do a future piece/interview about it… and of course you’re invited to share this article via your social channels…