Poker Tips by George: The Beauty of Slow Play

Deception is a vital part of the game of Texas Hold ‘Em. If you rarely try to deceive your opponents, you are hardly ever a winner. Bluffing and semi-bluffing are the deceptive strategies most often used. But, hard to believe, there are recreational and novice players who insist they will “never” bluff. Other deceptive strategies include slow play, trapping, sandbagging, and check-raising.

Upon flopping a monster while playing at a site recommended by gokken online ideal, our Hero, a skilled player, decides to use a check-raise to build the pot he expects to win. After Hero’s check on the flop, an opponent open bets. A few others call his raise. Hero then makes his raise, completing his check-raise. Most of those who had called the opening bet will also call our Hero’s raise. The pot is growing, just as he hoped. 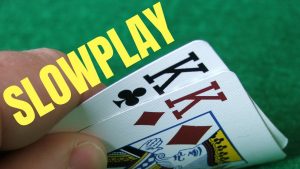 Trapping with a big hand is another slow play tactic to build “your” pot. Just check or call a previous bet – no raising. You are planting the seed to get an opponent to do the betting/raising for you. I regard sandbagging as an alternative term for trapping. This works best against loose-aggressive opponents.

Next to bluffing and semi-bluffing, my favorite form of deception is the slow-play. Using it is an art. I’ll explain…

There are two ways to become the big winner at a hold ’em table: 1) hold the best hand at showdown and 2) build the size of the pot.

Hold the best hand at showdown

With eight opponents at a full table, the odds are much against you to hold the best hand by showdown. The more opponents staying to see the flop, the less likely you will survive. Hoping to catch the nuts, raising before and after the flop can help you to thin the field. When all the other players fold their hands before the river, they forfeit the hand to you. Winning small pots is okay – but your real goal is to win as many chips as possible.

Build the size of the pot

Forcing out opponents does not help you to build the pot size. Your best strategy when you catch a monster hand or have a powerful draw is to build the pot. Case in point, You flop four-to-an-Ace-Queen high flush. That gives you nine solid outs plus two overcards – 15 outs in all. The pot odds give you a healthy positive expectancy (+PE).

There is another tactic you might use to build “your” pot. The Esther Bluff serves to reinforce your semi-bluff. Playing limit hold ’em, the size of your bets is severely limited. That’s where the no-limit player has a big advantage: He can raise as much as he wants to make it awfully expensive to call his semi-bluff. And, if he misses on the turn, he can still bluff on the river. We use the Esther Bluff to get the bet through. (And it works most of the time. Just don’t try it against a calling station or a no-fold’em maniac.)