The 5%: Why I Decided to Write A Girl’s Guide to Poker

When I first started playing poker, I had no clue what I was doing.

“You played that hand terribly,” the man sitting next to me told me once. “Really?” I asked. “How so?”

“Well for starters,” he said. “I could see your cards.”

This kind of behavior wasn’t unusual to me – as a young girl at a casino, I was used to getting advice (he wasn’t wrong by the way – I flat-called pre-flop with A♣K♣, flopped the nut flush draw, checked it down the whole way and lost). As a matter of fact, commentary was welcome: I desperately wanted to learn the game but didn’t know how. 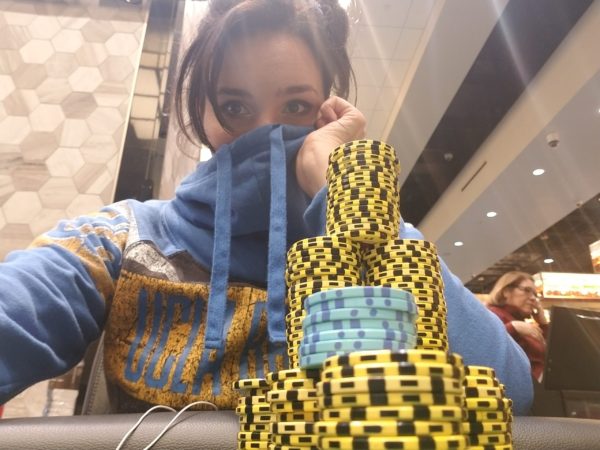 Me, at the poker table

I wasn’t totally a rookie – my dad plays Hold ‘Em, and he’d taught me a thing or two. But it’s very different playing poker for play money with your dad and Grandpa in front of the T.V. on New Years than playing in a casino. I knew that a flush beats a straight but not which two pair beats which two pair. Or that two pair can get “counterfeited.” Or that pre-flop, you’re supposed to raise. Whoops.

While it may sound silly to describe learning poker as coming of age story, let’s just say “Coloring Up” would be my kind of chick flick.

And I did love colors – rainbow, girly, bright colors. Red, orange, yellow… magenta. I liked colors so much that I made more than 180 pastel flashcards with neon sticker labels – a surefire way to learn poker starting hands. I found a pre-flop raise chart online and some free Texas Hold ‘Em quizzes which I converted to my very own rainbow study set. My first few flashcards had to be redone because nothing smears like gel pen. 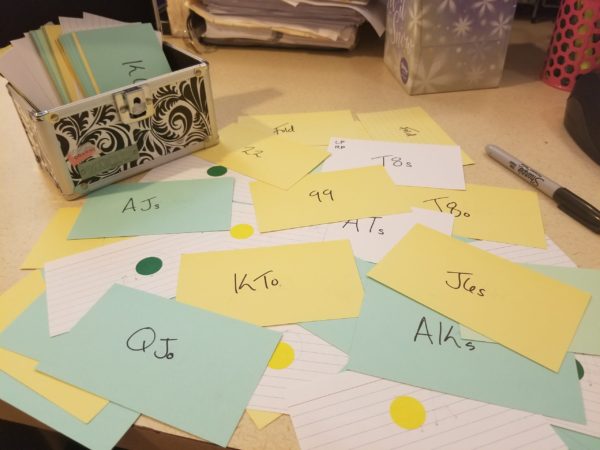 I wanted to learn poker, and I wanted to stay true to my female identity.

Casinos aren’t very good for either.

I found quickly that you’ll learn more from a few nights (or lunch breaks!) studying than you will in a few months playing. And when it comes to getting in touch with one’s feminine side, it’s best not to smile when you 3-bet. Or giggle. (Unless you are a master of human interaction – in which case, go for it! But I’m the kind of gal who buys books on how to handshake non-awkwardly.)

As I wrestled with the highs and lows of my early 20s – moving from California to D.C., landing my political dream job, getting laid off after an election, gaining weight, losing weight, and supposedly finding my future husband every two months before realizing that’s not him – I experienced the swings of poker. The rush of winning my first tournament, the cruelty of consecutive coolers. I did exciting things like grind $2 online into $500, and depressing things like move back to California where I was reminded of all my social problems in high school. Life has its own kind of up and down variance – talk about needing a big bankroll(!).

Never would I have predicted spending my 25th birthday in a 4:00 AM heads-up battle with a rude, curmudgeonly old man at the end of a Bicycle Casino midnight tourney. (We got it all-in pre-flop 99 vs AT and I lost the flip. I took second place prize money and left the casino wondering what on Earth I’m doing with my life. Typical 25!)

Poker became a hobby, an obsession, and a coping mechanism. As a former research associate specializing in Israel/the Palestinian Authority, I liked things that were complicated. Just like in my previous career path, I found great peace and focus putting together various moving parts, trying to solve a seemingly unsolvable game. Whether it be poker, politics, or the pursuit of happiness.

I hadn’t figured out the last two (still no peace in the Middle East). But when it came to poker, I had cracked the code: I knew what it took to win. And I wanted to write a book about it (I’ve never been very good at keeping secrets… !) With that goal in mind, A Girl’s Guide to Poker was born.

My book A GIRL’S GUIDE TO POKER is available now as ebook! Paperback in Jan. Subscribe for updates on my site https://t.co/1vCUNs5aRU , and pick it up here: #poker #newbook #pokerplayer #womenwriters https://t.co/WKfsKA416u pic.twitter.com/Ae0jgo0Upg

I’d already done quite a bit of writing in my past but none of it felt fully “me.” It was either intellectual and serious (like my piece on Facebook’s responsibility in combating Middle Eastern terrorism in the Wall Street Journal), or frilly and zippy (like my article on dating in the Los Angeles Times). They were parts of me, but even after having several pieces published, none told the true story. Nothing was both girly and smart – until it came to my book on poker. Texas Hold’em was the ultimate test of personality and cleverness. The felt was where booksmarts and streetsmarts could combine, where it pays to know your numbers and your smirks. Literally. 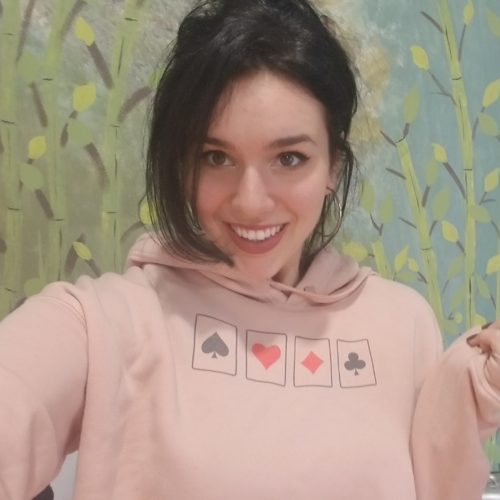 Funny enough, I never intended to write the book A Girl’s Guide to Poker for a female audience. The how-to and strategy advice applies to men and women. Cards don’t notice if you wear slacks or skirts. I didn’t start it as a women’s poker book, I started it as a woman’s.

I wanted to write it in my own voice.

Which makes it more about girl power than anything I could have purposefully conceived.

A Girl's Guide to Poker D&B Poker women in poker