The 2013 WSOP is the Coldest Poker Event in History

Scientists are at a loss to explain the meteorological anomaly that is the World Series of Poker. 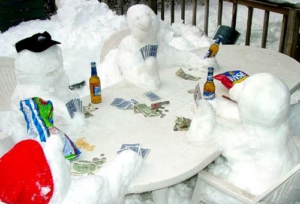 Poker doesn’t get much colder than this

In the 40+ years since the poker tournament series’ inception, an astonishing phenomenon has taken place each summer in Las Vegas: the hotter the outside temperatures, the colder the temperatures indoors at the WSOP poker tables. In fact, this year’s WSOP has set the mark for being the coldest poker event in history!

Back when the World Series of Poker began in 1970, there was just 1 table of participants. Multiple eye witnesses have come forward to testify that, indeed, back then, the temperatures inside Binion’s Horseshoe were almost identical to those outside the casino, on Fremont Street.

“once upon a time, we all used to wear shorts and T-shirts when we sat down to play cards – even Johnny Moss! Those were the days…”

As poker’s popularity has increased, with entry fields growing larger each year, degree by haunting degree, temperatures have slowly been dropping.

The difference in temperature became that much more apparent around 2003, when the bright minds at online poker sites like PokerStars first thought to brand hoodies. Initially thought to be a fashion statement among grinders, the real story behind the burgeoning hoodie popularity was that the online sites were just look for ways to help keep their sponsored players warm.

By the time the WSOP moved to the Rio’s Amazon and Pavilion Rooms in the mid-2000s, the cold weather was in full force. At the same time, more and more players started complaining about being “cold-decked” while “freezeouts” became the norm (instead of the once-popular re-buy and knockout tournaments). Indeed, the idea of “running hot” has literally become a relic of the past these days, as players sit and bear the frigid conditions in multiple layers of winter gear. 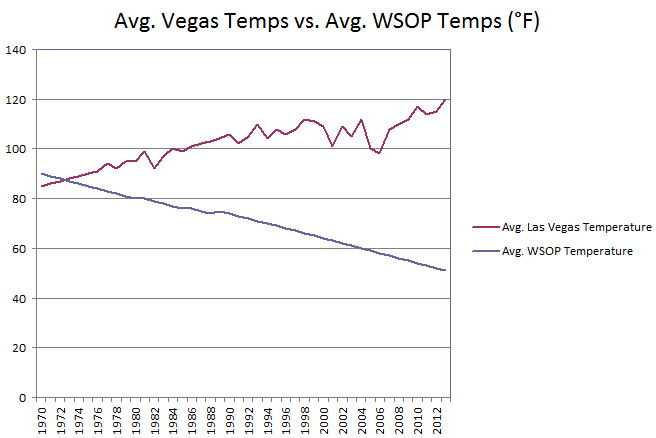 Longtime WSOP personnel, including Communications Director Seth Palansky and Executive Director Ty Stewart, have confirmed multiple instances of the sounds of chip shuffling being overwhelmed by the sounds of chattering teeth at this year’s WSOP.

The saddest casualty of the freezing WSOP weather this year, however, has been longtime WSOP Media Director Nolan Dalla, whose penis has “turned into a popsicle.”

The indoor cold at the World Series of Poker is particularly fascinating in that typical summers in Las Vegas see triple-digit temperatures sustained for practically 3 months straight. As a matter of fact, today’s supposed to be a record-breaker, with outside temps topping 120°F. Yet, poker players at the Rio can still be seen bundling up as though a blizzard is set to pass through the halls at any moment.

Daniel Negreanu to the Rescue?

In a valiant attempt to get to try and figure out what’s wrong with the WSOP weather, poker hero Daniel Negreanu has attempted to take matters into his own hands. Aside from trying to rouse the masses to action via his Twitter feed, Negreanu has been bringing a digital thermometer to the tables to track the changes in temperature. When asked about the issue, he replied:

“that’s the real reason I rented an RV and spend as much time in there as possible – I need to thaw out from time to time. Plus, I’ve asked my amazing assistant Patty to keep on preparing pot after pot of awesome hot soup and tea for me so that I can keep the blood in my arteries from freezing up”.

If that’s the status of a Canadian playing poker, one can only imagine how the Americans are faring at the felt…

In an effort to get to the bottom of things once and for all, Cardplayer Lifestyle was able to track down the official WSOP air conditioning technician. Here’s our interview with him:

So there you have it folks – the key to normal WSOP weather is to find this air conditioning technician and give him back his blankie! Despite our best efforts, we could not locate said blankie. Until someone does, we wish everyone at the poker tables good luck withstanding the deep freeze.

I can believe that poker players will bad beat even the tempature at the tables. Just one time. WA WA WA..