In an event seemingly scripted to treat poker fans, poker media, and frankly the entire poker world to something truly special, Daniel Negreanu, the world’s most popular and beloved poker player, just became the 2013 WSOP APAC Main Event winner.* Negreanu defeated a relatively small but very talented field of 405 poker players for the victory and his 5th career bracelet. He also won over $1 million in prize money. 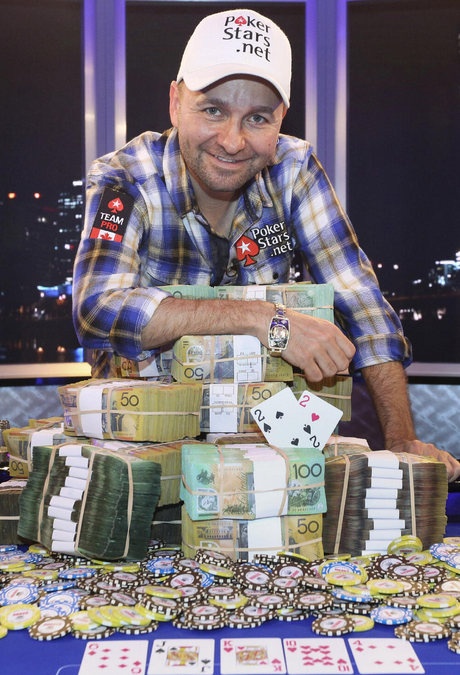 Streaking Towards Victory from Start to Finish

Coming off a rock solid 4th place performance in WSOP APAC Event #3, which was won by Phil Ivey, Negreanu was hungry for a victory, and it showed throughout the Main Event. Just 40 players cashed, among them such poker luminaries as Jeff Lisandro, Joseph Cheong, and Erik Seidel. Upon the elimination of Antonio Esfandiari in 9th place, on the final table bubble, Negreanu entered the last day of play 2nd place in chips and poised to bolt to victory.

Not having won a bracelet since 2008, and coming painfully close in a runner-up finish to Barry Shulman in the WSOPE Main Event in 2009, Negreanu clearly had plenty of motivation to try and steamroll his way to victory. He was able to amass approximately 50% of the chips at the table before the eliminations started coming. Still the chipleader with 4 players remaining, Negreanu found himself drawing thin against George Tsatsis with AQ against J9 on a QJJ4 board. The river queen essentially secured the victory for Negreanu, who entered heads-up play with an almost 11:1 chip advantage against Daniel Marton. He clinched the victory when his pair of 2s held up against Marton’s A7 in the final hand.

Negreanu Adds to His Legendary Status

The $1,038,825 in prize money represents the largest ever WSOP score for Negreanu and gives him over $17 million in career poker tournament winnings. Having watched much of the live stream during the 12 hours of final table coverage, this poker writer can attest to the fact that Negreanu was not only the best player at the table, but also the most entertaining by far. He seemed to just be loving the fact that he was sitting there and playing poker. Quite frankly, the other final tablists also seemed to sense something special was happening and, though trying to win, were enjoying being there for all it was worth; essentially realizing they were facing one of the game’s all time greats and that there wasn’t much they could do to stop him.

As many people in the poker world have pointed out, today, April 15th, is the two-year anniversary of Black Friday. Perhaps it’s particularly poignant to have poker’s biggest name player win poker’s newest high-profile event. Maybe Negreanu’s win in the inaugural WSOP APAC “signals” an unofficial turning point for the game of poker, which has suffered quite the downswing over the last couple years?

We can only hope this is true, that American former Full Tilt Poker players get paid ASAP, that online poker in America slowly but surely has a comeback, and that poker ambassadors like Negreanu continue to have performances par excellence that give a good name to the game we all know and love.

*All images and event results courtesy of PokerListings.com  and WSOP.com, and based on my watching the final table live streaming coverage.

Thanks so much for the kind words Justin! Very appreciated!