Some Good Karma at the South Point Poker Room

All too often we hear negative stories from the poker tables. Bad beats, bad karma, bad players, a bad run. Those familiar with this poker site know that rather than focus on the bad in poker, Cardplayer Lifestyle prefers to showcase the positive side of the game we all love. It’s with that in mind that I’m happy to share with you a brief story about good karma, which happened to me about a week and a half ago while playing at the poker room at the South Point Hotel and Casino in Las Vegas.

The South Point might ring a bell for those of you out there who were fans of the show High Stakes Poker, as it was the location for the action during a couple of the show’s seasons. It’s located about a 15-minute drive south of the Las Vegas Strip, down the I-15, by exit 31. I had never visited this poker room before, and generally speaking I always look forward to adding a new $1 chip to my growing collection.

I arrived around 11pm on a Thursday to find a couple of friendly tables running, mostly filled with locals by the looks of things, enjoying what seemed to be some fun games and decent action. As I always do upon arriving at a new poker room, I asked what promotions were running. I was told that they offered a $50 bonus for hitting quads when using both hole cards, with higher amounts offered to those fortunate enough to hit straight flushes and royal flushes – again using both hole cards.

I was running pretty well during the session, up approximately about $150 at my $1-$2 table after about two hours, when I looked down at my cards to see pocket Kings. Wouldn’t you know it, as my friend and GOAT poker vlogger Andrew Neeme would say “the flop came pretty favorable,” JdKd3s. I had flopped top set. One opponent called my $20 bet, and the turn then brought the beautiful fourth King. I had quads. The action went check-check to the meaningless (for me) river, which brought a third diamond, the 8. I was able to squeeze a bit more money out of my opponent with a small bet, but more importantly, when I scooped the decent-sized pot and smiled at my good fortune, I was ready to claim the extra $50 due me from the poker room. 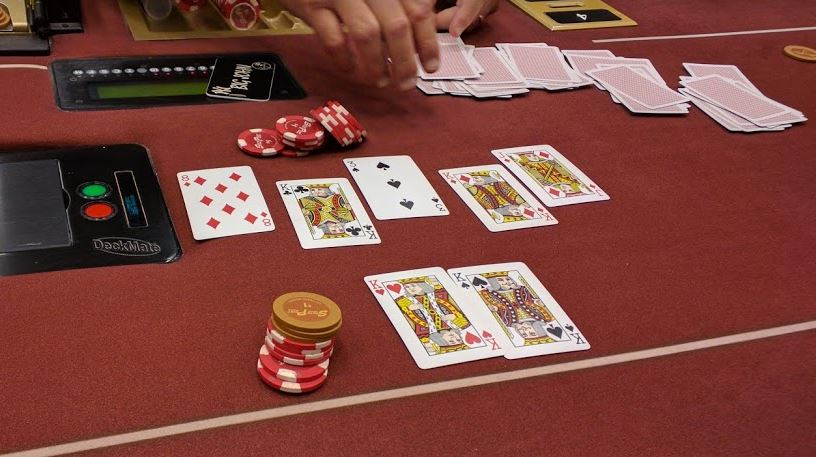 Rather than a floor person, another live dealer working at the room approached the table a couple minutes later with a clipboard for me to sign my name, $50 in red $5 chips, and four green $25 chips. As she congratulated me, I asked why she had brought me $150 instead of $50. She replied that there was an additional promotion running in the room wherein the first time quads or better are hit each day, the winner would get an additional $100; “Quick Hits,” she called it, and as it was only just a bit after 1am, I was the first one of the day to hit.

I couldn’t be more thrilled. I happily signed my name, pocketed the extra bonus money, and sent a picture of my good fortune to my wife, Miriam, back in Israel. Naturally, she was pretty happy, too. 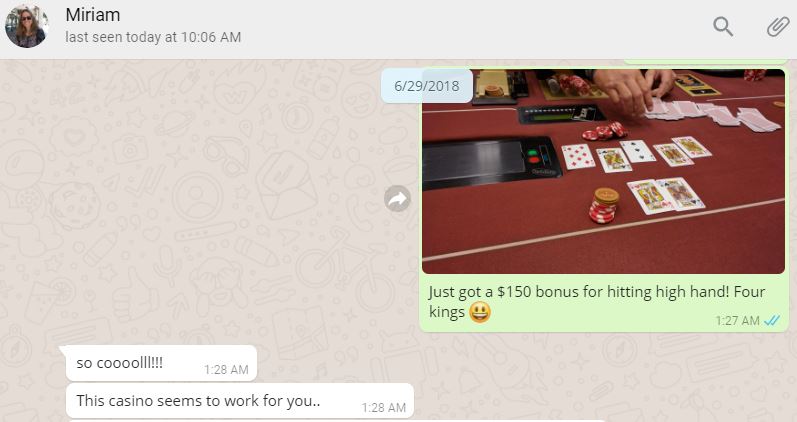 My session continued until, a few minutes later, the poker room manager approached my table and asked “are you Robert?” I answered in the affirmative and he asked “could you please come with me for a minute?” Nothing of this sort had ever happened to me in a poker room before; it almost felt like getting called into the principal’s office at school, but I had done nothing wrong to warrant this sort of attention. Warily, I got up from the table and asked the room manager if everything was OK, or if I had done something wrong. The following conversation then ensued between us:

Room Manager: “No, you’re good. We just have a little bit of a situation. See, the dealer who paid you out the bonus money didn’t realize that the $100 extra from our Quick Hits promo had already been paid out to another player who had made quads just before you at a different table.”

Me: “Oh. Well, what does that mean? I already signed my name and received the payout. What is supposed to happen?”

Room Manager: “Well, technically speaking, we made a mistake and there’s nothing we can do to force you to give back any money.”

Me: “Ah, I see. But is the money coming from the casino promotion or somewhere else?”

Room Manager: “Well, sir, it would come out of my pocket actually.”

I immediately opened up my wallet and gave the room manager his $100 that I had received in error, for which in return I received his profuse thanks. I then returned to the table, where I related the details of what had just happened to my curious tablemates. Almost in unison, they very kindly praised my decision as “the right thing to do,” with a couple of them saying “good job, Robbie; you’ll see, karma will get you in a good, positive way!”

While it might be morally reprehensible to not have returned the $100, one can’t find fault in someone who would have chosen to “adhere to the letter of the law, rather than the spirit of the law.” I just genuinely, truly felt that it was critical to have done the right thing, especially as it would’ve truly hurt another individual badly through no fault of his own.

Still, it’s no fun parting with free money that’s already firmly ensconced in your wallet. I sent a couple short voice messages to my wife to tell her what had happened, and she, too, responded that “of course you did the right thing.”

Fives. Lots and lots of fives.

Well, there’s no way I could possibly have known that good karma would strike so quickly, and in such poignant fashion. A mere 30 minutes or so later, I peered down at my hole cards to see a pair fives. Calling a pre-flop raise along with another player, you could not have imagined my surprise and delight when the flop brought the remaining two fives in the deck along with a Queen. I checked and got bet into, while the third player in the hand folded. The turn? Another Queen. How wonderful. My opponents stack went in and I quickly called, saying “I have LOTS of fives,” turning over my hand. My opponent couldn’t believe it, as he turned over QJ. A harmless 7 came on the river, so I ended up scooping a rather large pot in addition to claiming another $50 high hand bonus from the poker room. 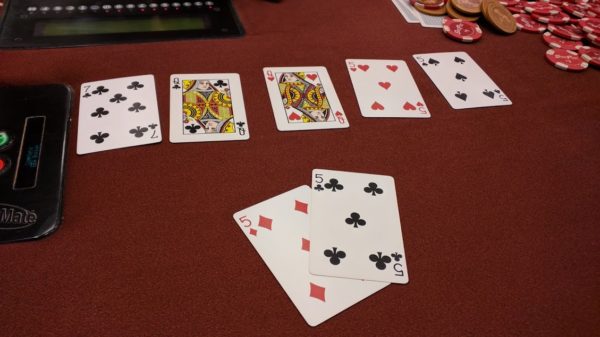 When I shared the incredible turn of events with my wife, she couldn’t believe it either!

Of course, not all stories of this nature have a happy ending, or resolve themselves with good karma making such a swift appearance. When they do, however, one can’t help but want to share the positivity with the world.

Good on you Rob. I love Southpoint. They always treat you like a guest not like an annoyance as some of the other poker rooms do. It’s a pretty classy place.

Thanks, Chris. Yup; I very much enjoyed my sessions there!