Solvers: The Death of Online Poker?

Solvers are a problem. A big problem. And it’s going to get worse. A lot worse. 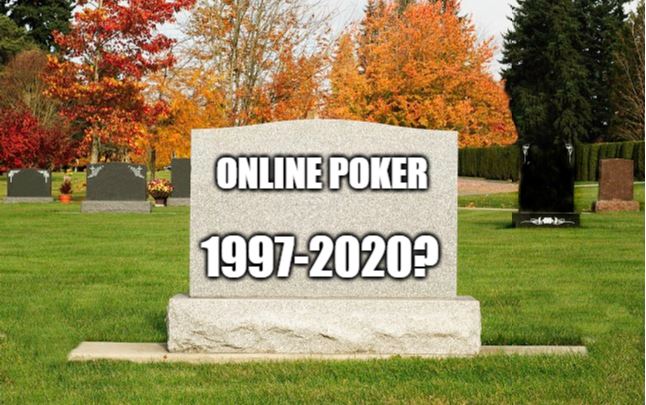 What is a Poker Solver?

The goal of a solver is to use game theory, combined with brute force computer processing power, to play perfect poker. With a few exceptions, that has been achieved. It may not be absolutely perfect poker, but it’s close enough that we can call it that.

I’ve talked about the difference between exploitive and unexploitable poker before, so I’ll just cover that in one sentence. A solver will not always calculate the best play against a particular opponent, but it will calculate the perfect play that cannot be exploited.

Some solvers these days also allow you to enter in ranges and opponent tendencies and then come up with an even better solution that attacks mistakes they make. As this becomes more common, and programmers find ways to automate it, it will just make them even more powerful. But even a solver that only finds the unexploitable plays will yield incredible results and beat the biggest games in the world.

When solvers appeared a few years ago, people used them to study. They fed hands into them and looked at the solutions and became better players. But we all knew that it wouldn’t be long before people found ways to use them to actually play poker. By now we all assume that it has been happening, especially at the higher stakes where winning without a GTO strategy has become very tough.

Some allegations about a professional online poker player named Fedor Kruse have recently surfaced that broke brought this discussion about solvers to the forefront of a lot of minds in the poker world, and the repercussions will be huge. Regardless of the truth of the allegations, the possibility that solvers were used in real time during online poker play is very plausible and in fact I am certain that there are players doing exactly what the specific pro is being accused of.

Solvers are going to kill online poker. There is no way the sites will be able to stop it. A moment of thought brings up multiple ways to use them without detection. And this guy can’t be the only one who is doing it. https://t.co/QOroLSBEAT

Poker players look for an edge, it’s the very core of the mindset of a serious player. And solvers provide a huge edge, even in the biggest games. I would be shocked if what the individual is being accused of isn’t happening on a regular basis.

What’s the Issue? Why Are People Worried?

The claim is that the professional poker player in question had two computers and played poker on one while simultaneously using a solver on the other. This is entirely plausible. It could absolutely be done. And the publicity this allegation is receiving will put the idea in more minds and it will happen more often going forward.

Online poker rooms generally do not allow the use of a solver, but how would they know when someone is using a separate computer? And even a moment’s thought gives us a wealth of ideas about how to do this.

Image recognition is so good these days that I wouldn’t be surprised if it was already possible to mount a webcam above a monitor, connect that webcam to another machine, and have that machine recognize what is happening at the tables. The second machine could literally provide GTO solutions in real time to the player with virtually no chance that a poker site could detect it because the two machines aren’t connected. The second machine doesn’t even need to be connected to the internet.

Did a player use a solver in real time to rocket to the biggest no-limit hold’em games online? His former roommates say yes, and they’ve provided evidence. https://t.co/tj9NNH6R1E

There are other solutions, too. Even a simple system like the pro is being accused of would be tough to detect and even tougher to prove. It’s more labor intensive going back and forth from one machine to the other, but definitely doable. A clever coder could probably do it all on one machine and bypass the online poker room’s ability to detect it. If there is enough money in it, poker players will find a way to make it happen.

This isn’t just bad for the high stakes games. Even if solvers were never used at lower stakes, and they almost certainly are, the low stakes players who think there is even a chance they could be cheated will stop playing in droves.

Well I hope they find a solver to keep the online poker ecology alive in the long run because things don’t look as promising with that regard right now.

I have been known as an online pro for at least 15 years. At live tables I frequently hear people talk about their own online experiences. I have probably heard at least 100 people tell me they were cheated in the Super User scandal at Ultimate Bet and Absolute Poker. To the best of my knowledge, none of them actually were cheated. They didn’t play nearly big enough to be in hands with Potripper or the other super user accounts, but they were sure of it.

Any hint of impropriety causes recreational players to flee the game. They are looking for a reason why they lose, and they don’t want to believe that they aren’t good enough to beat tough online games and the house rake. They blame it on being cheated. And now they will blame it on solvers. And they will stop playing because they think they can’t win because everyone is using a solver.

This brings us to the ecosystem that exists at an online poker site. We’ll just use fish and sharks and an ocean because it’s simple poker terminology we all understand.

When a fish is eaten, it means they have lost too much money too quickly and not won often enough and they have stopped playing. They are gone from the ecosystem. When the site manages to recruit a new player, a new fish is born.

If each shark eats one fish per table per hour, and the site is able to recruit new players at the same rate, we have a stable ecosystem. That isn’t sustainable forever because we don’t have an infinite supply of potential players, but it could go on for a very long time and if the birth rate is high enough it could be sustained indefinitely.

Now, if each shark plays just one more table, we are below replacement rate for our fish. And this becomes a death spiral. Because a table with one shark and eight fish only needs to recruit one fish per hour. But if a fish is eaten and replaced by a shark, now we need to recruit two fish per hour to replace those that the two sharks are eating. This is why many poker sites now limit the number of tables you can play, as it prevents the sharks from eating the fish too quickly and destroying the ecosystem.

What’s the Worst that Could Happen?

The worst case scenario, which is unfortunately also seems to be the most likely scenario, goes like this:

A few of the fish start using solvers and turn into very large sharks. A few more fish leave because they hear about solvers and think they can no longer win. The ecosystem gets out of balance and fish are being killed faster than the replacement rate. This causes fish to be eaten faster, and more players to leave because the rate they are losing money increases because a higher percentage of the player pool are now sharks.

This can eventually spiral out of control, with more and more fish being eaten and the ratio of sharks to fish growing quickly. A feeding frenzy sends the ecosystem into a tailspin. And as the player pool shrinks, the replacement rate also shrinks because the site’s player pool can fall below critical mass.

If you’ve ever tried to play single table tournaments at a small online poker room, you know exactly how important critical mass is. A site with 500 players can’t get a single SNG to run, but a site with a few thousand might have them running all the time. Once a player sees that their favorite game never runs, they leave for another site or stop playing online poker completely.

That failure to achieve critical mass will spiral as well. That SNG player who left may have also played some big multi-table tournaments on the weekends and now those player pools get smaller. The same thing can happen with cash games. If there aren’t enough people to get a game started for a few weeks, the game may be dead forever on that site.

Solvers can wreck the online poker ecosystem from three directions. They scare fish away, they help the sharks eat more quickly, and they turn some fish into sharks. This could wreck our ecosystem very quickly.

When I write about a problem, I always try to include some thoughts on a solution. But this one is tough. COVID-19 will continue to hurt live games for at least a while longer. Some live poker rooms will never reopen. I genuinely have no idea how online poker sites will stop players from using solvers. All I know is that the operators’ gaming integrity teams have a big challenge. The only poker games that might increase in popularity are unregulated home games.

Live poker tournaments will probably recover more quickly than cash games. People love to play them and in the last month or two there have been some big fields at events in the Midwestern US as well as other places around the country and the world. Whether it is smart to play a live tournament right now is up for debate, but the field sizes show that there are definitely people who are prepared to do so.

Online poker isn’t going to die tomorrow, but we’ve definitely found a health problem that needs to be fixed and I don’t have a good treatment plan. I hope the online poker rooms figure it out, or they are in big trouble.