Since April 15th, most of the news that has come out about online poker has been negative. With the Department of Justice effectively unilaterally blocking Americans from playing poker online, pent up demand for legalized online poker in the U.S. makes it only a matter of time before it becomes legalized and regulated. While a number of attempts have been made to enact laws on the state level, a new bill to legalize online poker on the federal level has just been introduced to the House of Representatives by U.S. Rep. Joe Barton, of Texas. 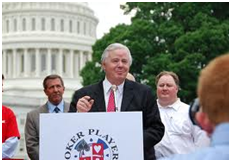 Barton’s Online Poker Act of 2011 has 11 co-sponsors from across party lines and is meant to create an interstate licensing program for Internet poker sites that simultaneously allows individual states to opt out if they so wish. Notably, unlike other bills of the past that have tried to legalize all forms of online casino games, Barton’s bill focuses specifically on online poker. Under the bill’s provisions, state or tribal commissions would be responsible for issuing licenses (similar to those given to a land-based casino), while the U.S. Department of Commerce would provide federal oversight.

The bill will also mandate that protections be in place to prevent fraud as well as gaming by minors. Specifically, this poker blogger is in favor of one of the bill’s provisions that would prohibit licensees from accepting credit card deposits, meaning that players would not be allowed to play poker online with borrowed money.

Naturally, supporters of the bill are hoping to get it passed through Congress by trumpeting its positives, namely creating thousands of brand new U.S.-based jobs as well as billions of dollars in tax revenues.