Shortly after publishing my last poker op-ed piece, I learned that none other than the great Nolan Dalla – the World Series of Poker Media Director – would be my main verbal jousting partner in the debate as to whether politics has a place in poker. A man so well-respected and influential in poker circles demands attention with every missive he publishes. Thus, I was delighted to read Nolan’s phenomenal counterpoints-filled response to my article.

Since Nolan was incredibly kind with his words, the least I can do is return the favor. Like many of you (I assume), I’m a tremendous fan of his work – specifically an admirer of his incredibly writing talent – though, of course I also don’t agree with all of his political views either. I consider Nolan to be one of my mentors as far as poker writing and personally feel he belongs in Poker’s Hall of Fame for all of his contributions to the game over the years. It is my hope to meet him in person some day soon.

Also, be sure to check out our video on the politics in poker issue.

In any event, I’ve had my day of shabbos to reflect on Nolan’s response. Below you will find my reply, which is meant to address and respond to a number of quotes from his piece – none of which have been taken out of context – in the order he brought them up.

Nolan’s Quotes Are Followed By My Responses

“Frankly, the t-shirts would hardly even be noticed on the streets of any cosmopolitan city.”

Perhaps, but I respectfully beg to differ. People put on a shirt displaying that specific message with the intent of getting noticed. And they do get noticed.

“Should poker tournament organizers and/or casino management assume the role of Big Brother and become the game’s new fashion police? Apparently, some misguided decision-makers think so.”

I don’t believe that adding rules for dress casts any organizer in the role of Big Brother nor policeman. For example, does the Monte Carlo Casino’s dress policy mean they’re Big Brother or policing? Further, they also prohibit military or religious dress. Does this mean they’re anti-war or atheists, censoring people’s inherent rights to religious freedom?

Not once did I use the words “censor” or “censorship” in my original article. I don’t believe that the issue at hand is a freedom of speech issue. I specifically stated that I was in favor of all forms of expression – just not while playing in the events or at the poker tables. There’s a time and place for everything.

“What I mean is — it doesn’t matter what the t-shirt says.  Players should be able to wear what they want, with any messages they wish.  This is especially true since players fund the tournaments entirely and have no obligations to the host.  So, unlike pro athletes which would clearly be forbidden to express themselves politically on their uniforms because they are paid and under contract, poker players are individuals who should be able to enjoy reasonable rights of free expression.”

As I touched upon in my original article, I don’t understand how the first two sentences of this paragraph have anything to do with the rest of the paragraph. Players funding a tournament entirely means they have no obligations to the host? Doesn’t every player entered into a WSOP event have to sign a consent form that entails various obligations?

Take a look at WSOP Rule #52 and #53 C (viii) and 53 D (in Section V). It says it right there in black and white: “For all Tournaments taped for television, participants may wear apparel with multiple logos, patches or promotional language. Rio reserves the right at all times to impose a ban on any apparel deemed objectionable by Rio, in its sole and absolute discretion.”

I don’t recall an instance of anyone ever conscientiously objecting to these rules on the grounds of “freedom of speech”.

“However, I’m willing to make some concessions for the sake of common decency. Mr. Strazynski certainly sees differences between overtly offensive symbols and political statements of free expression, doesn’t he?  He can’t be suggesting that a short catchphrase in support of the people who reside in Gaza or the West Bank is the really same thing as bearing a swastika, can he?  I mean, that’s quite a leap.  Most people including myself, would fully understand disallowing a player wearing an overtly offensive message or displaying such a symbol to play in any poker tournament.  Why?  What’s the difference?  Well, because those symbols are universally repudiated.  They are intended to promote hate.  Unless he’s mentally ill, the wearer of such a shirt knows this.”

I am all for common decency. When debating within the realm of “normal”, I of course see a difference between overtly offensive symbols and political statements of free expression. Then again, if we are really going to get into examining the extremes here and be sticklers about certain points, we all know there are still Nazi sympathizers out there to whom Swastikas would probably not be the least bit offensive. The very First Amendment protecting freedom of speech that Nolan bases much of his “no censorship ever” premise on allows anyone in America to display a Nazi flag, no matter how repulsive or offensive it may be to the overwhelming majority of the population.

How to characterize such people who’d bear Swastikas? I’ll borrow Nolan’s brilliant quote: “If they’re willing to display such heinous idiocy publicly, then I’m all in favor of knowing mutant intelligence conveniently aided by the cretin’s own veracity.  In other words, thanks for letting us all know up front that you’re a moron.”

At a cash game table, sure – I’d love to turn away. I’ll go ahead and ask for a seat change. But if I’m in a sanctioned tournament, I can’t really do much turning away, can I? Whether I like a person’s message or not, I ought to be trying to focus on poker while at the table, not be distracted by a message.

And therein lies one thing I perhaps failed to mention in my previous article: the display of political messages during poker play taints the purity of the game. Recreational poker players turn to poker for a break from everything else going on in the world. They also watch poker on television to see POKER, not politics. Professional poker players play the game to make a living; not to make a statement, political or otherwise.

I do think a distinction ought to be made with regard to support of an issue versus a person. For example, I very much support Sheldon Adelson in terms of everything he’s done to help Israel, yet I can’t stand the fact that he’s so vehemently against legalizing online poker in the United States; I couldn’t be more anti-Adelson on that! People are complicated and ought not to be boiled down to a single issue. Single issues, on the other hand, are by definition narrowly focused.

So I suppose it would make logical sense to allow people who play a game to advocate in support of the game being played.

Frankly, we need more politics — just about everywhere.  We need more discussion about problems and possible solutions.  Not during poker hands, mind you.  But politics is every bit as appropriate as table chatter about a sporting event or a bad date that went wrong.  And there’s no way any misguided ruling is going to stop open dialogue between players.  Language and thought shouldn’t be guarded by anyone, let alone a corporation, and what appears on a t-shirt should be the last thing the organizers of a poker tournament should be interested in.  There are other things to worry about.

It’s funny. Nolan is using many words with which I agree, but I think we see things differently. We DO need more discussion – just about everywhere, but NOT everywhere. Not during poker hands and not at the table. While politics might be considered “appropriate” as table chatter and there’s nothing overtly wrong with it, I don’t think it ought to specifically be forced into the conversation. There are innumerable forums for political discussion; must the poker table specifically be one too? I agree 100% – No ruling ought to limit open dialogue among players or what comes out of a person’s mouth while playing poker.

If someone started talking politics to me at a tournament table, I’d kindly ask them to shut up and play poker. Then, on the next break, I’d invite them out for a drink with me so we could talk politics.

What appears on a T-shirt is precisely the last thing tournament organizers ought to be concerned with. That’s exactly why (e.g., via a dress code) they ought to prevent any issues from ever arising in the first place – so that they, too, can focus on poker.

Please Hear Both Sides Out in the Politics in Poker Debate 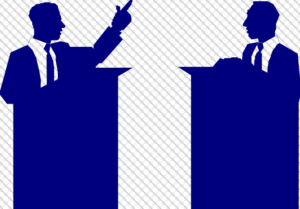 As with any debate, it behooves the audience to hear out both sides and I thus thank all other poker writers out there who’ve given us equal exposure in their news stories via mentions and links to ours. Many sites, however, have not.

As of this publication, Google Analytics indicates that my previous article has been read 771 times. Those Analytics also indicate that 62 of those “hits” have come from Nolan’s blog via the link to my article.

Now I don’t expect to have nearly the type of name recognition as Nolan, but his piece couldn’t have more obviously been written as a response to mine. I cannot help but wonder, then, why so many in the poker community seem to only be “spreading the word” via their social media accounts and in poker forums for just one side.

A writer’s goal is to stir up discussion and encourage debate. I believe Nolan will agree with me when I say that neither of us is out to “win” via our articles, but rather we’re doing what we’re doing in order to express both sides of the coin. We want to get the poker community talking about this and by all appearances we have.

All I’m saying is that I encourage anyone with an interest in the issue of politics’ place in poker to at the very least read what both of us have to say before forming your opinions.

Israel is a terrorist nation that murders children, how can anyone support this disgusting nation?