For 11 years I was more a poker promoter than a poker writer, although I frequently used my writing to promote the game. I was employed by an online gaming company and served as head of a marketing team encouraging players, veterans and novices alike, to play poker. We made our money collecting rake and tournament fees. 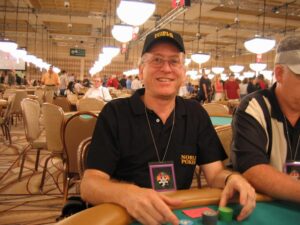 One of the best ways to get newcomers into the game, we found, was to call on them to follow the examples of Chris Moneymaker and Greg Raymer. After all, these professionals began their careers playing online. One could acquire the necessary poker skills on the internet and the only way to achieve success, we insisted, was to play poker in our online rooms. For a time, we were doing quite well in this mission.

In this capacity I reported on poker tournaments. I interviewed players, known and unknown. I traveled. I met Doyle Brunson and he gave me an autographed copy of his book. Day by day, I wrote about the game of poker.

The ultimate goal, our promotional efforts suggested, was playing in the World Series of Poker. After a short time working at the gaming company, I accompanied five young players to Las Vegas. As they took to their tables for their first experiences of tournament play, I stood behind the ropes. I rejoiced with them when they won big pots. I felt their pain when they lost a bet and when, one by one, they busted.

I was invited to sit down and join the action at a charity poker event, raising money for some good cause, the nature of which I no longer recall. I sat down next to professionals and famous personalities. Film and television stars were in the room. I had my picture taken with “Everyone Loves Raymond” star Brad Garrett. I won a few hands, I lost a few, and then I was eliminated. I came in 34th in the tournament. I had played in the World Series of Poker! A dream come true!

Except, it was never my dream. During my career promoting poker, I did not play much poker. There were the few hours I spent online and offline in company poker tournaments. And there was a memorable hour playing at a cash game in Macau when I came away from the tables with a $700 profit. Except, those were Hong Kong Dollars not worth all that much. 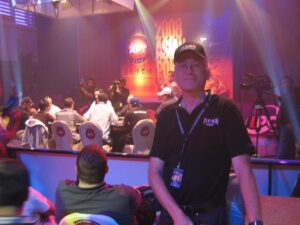 You see, I am not really a poker player. I did not grow up playing the game. I can barely remember if a flush is better than a straight, or if it is the other way around. I don’t understand the strategy, the math. I don’t have a poker face; I cannot bluff. More than anything else, I don’t have the patience to sit at a table for hours on end waiting for the good cards to reveal themselves.

I am not a poker player but for many years I proved myself to be quite a capable poker writer. And for me, that’s just fine. I understand aspects of the game that are enticing to players – the hype, the thrill, the allure of winning big. I’m a poker writer because I put into words what poker players are feeling. I experience the magic of poker vicariously; my goal is to communicate the appeal of the game to players who are ready to cash in. There is so much to learn about poker – the psychology, the angst, the elation and the luck of the draw. No, I do not play poker professionally, but poker is my passion and my diction is my chip stack!

Ellis Shuman is an online gaming marketer, travel writer, book reviewer, and author of Valley of Thracians, a suspense novel set in Bulgaria. He blogs at The Times of Israel and The Huffington Post, as well as on his personal blog, Ellis Shuman Writes. Born in Sioux City, Iowa, Ellis has lived in Israel since […]