Poker Tips by George: Winning the Pot with a Weak Hand

Every poker player knows that prudent starting-hand selection is essential for winning. Next, one hopes their hand improves on the flop. After all, the best hand on the flop usually is favored to take the pot on the showdown. Or is it?

The Power of the Raise

Even modestly skilled players realize the power of the raise. A raise can help you take the pot even when your hand does not improve on or after the flop. Example: It’s a $4-$8 limit hold’em game with a full table of nine players. In middle position, you are dealt Jd-Qc – a marginal starting hand. Using the hold’em algorithm, you quickly tally 30 points – 12 for the queen +11 for the jack + a bonus of 7 for the connectors. That score readily satisfies the 24-point minimum criteria for middle positions. So, you are in to see the flop. (Reference: Hold’em or Fold’em? – An Algorithm for Making the Key Decision).

There is a raise in front of you by a loose-aggressive player. You call with some trepidation. Let’s see how the flop fits your hand before investing further. A loose-passive player also calls. 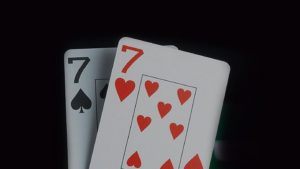 The flop comes down: 6s-9d-2h. Garbage! – unless someone happens to hold a pocket pair of 9s, 6s or 2s, no one has hit this flop big. Those holdings are not likely. You doubt that either opponent has improved his hand. The early position quickly checks to you. The flop didn’t improve your hand either. But rather than check along to see the turn, you decide to bet out with a bold display of confidence and a reverse tell using the Esther Bluff. Both opponents muck their hands, and you take the pot –  not a big one to be sure, but it will pay a few blinds. More important, had you checked along, you would be offering a free card to your opponents. Most likely, one or both of them held honor cards in the hole. There’s a good chance one of them would connect on the turn or the river; in which case you lose. Better to win a small pot than to lose a much bigger one.

There are other occasions when a poor hand can win the pot. That would be the case if there is a relatively novice player at your table who is tight-passive. Call him John. He is seated two seats to your left. He is a young man who you suspect is fairly new to the game. Perhaps he learned how to play at Hyperino online casino. Every so often, he peeks at a chart showing starting hands for different positions.

The cards are dealt. The under-the-gun (UTG) player opens the betting. In middle position. you look down at pocket 7s. You call the bet. Meanwhile, John scans his chart. After some delay – met with scowls from some of the other players – he also calls.

The three of you see the flop: 6s-9d-2h (the same garbage flop as above). The UTG, the original better, checks his hand. From previous observation, you know he is not a deceptive player who might slow-play a strong hand. You are quite certain that the flop missed him, too.

You take the initiative and open the betting. John hesitates, and then folds his hand; and the UTG follows along. Once again, you have won the pot with what could well be the worst hand.