One of the most widely used words in our language is “time.” By way of example, here are some of the common ways and phrases it is used in daily life:

There are many occasions when the word “time” is used in playing poker. Understanding them can be vital to your success.

Playing poker in a casino, with a full table, it usually takes about two minutes to complete a hand, from start to finish. That means about 30 hands each hour. That doesn’t leave much time for a knowledgeable player to focus on all the information he gathers and to seek even more (e.g., tells) so as to make the best decision.  If a player takes too much time to contemplate his action, a voice may shout out, loud and clear, “TIME!” If two players to the player’s left bet out before him, his hand may be declared “DEAD!” – out of play, and he forfeits whatever chips he has already put into the pot. Instead, he could have announced “time!” and been allowed a bit more time. 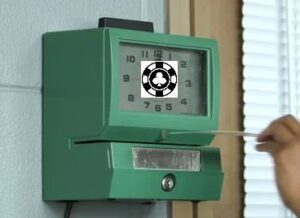 The casinos — both brick and mortar establishments as well as online casinos like gamomat casino betrugstest — charge a fee to play. How else can it pay all its expenses and still be profitable? In some games, there is a time collection, assessed at regular intervals. In other games, the casino takes a rake at the end of each hand played. There usually is also a drop for a bad beat bonus. And it is customary for the winning player to tip the dealer. All in all, at a $1-$2 table, this costs each player about $25 per hour. Play for eight hours – a typical session, and that adds up to about $200 for the session.

No wonder casino management encourages dealers to speed up the game. The more hands dealt, the greater the total amount that the casino gains from drops. The dealers’ tips also grow. It’s just a matter of time. . .

READ ALSO: Poker Tips by George: The Language of Poker

And don’t forget the time-breaks that players take while at a table. Players need time to go to the restroom or for a walk (often to avoid going on tilt after a bad beat or two). Players may also take a break from the game to eat. Generally, the casino allows players to be away from the game for 20 minutes to an hour. The floor may issue a warning before removing that player’s chips and personal possessions. Don’t be surprised if you come back late to the table to find another player in your seat. Recover your chips and possessions, and then wait to be seated at another table.

These are some of the many ways that time can play a significant role in playing poker. Time can make the difference between a winning session and a loser.