Poker Tips by George: The Education of a Poker Player

Not long ago, my friend Clem gave me a gift – a copy of The Education of a Poker Player by Herbert O. Yardley. I had heard of it previously, but had never seen it. It was published in 1957 – over 60 years ago. It’s a classic. It offers lots of good advice for playing the poker games that were available in those days. 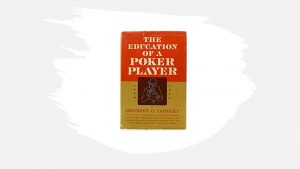 After I started reading it, I could not put it down. Although it does not cover Texas Hold’Em, it does cover draw poker and several other varieties of the game, some of which you’d even find offered online nowadays at WV online casino sites and the like. Most likely Texas Hold’Em had not yet made its way into the poker world at the time of publication. I have read many poker books in my time but never one like this.

First, a few words about Herb Yardley. He was born in 1889 in a small Indiana frontier town and became fascinated with the first game of poker he ever saw. He happened across this game in the rear of a saloon in his hometown. At the time he was just 16 – president of his high-school class, editor of its school newspaper, captain of the baseball team, and a good student with a flair for math. Monty’s Place, owned and operated by James Montgomery, was his favorite locale. He played well, and Monty, recognizing Yardley’s talent, took him under his wing and taught him his own winning poker ways.

READ MORE: In Tribute to Our Senior Editor George Epstein

Let’s review the advice from his book for playing five-card draw. You will find that it applies to Hold’Em as well. I have added some of my own and Lou Krieger’s words of wisdom (from his book, 52 Great Poker Tips) to round out the advice found in Yardley’s book.

Poker Tips to Live By

1. Study your own weaknesses, as well as those of your opponents.

2. Keep a poker face and keep silent. (Give no tells.)

3. Don’t complain when you lose a hand. (It happens to the best of us.) And don’t gloat when you win a big hand.

4. Never drink alcoholic beverages while playing. Be alert. Keep your wits about you at all times.

5. At a new table, it takes a few rounds for the game to loosen up. Consider playing aggressively to steal the blinds. Alternatively, stand aside and watch the game for a short time to learn the players’ traits.

7. Make note of the loose players who pay to play in almost every hand. We call them pigeons. Most of their hands are weak. They will draw cards even when the pot odds are low. They came to play.

8. If there are too many tight players, move to another table.

9. If there are extremely aggressive players (“maniacs”), try to sit to their left so you see how they bet before investing your chips. Alternatively, move to another table or take a long break from the game. (Tables do change their texture over time.)

10. Starting with a pair of Aces or Kings – the top made hands – try to thin the field. Your hand becomes an underdog with four or more opponents. Your raise will help; but if three or more opponents have already bet before you, just call to stay in the hand.

11. With a high two-pair, Aces-up, Kings-up, Queens-up, or Jacks-up (in hold’em, this could happen on the flop), as above, raise to thin the field. But just call if three or more opponents have already bet.

12. Catching any three-of-a-kind, raise no matter how many opponents bet before you.

If you follow the above advice, you will be well on your way to poker success!