Poker Tips by George: The Art of Check-Raising

Much like when you begin a session of online pokies in Australia, when playing Texas Hold’em poker, the goal is to win as much money (chips) as possible. There will be times when you catch a monster hand. Plan your action so that you squeeze out every possible chip from your opponents. Slow-playing and sandbagging are common trapping tactics to accomplish that goal. Don’t chase out your opponents at an early round of betting. Keep them in the pot so they can “contribute” at a later round when the bets are bigger. “Stop-and-Go” is a rarely used tactic: From an early position, you check and then call an opponent’s bet on the flop or turn, but then open-bet on the next round when the bets are bigger.

Check-raising is another tactic used by many players to build bigger pots, but there is a big difference. . . It relies on aggressive play! As originally conceived, the check-raise is used when you hold a powerful hand and believe it will win the pot.

READ ALSO: Poker Tips by George: Skills Are the Key

Instead of betting out from an early position, check your hand. Then, after an opponent bets out – and perhaps several others call his bet – you raise when the action gets back to you. Chances are that most, if not all, those who had bet before you will call your raise. And the pot grows! The check-raise is a trapping move intended to build the pot. By checking and then raising your opponent’s bet you use his position against him to get more money into the pot when you’re holding the nuts; you are check-raising for value.

You can also use the check-raise tactic as a bluff or semi-bluff when you think your opponent may hold a better hand. Be sure to use the Esther Bluff for reinforcement. For example, you have flopped top pair on the board, but your kicker is mediocre. You suspect an opponent also has top pair, but could hold a better kicker. 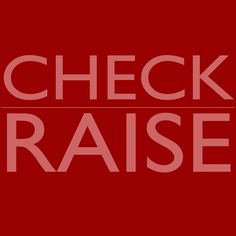 (1) From an early position, you flop what you believe is the top hand. You check in the hope that an opponent to your left will make the bet. After several others call his bet, it is your turn to act. Now make your raise, expecting most, if not all, of the bettors to call your raise. A multi-way hand is best. The rule here: Be sure one or more of your opponents is aggressive enough to make the bet. That may not happen if you are seated with a bunch of tight players. Note: You must be in an early position.

(2) If there is any doubt that an opponent will make the opening bet, don’t go for the check-raise. If you check and no one raises, you will have given an opponent a free card. (A no-no.) Bet for value instead.

(3) You can also use the check-raise as a bluff to make your opponent throw away the best hand. When using the check-raise as a bluff, don’t try it if there is more than one maniac or calling-station at your table. The most common situation where the check-raise can be used as a bluff is in a heads-up pot when you’ve called out of position. Check-raising as a semi-bluff is also a great way to add strength to the way you play your drawing hands. Next time you flop a flush draw, check-raise instead of check-call and give yourself a second way to win the pot.

(4) While you should be using the check-raise during every poker session, be careful not to do it so often that your opponents wise up to you.