Poker Tips By George: Small Pocket Pairs Can Be a Big Problem

When playing Texas hold’em, before the flop you must decide whether to fold or play your two hole cards. High pairs and face cards make your decision pretty simple and straightforward. But what if you’ve got a small pocket pair? Expect to be dealt a pocket pair, on average, once every 17 hands – about 6% of the time.  Even less often – about 2.8% of the time – will you peek down to see a small pair in the hole, namely anything from pocket sevens down to pocket deuces.

Considering that you’ll get dealt approximately 25-30 hands per hour in live real money poker, that means that you can expect to get dealt a small pocket pair approximately once an hour on average. So, if you’re going to be playing a session of about 7-8 hours in length, you’ll get dealt small pocket pairs often enough that it warrants having a well-thought-out strategy for how to best play them.  Otherwise you will have to guess, which is a formula for losing.

When you raise with a small pocket pair in early position, get four callers, and the Flop is King Jack 10 pic.twitter.com/kIaLKiRxV4

In limit hold’em a small pocket pair is usually playable only from middle/late position, and even then preferably if there are no raises and it is a multi-way pot (to maximize your potential win if you get lucky and hit your set). With three or more opponents staying to see the flop, the implied pot odds are high enough to warrant investing a single bet to see the flop with your small pocket pair.

For example. let’s say you’re holding pocket 5s in a $4-$8 limit game and you are anxious to see whether the flop brings you a third 5, to give you a set. With only two more fives in the deck, the odds are almost 8-to-1 against this happening.

If there is a raise before you act, or likely to be one after you call, you should muck those cards. Even if the early positions just limp or fold, an opponent behind you could still raise. Before declaring, be sure to look to your left for any tells your opponents behind you might offer. Is a player picking up a handful of chips, preparing to raise?  If so — unless he is very deceptive – fold.

Be wary of shoving with a small pocket pair in Hold’em. It’s only a slight favorite over 2 overcards, but a 4:1 dog against a bigger pair!

Your opponents’ playing traits are also important. With one or more aggressive players yet to act, it is highly likely there will be a raise. There could even be a re-raise (a three-bet). Even a single raise makes it not worth calling with your small pocket pair. Fold! Indeed, with two or more aggressive players in the game, you should be considering a table change. With just one such player at your table, try to request a seat change and get seated just to his left, so he declares before you. Should he raise, save your chips by folding your small pocket pair. 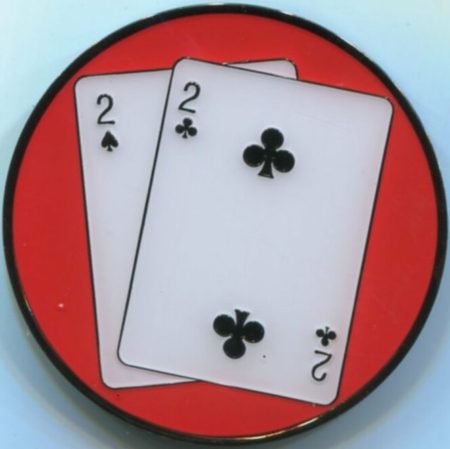 As you can gather by now, with fewer opponents staying to see the flop, there is a better chance your small pocket pair will hold up until the end. That doesn’t mean that you should be raising to thin the field though. If you do, players with high hole cards are still likely to call your raise, so you remain an underdog and mathematically likely to lose the hand.

Should you get to see the flop, the general rule is that your hand must improve on the flop to warrant further investment – unless you get a free turn card when everyone checks.

It’s always fun to hit a set with a small pocket pair, but most of the time it’s a hand that can be somewhat troublesome to play. Keep the above tips and advice in mind when playing limit hold’em and hopefully that’ll keep you out of trouble or from bleeding away chips when it’s otherwise unwarranted.