Poker Tips By George: On Staying Ahead

It’s quite common to get ahead early in a poker session. Looking down on your larger stacks of chips gives you a wonderful feeling. Victory! Success! At that point, the trick is to stay ahead – and, hopefully, build your stacks even higher. Easier said than done… 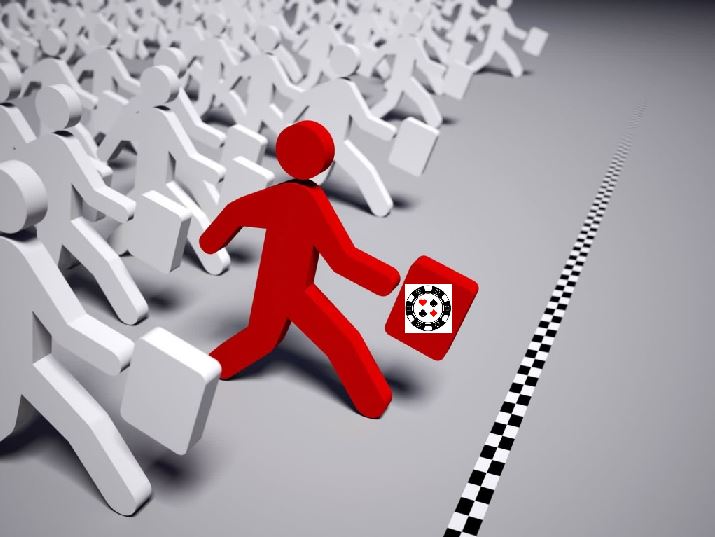 There are many reasons for losing it all back, and then even having to buy in for another stack in order to stay in the game. Like it or not, that’s quite often the way it will go. On the one hand, being ahead early in the session gives you self-confidence. You just KNOW you are a highly skilled player; no one can beat you. WRONG! You have no control over the cards dealt out during a hand. Don’t blame or berate the dealer. You might be inclined to condemn the poker gods for a run of second-best hands or for suffering several bad beats on the river. In one case, after catching a full-boat on the turn, your monster hand loses to a bigger one on the river.

It took you a while to build up your chip stacks, but you can lose all those winnings in one fell swoop – frustrating, to say the least. Playing no-limit hold’em, all it takes is one hand when you catch a monster and lose to a bigger monster backed by a mountain of chips. That happens so often – too often! It may take longer in limit games, but it’s a scenario so common it might as well be taught to beginners when learning how to play poker in the first place.

Your opponent makes a huge raise on the river. He is a tight player who would bet so big only with a very powerful hand. You stop to ponder. You have the Ace-high flush. There is a pair of deuces on the board, so a full-house is possible.

Trying to read the raiser’s hand, you are sure he would never start with a small card unless it was free to see the flop; but he is not in the Big Blind position. Perhaps he had a pocket pair? But, with two deuces on the board, it’s hardly likely he holds the other pair of deuces in the hole. Thus, you are convinced that, most likely, he has a high flush – second-best to your nut flush. So, you call his raise.

How about that… he does not have a big flush, not even a full-house. He turns up a pair of deuces! He caught a set on the flop and quad deuces on the river! Rare? Very much so; but it can happen – and sometimes does. Bad beat stories are full of tales like these that have of course happened in real life play. Now, you have lost back all of you hard-earned winnings – and then some.

What can you do?

You are upset, and that’s OK. Who would not be under such circumstances?

The first thing you can do is to take a break to calm your anger; don’t make matters worse by going on tilt. A brisk walk in the fresh air may calm you down. Convince yourself that it was just a very poor chance-happening. Not likely to happen soon again. Then go back into the casino and get back into the game. Consider a seat or table change. It may make it easier to rebuild your self-confidence. Playing scared won’t help you rebuild your stacks.

What else can you do? Answer: Focus on the game and be determined to use all your skills – all the way from table and seat selection to slow-playing and bluffing when the situation is right. One more thing: No one stops you from quitting while you are still ahead.