It’s been said that the 3 most important things to have at the poker table are “position, position, position!” Unfortunately, U.S.-based online poker players have found themselves in a horrible position ever since Black Friday, simply unable to play the game they love from the comfort of their own homes. While millions across the U.S. played solely for fun, those players for whom online poker was paying the bills have essentially been “forced out of work”. While many such online poker pros have given serious thought to relocating abroad, where they could continue playing legally, just the thought of the bureaucracy and hassle involved has forced plenty potential emigrants to stay put. Enter the “Poker Refugees” service.

Since Black Friday, Poker Refugees has gained a lot of notoriety (even in the mainstream press!) for being the first to launch a service to help U.S.-based online poker players relocate overseas. Offering a full-service relocation package, including everything from banking assistance to airport pickup to the numbers of local pizza stores, Poker Refugees specializes in moves to Canada, Panama, and Costa Rica, all home to relatively larger communities of American expats. They even connect new clients with other poker players who’ve already relocated! Once settled in their new countries, players are free to legally play online poker at their favorite rooms again. Thus far they’ve successfully relocated 173 players to the countries mentioned above as well as to Ecuador, Mexico, and Malta. 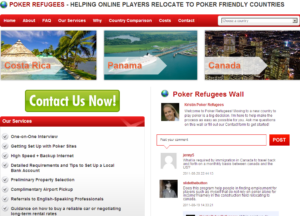 The idea whole behind the service is for the online poker player to be able to keep on grinding while paying someone to do all the administrative work (finding an apartment, setting up a bank account and Internet connection, etc.) that goes into relocating. The price tag: $1,000 for a single person, $750 per person if moving with at least 1 roommate, or $1,500 per family. It should be noted that this is in addition to all applicable transportation and moving costs.

Many high-profile online poker players like Phil Galfond have already made the move abroad, while other poker players who already hold dual citizenships have relocated to places like Malta, Mexico, the U.K. and Brazil – all in the name of being able to continue playing poker online. Time will tell if Poker Refugees or other similar relocation services will spark more of a “mass exodus” from the United States.