UPDATE: Poker Fighter has just released their new mobile app! More information on this towards the end of the review.

Every poker player has to start somewhere, but with the dizzying depth of strategy involved in modern-day poker, it can be hard to know just exactly where. Training videos are often overwhelming, with too much happening too quickly for it to be of any use to new players. Really, what the new poker player needs is the lessons that can only come from guided, coached, experience. With Poker-Fighter poker training, that’s exactly what they will get. 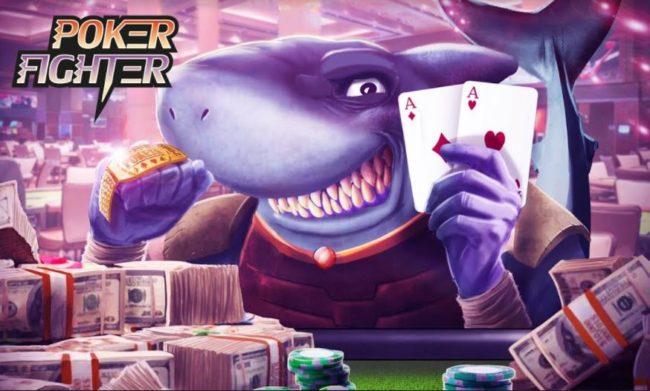 A comfortable, risk-free environment to learn

Despite having logged tons of hours at the tables myself, the fact that I still suck at basic poker concepts made Poker-Fighter intriguing to me. I’m a former subscriber to many training sites, so I know their limitations. Too often, I find myself learning about some interesting tidbit of poker theory during study, only to then be too scared to pull the trigger when the same situation comes up in my own play.

The result is that I know a lot of stuff but can’t execute much of any of it. One of Poker-Fighter’s great strengths is that it eliminates this problem by placing you in a risk-free simulation of actual gameplay. 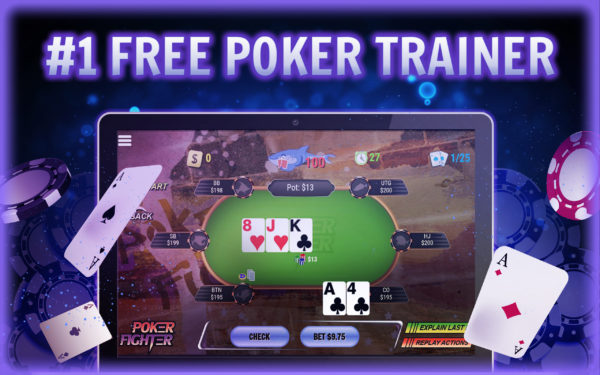 It’s important to note that both words here are important: the “risk-free” part gives you the leeway to allow yourself to make mistakes, while the “gameplay” gives you tangible scenarios that you can practice. That’s why I love the fact that the design of the cards, tables, and chips are done in such a way that you feel like you are sitting at an actual online poker table.

Simulating the visual environment that players will find themselves in (at least in the online version of the game) will go a long way towards making new players feel comfortable with the look and feel of a real-money poker game before they ever have to risk a cent.

Having a risk-free simulation means nothing if it just serves as a forum for players to ingrain bad habits as they repeat the same mistakes over and over again. Poker-Fighter takes care of this problem with a surprisingly deep and complex web of strategy guides for the beginning player. 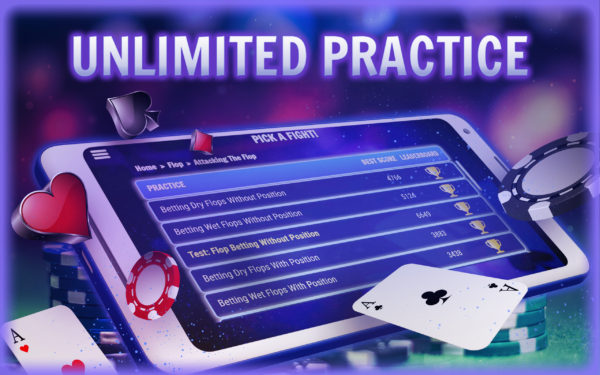 While the content is robust, the layout and presentation make sure that it is also easily digestible. For example, pre-flop strategy begins with the very first decision of any hand – whether or not to play the cards dealt to you. From there, we get a wealth of clearly laid out, progressively developed poker theory. Some of the themes touched upon include positional awareness, how to attack flops, and even re-raised pots on the Turn.

At every stage of the process, you are able to receive detailed feedback about what the correct decision to make is, and why. By simply requesting an explanation of the move, you can get a pop-up that will tell you everything you need to know. Having this information available to you immediately following a decision creates a great positive feedback loop. 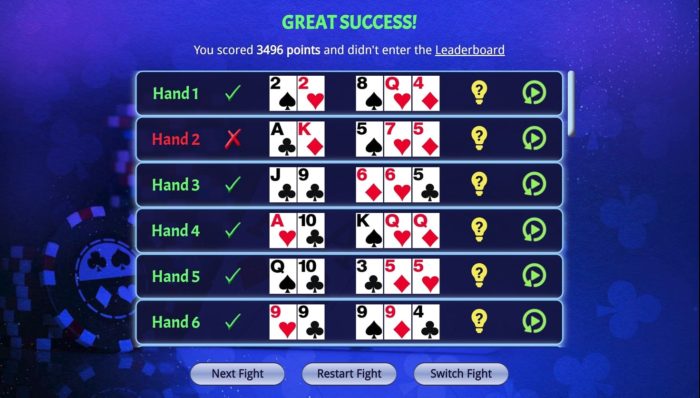 While novice poker players who want to improve their game tend to have very intensive study habits, they are still looking to have fun. Learning any new skill is a challenge, so if the education method is not engaging it will be a long, difficult, slog even for the most dedicated students. This is where Poker-Fighter has other training programs trumped in spades (pun intended), with great graphics and gameplay that will make you forget that you are actually learning anything at all (the best kind of learning!). 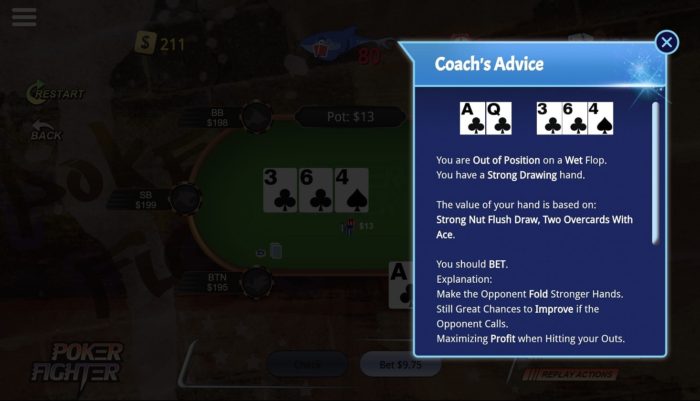 Even better, there is a leaderboard and “Hall of Fame” that turns the learning you are doing into something that will also get your competitive juices flowing. Not only is this a ton of fun, but it has the added benefit of being a great way to put a little pressure on you when making you poker decisions, even though you aren’t risking any money in the moment. 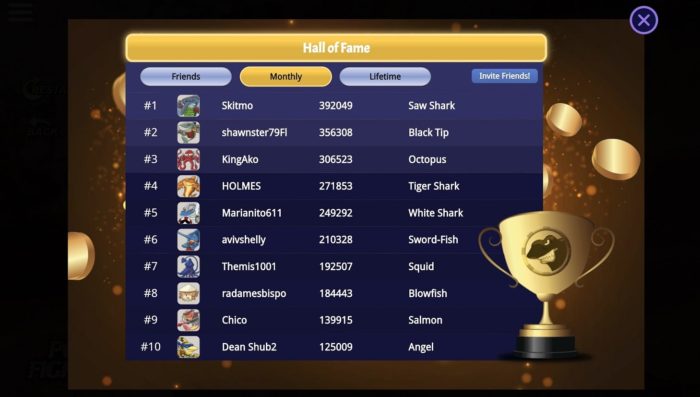 Poker-Fighter has just announced that their training software is now available in the form of a mobile app. Since you’re not always in front of your PC or laptop, having Poker-Fighter at your fingertips via a mobile device means that you can now practice and improve at poker while you’re on the go! 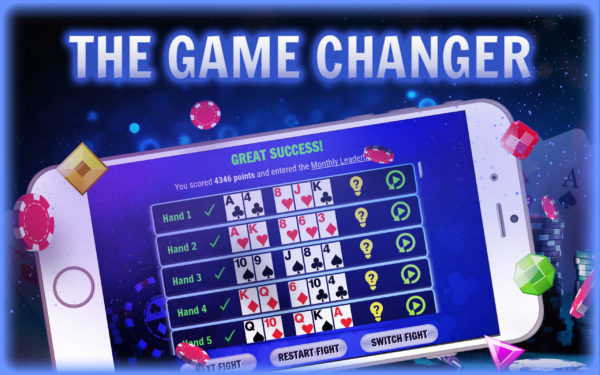 The web version of Poker-Fighter was first released in 2017 towards the end of the summer. The team behind the product have since also released some great updates and upgrades, including: 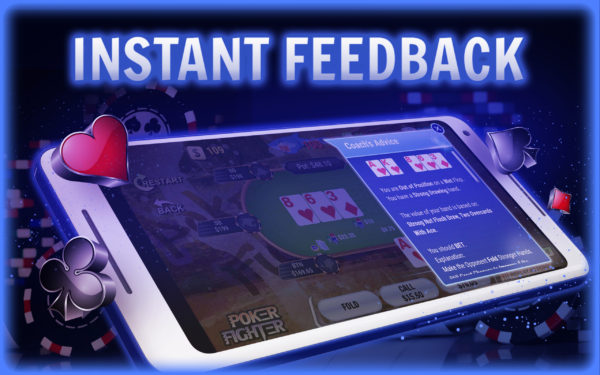 * NEW TEAM PROS: The Poker-Fighter developers have brought on WSOP bracelet winner Shai Zurr and professional poker player Eyal Casias as ambassadors to join their pro team. Zurr and Casias have spend a great deal of time advising the developers on hand ranges and other high-level poker concepts, so you can rest assured that the feedback you’re receiving from Poker-Fighter is truly top-notch! 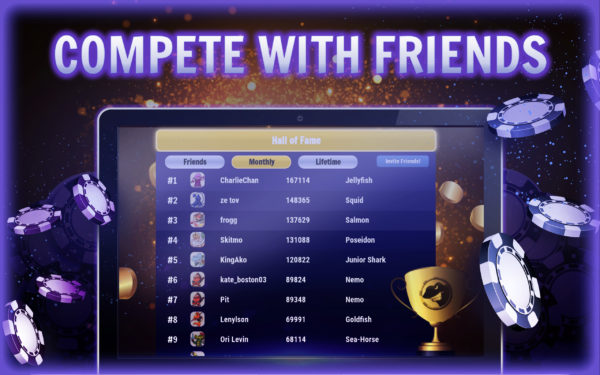 While using Poker-Fighter, I couldn’t help but marvel at how far poker has come. When I was starting out as a player, all you could really do was hop online, watch a few training videos, and try to figure it out without loosing too much money. The ability to be interactive with your poker knowledge from day one as a starting player is something that should not be taken for granted. 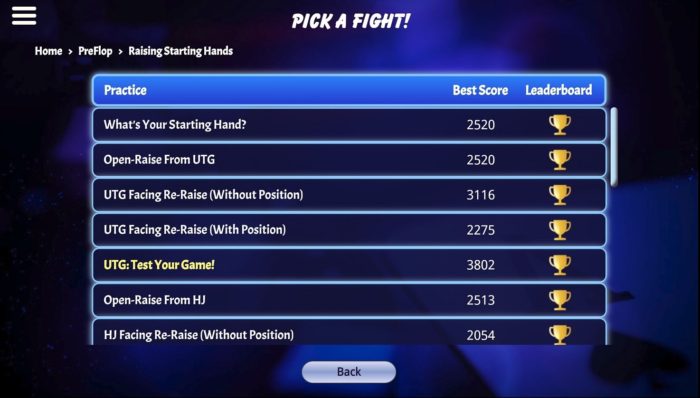 While it’s true that there is a certain limitation to the lessons learned – they are designed to teach basic, ABC poker – that slightly limit the value to intermediate or advanced players, Poker-Fighter fulfills its mission of making poker theory easily accessible to anyone looking to learn.

Overall, it’s a great concept that will make studying poker easier, more effective, and more fun for a new generation of poker players.