Poker By the Book: Poker Faces: The Life and Work of Professional Card Players

Anthropology professor David Hayano had always loved playing poker with classmates, friends, and, on one occasion in 1971, with strangers at a smoky cardroom in Gardena, California. The visit didn’t go well. He lost fifteen bucks. Hayano returned in 1973 and won almost three hundred dollars in an hour. “Nobody I knew earned more than $300 per day at a job,” he wondered. “Yet there were dozens, even hundreds of players in these and bigger games. How did they do it? How could I do it?”

The result of Hayano’s curiosity, Poker Faces (1981), is the only ethnography of a poker room and, for that reason alone, a valuable resource for understanding the culture of the game. Hayano spent over 10,000 hours at the tables in Gardena, an area in southern Los Angeles that, during the 1970s and 80s, had the greatest concentration of draw poker clubs in the world.  By 1975, he had played in every club and competed regularly in the highest-stakes games. 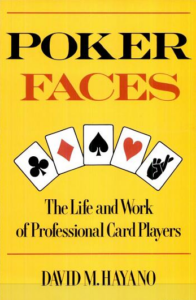 Hayano’s aim is to illuminate an American subculture that can’t be understood from the outside. Most of poker’s distortions and self-serving stereotypes remain unchallenged, Hayano insists, because they are based on little or no participation in the cardrooms, coupled with a vague understanding of the social dynamics of poker-playing. “My attempt to present an insider’s view of the work of professional poker players,” he writes, “could only be accomplished by prolonged immersion and, most important, by being a player.”

Social Organization of the Cardroom

One of the strongest parts of the book is Hayano’s understanding of how different social groups meet and mingle in the cardroom. Players are united—or estranged—by age, gender, occupation, sleeping schedule, or preferred betting limit. They play poker for all kinds of reasons. For many elderly regulars, to take one example, “their main concern seems to be to pass the time in small-stakes games, meet with friends, watch television, and eat moderately priced meals. In this respect, generally maligned and neglected social institutions such as bus depots, racetracks, and cardrooms may fulfill beneficial social functions that have gone unrecognized.” Poker, for these folks, isn’t about winning money. It’s about routine, structure, and a kind of community.

Different stakes may also link or alienate the cardroom population. Two regulars may frequent the same club for 10 years, only 20 feet apart, and yet they may never recognize or interact with each other. Doctors and lawyers may become known suckers, the unwitting victims of college dropouts, plumbers, or housewives.  The cardroom redefines—and sometimes inverts—the social pecking order.

What Makes a Poker Pro?

Defining a professional poker player is tricky business. It depends on results that can rapidly change or be skewed by one big score (Jamie Gold, anyone?). Neither is pro status linked to formalized education: ability is judged by skill and results, not by a piece of paper saying that you went to “poker school.”

There also are problems of self-definition or, perhaps more accurately, self-deception. Someone may make $50,000 a year and call herself a part-time player; someone else may consider $5,000 enough to “go pro.” “Yep, I’ve been a pro for the last five years,” says the haggard, hooded guy across the table just before he punts off his stack.

Problems of definition are one thing. But what about the special personal characteristics that distinguish winners from losers?

You know why most of these players go busted? It’s not because they don’t know how to play. That’s not it. It’s because of their egos. They’ve got to show everybody and themselves that they’re the world’s greatest. I just sit back and play my game, and they can make all the moves and talk they want. In twenty years I’ve seen hundreds of these flashes in the pan. Give them the trophies. I’ll take the money.

According to Hayano, the most common traits of winning players are:

Winners are also able to create a gap between how they appear to others (too loose) and their actual strong holdings. “Regulars and pros often put on the image of a person who gambles, makes risky bets, bluffs frequently, or is nothing but an incompetent player, especially to newcomers in the game who do not know them. This may involve advertising a bluff, making a loose call and showing your hand, or feigning an ignorance of the rules,” Hayano notes. Winners talk loose and play tight.

Despite success on the felt, the poker pro’s career can be volatile and lonely, filled with rough emotional and financial swings. The mythical life of the poker pro—the steep stakes, the bling, the gaudy houses and sexy mommas—is a far cry from the humdrum reality of most workaday grinders. “A few players in the limelight have realized these dreams of success,” Hayano writes. “But to the inestimable number of strugglers and casualties of round-the-clock play and broken-down bankrolls, the career is more a chimerical delusion, more like a nightmare factory.”

“After last night’s loss I went to my car looking for a rope or a gun but I couldn’t find them. When I did find the rope I tied it to a post and stuck my head in it. But the rope broke. So here I am.”

If life is tough for winners, then it’s even worse for the losers. Hayano estimates that losing players compose a whopping 95-99% of the cardroom population.

Why do so many players lose? First of all, most players are simply inexperienced, imperceptive, and bad at fundamental poker strategy.

Second, they put too much stock in luck, believing that independent random events are somehow linked (“the flush hasn’t hit the last nine times; it must be coming in now!”).

Finally, losing players lack discipline. They fail to keep records, study, or exercise proper time and bankroll management. They play for hours on end with no plan in mind. They insist on upping the stakes and pursuing “get-even” strategies. And they fail to distinguish between poker and casino games of pure luck, falling victim to roulette, craps, or the slots.

Unfortunately, “staying in action” becomes the only option for digging out of a financial hole. “I can’t afford to work,” says one losing regular. “What would I do if I did? Make three bucks an hour? I’d have to work 200 years just to get even for the last month.” Gambling becomes both the cause of financial ruin and the only hope for salvation.

The Life and Work of Professional Card Players—What’s Changed?

Much has changed in the 30 years since Poker Faces was published. In the 1970s, poker was often stigmatized alongside gambling, addiction, and other kinds of “deviant” behavior. Today, even if it remains maligned and misunderstood, the game has become more mainstream. Thanks ESPN!

It also goes without saying that online gaming has revolutionized poker’s landscape. Even in those same smoky Gardena cardrooms, we can find smartphones with poker tracking apps and online poker refugees who have been forced into the live arena.

Overall, though, Poker Faces remains a rigorous, readable ethnography of the poker room. Hayano succeeds in revealing part of poker’s fascinating and dysfunctional culture, and for that we should be grateful.