Poker by the Book: The Professor, the Banker and the Suicide King

“I think there was more pressure on everybody because it was so high. I could see the people playing in it were affected by it a little bit. That’s what he wanted to do. Get everybody out of their element. And I think he did it a little bit with $100,000-$200,000 because after it was over, we all said, ‘No, we’re never going to do that again.” 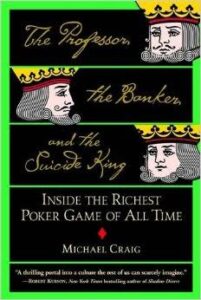 Scanning the walkway outside McCarran International Airport, I noticed a man who looked like a burly Harry Potter.

Jared had made it to Vegas.

I had recently seen him and his puggle, Flynn, in Boston during an early leg of my poker road trip. My plan was to make a counterclockwise loop around the country, visiting friends, family, and casinos along the way. Assuming, of course, that my ’99 Ford Escort would be up to the task.

And so far it had been. In the last few weeks I’d driven past corn stalks and cattle farms, past the ragged red rocks of Badlands National Park, past colossal wind turbines arranged in neat diagonal rows. I saw the strange majesty of Devil’s Tower, which bulges out of the Wyoming wilderness like a jagged tooth. Now I was in Las Vegas to meet Jared, who was spending a weekend here to celebrate a new job.

“Just visited my brother in Montana,” I said. “And I haven’t lost all my money at the tables. So I’d say it’s going well.”

“Still running. We’ll see if it gets me to New Orleans.”

“I hope so. You wouldn’t want to disappoint Flynn.”

“Of course not,” I said. “Maybe we can win him some doggie treats this weekend.” 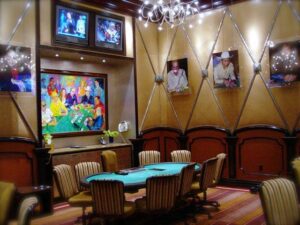 Bobby’s Room, at the Bellagio

After a meal at CraftSteak, Jared and I walked into the Bellagio for some poker. As we took our seats at a $1/3 no-limit Hold’em table, I peered into a luxurious glass-enclosed area where players sat with piles of high-denomination chips.

Named after poker pro Bobby Baldwin, the room has become part of Vegas lore. Maybe its most famous story—captured in Michael Craig’s gripping book The Professor, the Banker, and the Suicide King—involves Andy Beal, a Dallas banker and entrepreneur who caught the poker bug in the early 2000s. He’d found success in real estate at age 24, eventually transitioning to banking in the late eighties. By 1992, Beal Bank was worth $1.2 billion.

But Beal’s pursuits weren’t about money: he worked out his “Beal Conjecture” in theoretical mathematics and, after studying satellite technology, he launched Beal Aerospace in 1997. The company closed in 2000, with Beal reportedly spending $200 million of his own money. Nevertheless, he insisted, the failed venture “was a wonderful experience, and I wouldn’t trade it for anything, not even the money I spent on it.”

Thanks to an obsessive work ethic, a love of numbers, and an endless bankroll, Beal eventually turned his attention to poker. After growing bored with the “small” $80/160 limit at the Bellagio, he casually requested a higher-stakes game—much higher. News spread quickly among the Vegas sharks. Who was this bold fool wagering hundreds of thousands of dollars?

And so, a rivalry was born. On about 10 occasions from 2001 to 2004, Beal played heads-up limit hold ‘em against some of the best players in the world. The core group—known as “The Corporation”—included Todd and Doyle Brunson, Jen Harman, Chip Reese, Chau Giang, Howard Lederer, and Ted Forrest. At first, Beal was outmatched, but, as his obsessive nature kicked in, the skill gap began to close. He also made eccentric demands to keep his competition off-balance, including:

A great virtue of Craig’s narrative is that it doesn’t take sides. One of the most inspiring parts of Beal’s story, and why I ended up rooting for him, is his tenacity and willingness to master the skills of almost any imaginable field: real estate, mathematics, space flight, limit Hold’em—take your pick. His core philosophy—underlying his approach to poker and to risk itself—seems to involve flouting accepted wisdom.

None of this, it turns out, guarantees success. Phil Ivey crushed Beal in a monumental series of heads-up matches, winning $16 million in the final contest. The Dallas banker returned home down—but apparently not out. In January 2015, after a decade-long hiatus, Beal challenged Todd Brunson in Bobby’s Room. He lost $5 million.

This is the best I could get. Looks about even now at 5 million each pic.twitter.com/I1oA74Liym

Now, staring from my $1/3 hold ‘em seat into the room where Beal and The Corporation had wagered millions, I recognize most of the high-rollers. There was Main Event winner Huck Seed. There was Survivor contestant and “broke living” expert Jean-Robert Bellande. There was high-stakes regular Eli Elezra. And there, slumped genially in his chair, presiding over everyone, was the Godfather himself, Doyle Brunson.

Just another night in Bobby’s Room.

“Your action.” The dealer’s reminder jolted me back to my $1/3 game, where the table was waiting on me. Oops.

Jared, sitting on my direct right, had raised again—to $15—and I had to decide whether the six-seven of hearts was worth a call. Playing with friends could be awkward, especially if they whined or whimpered when they lost. But Jared wasn’t this type. He eagerly looked to take everyone’s chips—including mine—and I did the same.

We were poker players, after all.

I tossed in calling chips and, summoning my inner Beal, watched the dealer spread a five, eight, and nine with two hearts. I had binked the perfect flop!

Meeting my eyes with a grin, Jared bet $50. I raised to $125. Raising was best, I figured, because a bunch of scary turn cards might prevent his overpairs from continuing. Not that I had to worry much about Jared folding—it wasn’t something that he liked to do. He quickly called my raise and, after seeing the turn, the ten of hearts, instantly moved all-in.

“Call,” I said quickly, exposing my baby flush. “You have any outs?”

“Nope,” Jared said, chuckling along with me, “but I have a pair!”

As the dealer pushed me the pot, I felt uneasy. Luck, not skill, had shipped me these chips. I glanced back inside Bobby’s Room, my gaze resting on the brim of Doyle’s ten-gallon hat. What separated me from Doyle or Andy Beal? Yachtloads of cash, obviously, but there was more to the answer—things like effort and daring and courage bordering on foolishness.

I shifted my chair so that its back faced Doyle. Focus was another virtue that I needed to work on. At least I could do that. As for the future, there were plenty of fun possibilities: I could battle heads-up with Jared, or drive in circles around the country, or read Michael Craig’s book.