888poker is perhaps one of the most enduring and popular poker rooms in existence today. Established in 2002, it initially started out as Pacific Poker but then rebranded later on. As one of the pioneering online poker rooms, the brand boasted of an international user base that included players from the United States of America. In 2006 though, the brand lost its foothold in the American market thanks to the passing of the Unlawful Internet Gambling Enforcement Act (UIGEA). As a result, 888 Holdings PLC opted to focus the marketing of the brand and its services to the European market (specifically the UK and Ireland). In the years that the online poker room has been in operation, it has grown to become the second largest in the world. During peak hours, they will routinely service up to 20,000 concurrent players.

One of the major reasons for 888poker’s rise has been its focus on drawing in casual players while still providing a competitive atmosphere for those who want to improve their skills. This is where its wide selection of live and online tournaments come in. Other than these, the poker room was also one of the first to come up with its own proprietary poker software.

As of now, the poker room continues to grow in Europe and is also looking to expand it’s already solid foothold within the United States. 888 Holdings PLC, the company that owns 888poker, already has several partnerships with private gaming entities operating in New Jersey and Nevada. For its European operations, the last half decade saw the emergence of local versions of the 888poker brand in Spain and Denmark. 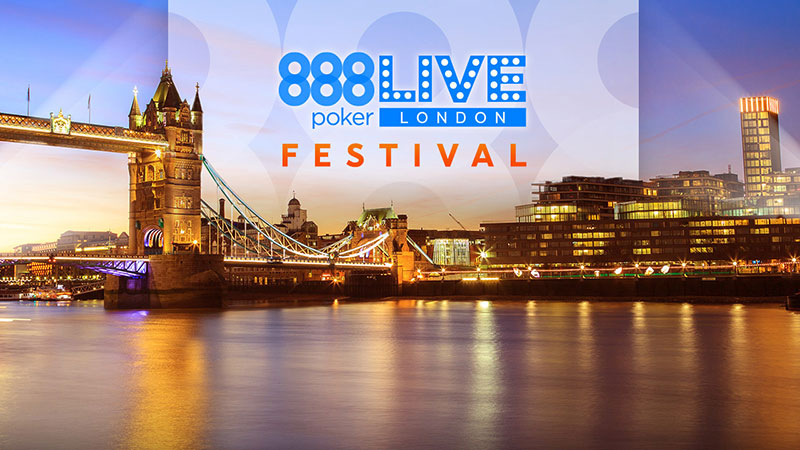 When it comes to live tournaments, few other operators can match what 888poker has to offer. The poker room currently sponsors the most prestigious poker tournament series in the world today: the World Series of Poker. 888poker has been a main sponsor of the WSOP dating back to its 2014 iteration in Las Vegas. Its own 888poker LIVE tournament series serves up numerous qualifiers for the WSOP’s Main Event. Other than this, players can also buy into the poker room’s satellite tournaments for a chance to win a Main Event or Crazy 888s Event package worth $12,600 or $2,700, respectively.

As for the 888poker LIVE Tournament series, these are usually running throughout the year. Some of the more popular stops on their circuit each year include the London Aspers Casino in the UK, Bucharest, Romania, and Barcelona, Spain. Their stops in Sao Paulo, Brazil, Madrid, Spain, and Lisbon, Portugal have also been notably well-attended festivals, too.

888poker boasts a wide selection of poker games and tournaments that cater to players of varying skill levels. Aside from Texas Hold’em, the online poker room also has Omaha Hi, Omaha Hi Lo, 7 Card Stud, Snap, and Blast poker. For special tournaments, players can choose from The Mega Dozen, The Mega Deep, The Mega Micro, The Mega Knockout, and The Turbo Mega Deep. These tournaments form the The Mega Series and are available on Sundays with buy-ins that go as low as $3. Aside from this, the poker room also has The Goldfish, The Swordfish, The Catfish, and The Blowfish tournaments that make up the Fisn ‘N’ Chips series. The main draw for these daily online tournaments is their relatively low buy-ins contrasted by substantial cash prizes. Making up their High Rollers series of online tournaments are The Hurricane, The Typhoon, The Tornado, The Whale, The Twister, The Breeze, The Cyclone, The Monsoon, The Lightning 6-Max, and The Thunder 6-Max. Much like The Fish ‘N’ Chips, this series of tournaments are available regularly and offer more than substantial prize pools for players.

888poker has always had an impressive list of poker professionals that it sponsors for Live Tournament series such as the WSOP, 888Live, and WPT. Among the players who at one point or another had represented the 888poker brand are Spain’s Ana Marquez, Russia’s Daria Feshchenki, and Brazil’s Vivian Saliba, as well as 2014 WSOP Main Event Champion Martin Jacobson, Dominik Nitsche, Kara Scott, Sofia Lovgren, and Chris Moorman. Additional poker pros who at some point have been a part of Team888 include, but aren’t limited to, names such as Bruno Politano (Bruno Foster), legendary Australian cricketer Shane Warne, Xuan Liu, J.C. Tran, Natalie Hof, and Jackie Glazier. At one point, 888poker also had UFC MMA star Georges St. Pierre and Brazilian footballer Denilson as its celebrity ambassadors, along with boxing champ Chris Eubank Jr.

Just by registering for an 888poker account, players can get as much as $88 with the poker room’s no-deposit bonus promotion. If they want more, then players go ahead and deposit to get a 100% match up bonus that can go as high as $400 (using the promo code: WELCOME100). In addition to this match bonus, the poker room will also give players 7 tickets that they can use on the daily $500 Depositors’ Free Tournaments. As if this wasn’t enough, players can also expect 2 tickets for a $1,000 Depositors’ Free Tournaments and 1 Ticket that can be used on the First Depositors’ Challenge Tournament. In case these aren’t enough, the poker room has an Invite A Friend referral program that rewards players with $10 as well as the chance to win iPads, iPhones, and more if they’re able to successfully refer other people to open new accounts with the poker room.

Always check the terms and conditions before signing up and claiming any bonus.

Play 888poker on All Your Devices

For players who want the best 888poker experience, it’s advisable that they use the poker room’s dedicated poker client for computers (desktops/laptops) running on Windows as well as Mac. They can also opt to play on their browsers but the experience will be a little limited thanks to some features being exclusive only to the desktop poker room client. Aside from desktops/laptops, it’s also possible for players to access the poker room on the go thanks to dedicated mobile apps for both Android and iOS. Players can of course also choose to use their mobile devices’ browsers if they can’t be bothered to download the mobile apps.

Cassava Enterprises (Gibraltar) Limited, a subsidiary of 888 Holdings plc, has a number of licenses that allow it to operate 888poker for a number of markets. To operate out of Gibraltar, the company has a license regulated by the Gibraltar Gambling Commissioner. For the UK market, the poker room has a license issued (to 888 UK Limited, another 888 Holdings plc subsidiary) and regulated by the Great Britain Gambling Commission. Other than these, the company also has licenses to operate in the states of Nevada and New Jersey.

888 Holdings plc was founded in May 1997 by two pairs of brothers: Avi and Aaron Shaked and Ron and Shay Ben-Yitzhak. At that time, the company was called Virtual Holdings Limited and its first project was Casino-on-Net. The company then went on to launch the Pacific Poker and Reef Club Casino brands in 2002. By the following year (2003), a decision was made to transfer the company’s administrative headquarters to Gibraltar. Thanks to the online poker boom of the early 2000s, the Pacific Poker brand continued to grow by leaps and bounds. Eventually, the company got listed on the London Stock Exchange as 888 Holdings. Following this, brands and subsidiaries under the company were re-branded under the ‘888’ brand name in 2006. This event then resulted in Pacific Poker getting renamed to 888poker.

The same year (2006) that it consolidated its brands under one brand name was also the year that the company suffered a setback when the United States moved to make online gambling illegal. Moving on from the UIGEA debacle, the company chose to focus on the European market instead. This proved to be a wise decision as the company continued to expand its portfolio with more acquisitions. By 2012, the company’s 888poker brand had become the fourth-largest poker network in the world in terms of traffic.

Question: Does 888poker take US players?

Answer: 888poker can accept players residing in the United States provided they are physically located within Nevada or New Jersey. It should be noted though that the brand only operates on a permit issued Caesars Interactive Entertainment, its offline partner in the state. For its operations in Nevada, the brand managed to get a license to operate issued and regulated by the Nevada Gaming Commission.

Also critical to note, the US player pool is limited to people physically located within the aforementioned states. 888poker maintains a separate network to accommodate its US players versus their main network of players worldwide. For example, if you’re British you can play against players from all over the world while at home, but if traveling to the WSOP in Las Vegas, you’d have to maintain a separate account with which to play exclusively against American players while you’d be stateside.

Answer: Players will be happy to know that they can join multiple tables at once when they’re using 888poker’s mobile and desktop apps. It should be noted though that multi-tabling support is rather limited if players use the Instant Play/No Download feature of the poker room. Joining a tournament will result in the opening of a new window.

Answer: To reward players for their continued deposits to and play on their accounts, 888poker has its 888poker Club. Players can enter this Club/program anytime and they’ll need to complete Club Challenges in exchange for points. These challenges usually vary in terms of rewards (points) as well as the duration with which they can be completed. As they earn points, players will then get to climb up the levels of this multi-tier program. Progressing through a new level will then unlock additional Club Challenges as well as reward players with Gold Tokens. Once they’ve accumulated enough of these Tokens, players can then have these exchanged for items found on the poker room’s Redeem Page.

Answer: If they opted to take advantage of 888poker’s $88 free bonus, players will first need to make sure that they’re registered and that their email addresses are already verified. The poker room will give players $8 outright but only $1 of this amount is credited to the player’s account. The remaining $7 is then given to the player in tournament tickets. The rest of the $80 is then going to be credited to the players in increments of $8 (with $1 credited to their accounts immediately while the remaining $7 is again given out in the form of tournament tickets. In order for the bonus increments to be released, players are going to need at least 250 Bonus Points (given as a reward for their playing poker). Keep in mind that the bonus increments will require players to wait for 48 hours after they’ve managed to accumulate the minimum number of points needed.

As with the no-deposit bonus, the poker room’s welcome bonus offer is classified as a pending bonus and is also distributed to players in $10 increments. This means that players will first need to fulfill certain goals/conditions before they can claimtheir bonus amount. In this case, players are required to earn 10 Bonus Points for every $1 of the bonus amount.

Question: Can I wager my poker welcome bonus on casino games or in the sportsbook?

Answer: Unfortunately, players aren’t allowed to use any of the bonuses they get from 888poker on other 888 brands (sportsbook or online casino). As mentioned in the answer to the prior question, the wagering requirements for 888poker are decidedly different than that of any online casino (888Casino included). The poker room makes use of a pending bonus system rather than the instant reload bonuses that players would normally come across when depositing funds to their online casino accounts. In the same vein, players won’t be able to use their online casino or sportsbook bonuses on any of the poker room’s tournaments.