Online Poker Players Can Face Problems With The IRS

It seems to have become an annual tradition that as soon as the Main Event champion is crowned at the World Series of Poker, people start talking about how much the final nine players will have to pay in taxes. 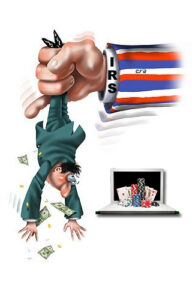 Indeed, no sooner had Qui Nguyen raised his hands (and bracelet) in victory, than the experts were already reporting how much he and his final table opponents were going to have to fork over to Uncle Sam and the equivalent tax agencies abroad (Kenny Hallaert, you lucky SOB!).

The real winners of the World Series of Poker at https://t.co/aWytys2yKN One of the final nine lost over 50% of his winnings to taxes!

What About Online Poker Winnings?

Any US taxpayer holding $10,000 or more in a foreign financial account is required to file a Report of Foreign Bank and Financial Accounts (FBAR). As I’m a US citizen living abroad in Israel, believe me when I say that I know all about FBARs. They’re kind of a pain, but, that said, the FBAR reporting requirement seems elementary once the obligation is known. An FBAR filing is required if you have funds in a foreign account exceeding $10,000. On the other hand, people have incurred huge fines from using online services that are based out of foreign entities. An important question, then, is: Does this affect online poker players? Many poker sites are offshore, so does that make the money in your account a Foreign Bank account?

According to tax attorneys, all income for US citizens is taxable regardless of where it was earned. People might say that Internet gambling is illegal; however, both illegal and legal income is taxed in the US (weird, I know, but it’s true). The IRS can usually track how much an individual wins online, regardless if the taxpayer does not report the income. If the government finds out that you are not reporting the income, not only will you be forced to pay tax, you will also be punished with penalties and interest. While many taxpayers believe that they don’t have to claim their online gambling winnings until their earnings are back into their US bank account, it makes no difference if the income was generated in another country or online.

A perfect case that highlights this issue is United States vs. Hom. Online poker accounts held by Hom triggered an FBAR obligation, and in return for his simple hobby, Hom was fined heavily. He had accounts with PartyPoker and PokerStars, and used FirePay to send money to each entity. The money was held offshore, but the companies are not banks. The accounts were treated as financial accounts to the courts since, at your request, you can have funds stored, transferred, or hold money. The courts interpreted them as foreign banks since they performed functions very similar to a bank. Hom argued that they were not financial accounts and thus not subject to FBAR obligations, but the court thought otherwise.

Read and listen to our interview with poker tax expert Ray Kondler, CPA

What Does All This Mean for Online Poker Players?

The major implication of this issue is that anyone with offshore poker accounts will have to start reporting them. This is not limited to just poker accounts; any digital accounts that you hold overseas are subject to the same obligations. This particular case illustrates the need for an experienced tax attorney. An attorney could have saved Hom a lot of money, but he did not get one to represent him. Hom is facing $40,000 in fines. Attorneys can significantly reduce the amount you need to fork over and might have even been able to sway the court to rule in your favor. Working with a tax attorney will help you avoid the mistakes that Mr. Hom made.